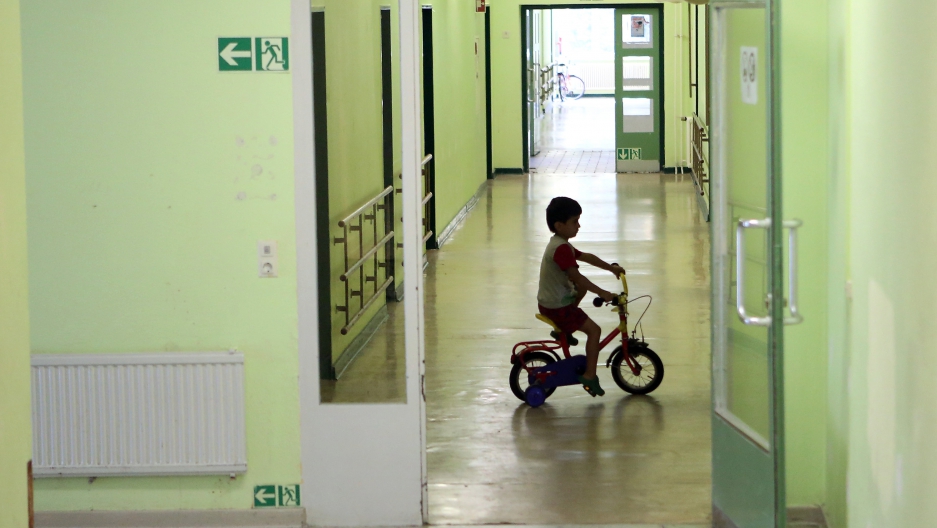 A refugee boy rides a bicycle in a temporary home providing assistance for refugees in Berlin, August 2015. For refugee families, bike donations are key to mobility.
Credit: Adam Berry
Share

LONDON — Europe’s refugee crisis has reached breaking point. Thousands fleeing war, poverty and civil unrest have arrived — to open hostility from some governments, and open arms from many citizens.

Floods of donations from people giving aid, even when their governments have offered little, have made their way to refugees in London, France and Greece. Germans swamped them with so much food, clothing and toys that the police had to tell them to stop.

One unexpected item is high on the list of priority donations: second-hand bikes, prized for easing the strain of life in makeshift refugee camps.

Following the exceptionally dangerous journey to reach Europe, which has seen more than 2,500 die this year alone, refugees face the hardship of finding food, shelter and water in a different and disorientating environment.

More than 1,000 secondhand bikes from all over Europe have made their way to Syrian, Nigerian and Eritrean refugees living in makeshift camps in Calais, northern France.

In August alone, a record 97 bikes were donated through one London charity, The Bike Project, which refurbishes and donates bikes in Britain and sends them to refugees.

"Inspired by my experiences of working with refugees as a youth worker, I could see that lack of mobility was a huge...obstacle to refugees’ capacity to lead a meaningful life," says Jem Stein, the founder of The Bike Project.

The bikes mean refugees in Calais can travel to get food and water four times faster than on foot, and with the capacity to carry fives times as much load.

Getting basic supplies requires a journey of at least five miles round trip from the refugee camps. Although that’s nothing compared to the thousands of miles the migrants have traveled to reach the shores of Europe, having a bike makes life much more manageable for the refugees once they arrive.

“I’d been moved to donate the bike because, out of the cold inhumanity in so much policy, reporting and public comment, I wanted to provide some small gesture," said Londoner Julian Sayarer, "to show the refugees in the camp that people in the world did care about their plight and did want to help them.”