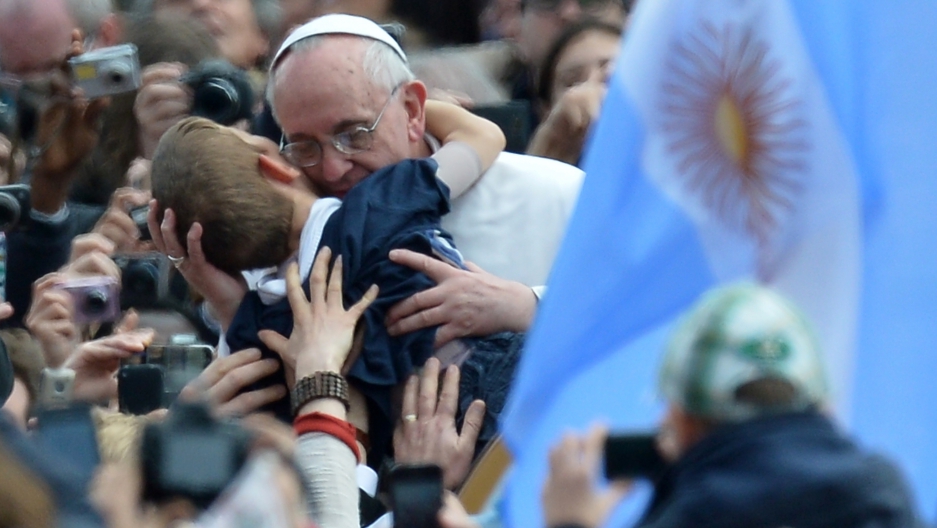 Pope Francis holds Dominic Gondreau in his arms after celebrating the 2013 Easter mass at the Vatican.

Pope Francis has come to signify a change in the leadership style of the Catholic church, advocating many principles and ideologies of people around the world on issues of social justice, civil and human rights.

And if a picture is worth a thousand words, many believe one image in particular personifies the character of Pope Francis that many have come to embrace — a character steeped in a mission to reach out and serve the poor and less fortunate.

It was Easter Sunday in 2013 when he embraced 8-year-old Dominic Gondreau. Dominic, who has cerebral palsy, was with his family as the pope toured Saint Peter's Square, following mass.

Dominic's father, Paul Gondreau, says as he watched his son on the jumbotron in Francis's embrace, it became clear that it was an incredible moment for his family and "nothing short of a miracle."

More on the pope's visit

Everybody loves Pope Francis, even atheists

As the Pope's US visit nears, these fourth-graders prep their questions

Gondreau, a Catholic theologian at Providence College in Rhode Island, was spending a semester in Rome with his family when they decided to attend the Easter Sunday celebration.

“The world was getting to know Pope Francis, who had just come into his new role three weeks prior to the celebration of Easter Sunday Mass, and there was a lot of attention on Rome,” Gondreau says.

The iconic image almost didn’t come to pass, according to Gondreau.

“I have five children and to get the children rounded up and off to Saint Peter’s Square early in the morning, with daylight savings time no less, was not the easiest feat in the world.” Gondreau says his family was running late and there were a quarter of a million people waiting to see the pontiff. Dominic was invited to go up front to the disabled section with his mother, while his father stayed back in another seating section with their other four children.

At the end of Mass, the pope began his tour. Gondreau's oldest son Lucas, who was 12, looked up to the jumbo-tron and watched as Francis reached out to Dominic from the Popemobile.

"When the embrace with Dominic occurred, my oldest son kept saying, 'it’s Dominic, it’s Dominic.' I looked up at the jumbotron and saw Pope Francis embracing my son and I was moved to tears. Lucas and I stood there shocked and in total disbelief.”

The photograph has since became an Iconic image and Gondreau says he believes it came to define this pope.

“The image speaks to a familiar theme that Pope Francis is sending around the world, which is that Catholic-Christians need to reach out to the margins and serve the poor, reach out toward the fringes. ... What we saw in that embrace is what he meant by the poor ... those who have disabilities, or special needs, those who are lonely or suffer psychological impairment or emotional wounds, and expressing our love for the poor.”

Gondreau says his son knew who the pope was and he broke into a great smile. But what was extraordinary was that Dominic, who has severe physical limitations with normal cognitive abilities, put his arm around the pope, which is unusual because his disability prevents him from immediately processing that kind of intentional movement with his body. That he was able to do it on the spot, with a quarter of a million people watching, is nothing short of a miracle, his father says.

Gondreau says his son has never revealed what Francis whispered in his ear that day.

A version of this story first appeared on WGBHNews.org