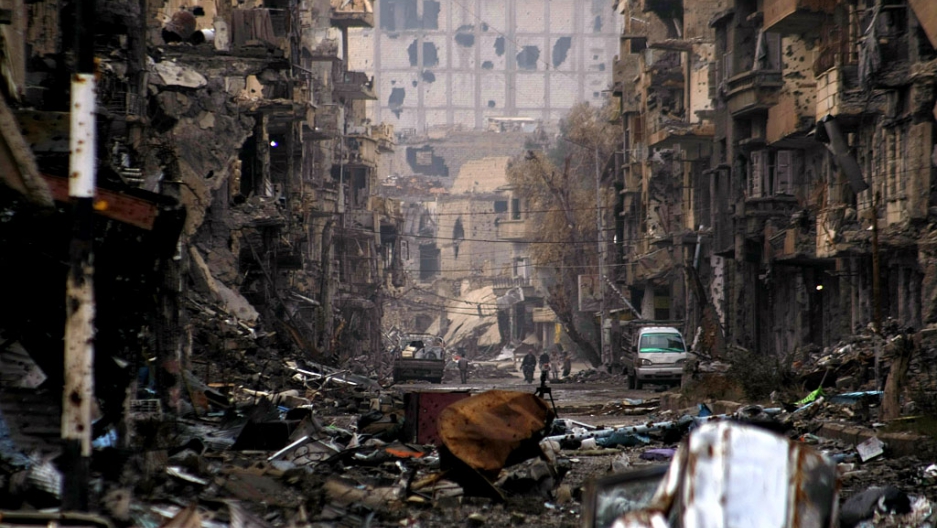 Syrians walk along a severely damaged road in the northeastern city of Deir Ezzor on Jan. 4, 2014.
Credit: AFP
Share

BOSTON, Mass. — The award-winning news site GlobalPost announced today the launch of its most ambitious-ever reporting initiative, a yearlong in-depth series called “Longreads on Conflict,” which is aimed at revealing the full extent of the humanitarian toll from major conflicts raging in the Middle East and investigating the responsibility borne by governments and leaders in the region and by major world powers. The series launches Sept. 24 and will continue each month through June 2016.

“Many of the most powerful and important stories from GlobalPost since our launch have come from conflict areas and we have a deep commitment to continue to tell the stories of people whose lives are torn apart by war,” said GlobalPost Founder and CEO Philip Balboni. “We set out with an ambitious idea for this project to find leading international journalists with deep experience and authoritative voices on conflict, and then to give them the time and funding required to deliver the kind of long-form pieces that are rare in digital journalism. We are profoundly grateful to all those who by their generous financial support have made this series possible.”

“Longreads on Conflict” will be rooted in great storytelling, with each major report running at approximately 5,000 words or more and augmented by photography, video, maps and graphics that will help bring the stories and the issues to life.  It will be designed to draw readers in and to engage them in a way that will get them thinking about the people suffering from these conflicts and the issues that have caused them in the first place.

“Many of the pieces will focus on the humanitarian impact of the wars and will detail the desperate plight of the people caught in the middle of all the fighting,” said GlobalPost’s Peter Gelling, the project’s editor. “Other reports will be more investigative in nature and will look for evidence on the ground that implicates the governments and groups that are prolonging these conflicts. We have secured some very talented journalists and I have high expectations that this series will be a consequential addition to conflict reporting — at a time when it couldn’t be more important to give people the information they need to understand the underpinnings and the consequences of the wars raging in the Middle East and North Africa.”

The inaugural report will be from one of the world’s leading war reporters, Paul Wood of the BBC, who will write about the devastating impact of the war in Syria, now in its 5th year.

Paul Wood is a veteran foreign correspondent for the BBC who has reported on a dozen conflicts, from Syria, Iraq and Afghanistan to Ukraine, Israel/Palestine, and the Balkans. For the past four years, Wood has covered the civil war in Syria and the rise of the Islamic State while based in Beirut. He has won the Peabody Award, two Emmy Awards, a Sony Gold, and has twice received the David Bloom Award from the Radio Television Correspondents Association. He has been named Journalist of the Year by the UK Foreign Press Association. Wood was in Baghdad during the US invasion of Iraq in 2003 and was embedded with the US Marines during the bloody battle for Fallujah in 2004. In addition to his television work for the BBC, Wood has written for a number of British and US publications. He is working on a book about the Middle East and will be spending the fall semester of 2015 as a Fellow at the Shorenstein Center on the Media, Politics and Public Policy, Harvard University’s Kennedy School of Government.

The second report in October will be from another of the world’s most distinguished journalists, foreign correspondent and author Stephen Kinzer, who will focus on how the Iran nuclear agreement and the deep entanglements Iran has in the region will profoundly change the future of the Middle East.

Stephen Kinzer is one of America’s most distinguished foreign correspondents and has reported from 50 countries on five continents. He is the author of eight books including most recently “The Brothers: John Foster Dulles, Allen Dulles, and Their Secret World War” which novelist John le Carre called “a shocking account on the misuse of American corporate, political and media power.” Other recent books include “Reset: Iran, Turkey, and America’s Future, Overthrow: America’s Century of Regime Change from Hawaii to Iraq,” and “All the Shah’s Men: An American Coup and the Roots of Middle East Terror.” For more than 20 years, Kinzer was a foreign correspondent for The New York Times. As the Times bureau chief in Nicaragua from 1983 to 1989, he covered war and upheaval in Central America and wrote two books about the region – “Bitter Fruit: The Untold Story of the American Coup in Guatemala” with Stephen Schlesinger, and “Blood of Brothers: Life and War in Nicaragua.” He won the Maria Moors Cabot Award in 1988 for outstanding coverage of Latin America. From 1990 to 1996, Kinzer was the Times bureau chief in Berlin covering the emergence of post-communist Europe including the wars in Serbia, Bosnia and Croatia. In 1996, he was named chief of the Times’ newly opened bureau in Istanbul, from which he traveled and reported widely in Turkey, Central Asia and the Caucasus, wrapping up his time there with his book “Crescent and Star: Turkey between Two Worlds.” Before joining the Times, Stephen was Latin America correspondent for the Boston Globe and he is currently a Visiting Fellow at the Watson Institute for International Studies at Brown University.

Later this fall the series will turn its attention to the conflict raging in Yemen, with ground-level reports from Sharif Abdel Kouddous, a leading independent journalist based in Cairo.

Sharif Abdel Kouddous is a correspondent for the TV/radio news hour Democracy Now! and is a fellow at the Nation Institute. From 2003 to 2011, Kouddous served as a senior producer, co-host, and correspondent for Democracy Now!, reporting from Baghdad during the invasion of Iraq, from New Orleans in the aftermath of Hurricane Katrina, and from Haiti in the days after the January 2010 earthquake and during the return of former president Jean-Bertrand Aristide.

In January 2011, Kouddous returned to Egypt to cover the uprising against then-President Hosni Mubarak, and he has been on the ground reporting extensively on developments in Egypt and other countries in the region over the past four and a half years. Since 2011, he has reported from Syria, Libya, Yemen, Gaza, Bahrain and Algeria. His work has been published in the Nation, the Washington Post, the Los Angeles Times, Foreign Policy, the Toronto Star, and the Progressive, among others.

Kouddous is also a frequent guest on international news channels, including BBC, NPR, MSNBC, CNN, Sky News, Al Jazeera, CBC (Canada), ABC (Australia), as well as many public radio stations across the US and Canada. He also works as a freelance correspondent for France 24's English language channel. In 2012 Kouddous was awarded the fourth annual Izzy Award for outstanding achievement in independent media for his coverage of the Egyptian revolution.

About “Longreads on Conflict”

“Longreads on Conflict” is GlobalPost’s yearlong series aimed at shining a light on some of the world’s most dangerous conflicts and at telling the human stories of war at a critical time in our history. The series is supported by a grant from the Goldhirsh Foundation and by generous individual donations including from Steven Rattner of New York City.

GlobalPost is an award-winning world news site with outstanding original reporting from country-based journalists in all regions of the world. Noted by The New York Times as “offering a mix of news and features that only a handful of other news organizations can rival,” GlobalPost offers fresh, in-depth perspective on the changing global picture that affects us all by combining traditional journalistic values and the power of new media.