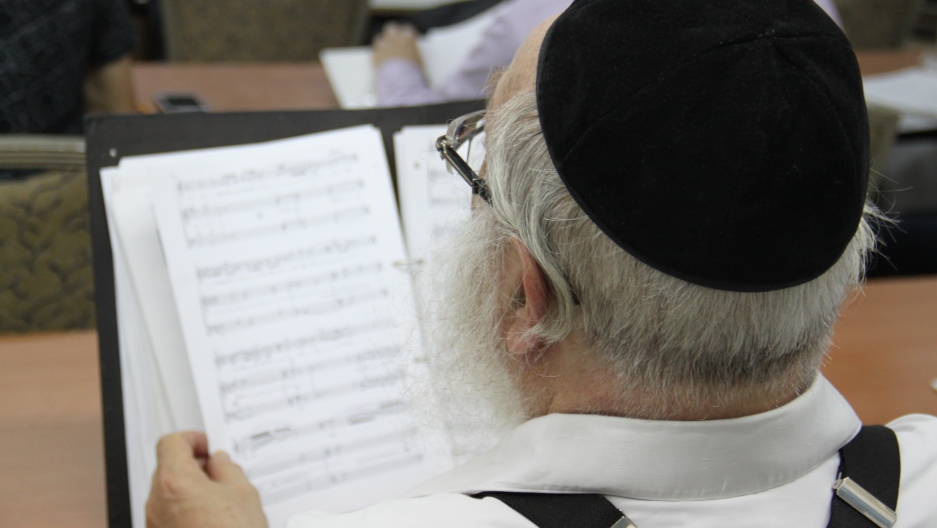 Cantor Chaim Adler looks over the sheet music from the Kol Nidre prayer, sung on the eve of Yom Kippur, the Jewish Day of Atonement.

The best opera concert in Jerusalem is free — it’s performed by the male a cappella choir during prayers at Jerusalem’s Great Synagogue.

The choir’s most important and grueling performance of the year starts Tuesday after the sun goes down, when Yom Kippur, the Jewish day of intense prayer, begins.

It’s a day of no food and drink — which means the choir has to sing in four-part harmony all day long, without even a sip of water.

At a recent rehearsal, 13 men wearing yarmulkes sat at desks in three rows, like Hebrew school. Many of them are immigrants — from places like Holland, France, South Africa — and rehearsals are held in a mix of Hebrew and English.

Standing in the front was their Israeli conductor, the stout, energetic Elli Jaffe. He sang out the starting note for each section in quick succession before lifting his hands in the air.

“OK? Let’s go,” he said — and the choir began practicing a four-part accompaniment for Kol Nidre, the most haunting prayer of the Yom Kippur service.

They rehearsed it again, this time with 76-year-old cantor Chaim Adler.

A choir may seem more fitting for a church than a synagogue, but choral music was a central part of the European Jewish synagogue tradition for centuries, going back to at least the 16th century. 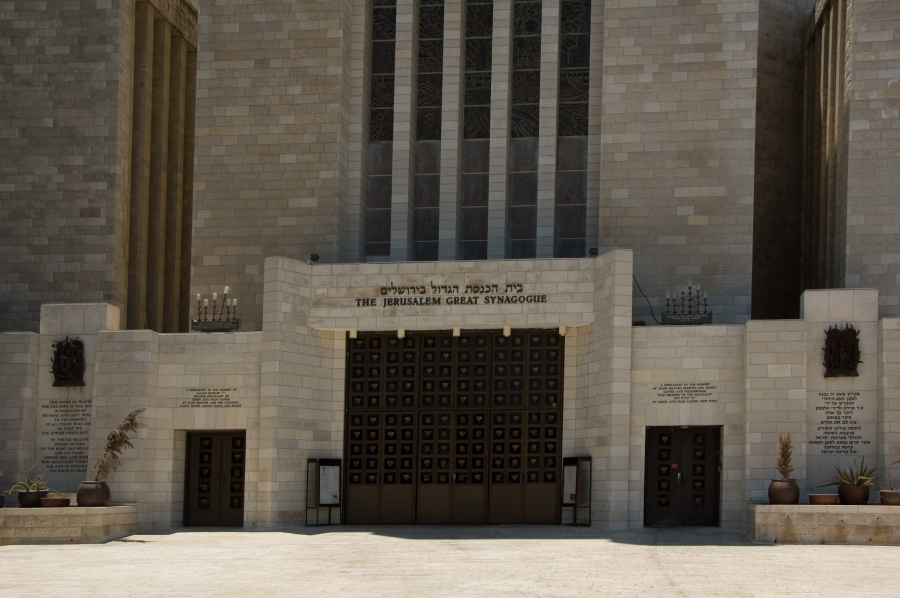 The tradition was disrupted by the Holocaust, but in the last two decades there has been a revival of cantorial choirs and cantorial music, Jaffe said.

“Jewish music is identified by its duty. People are feeling the atmosphere ... which today is Yom Kippur,” Jaffe said. “That’s what our choir is all about. It’s not just the notes. It’s a part, and an important part. But it serves something and is not being served.”

The Jerusalem Great Synagogue Choir is the only institutional synagogue choir in Israel. No other choir in the world is expected to do what this choir does.

Orthodox Judaism forbids using electricity and musical instruments during Sabbath and holidays, so the choir uses no microphones or amplification. There is a rabbinic debate over whether tuning forks are permissible, but Jaffe’s choir doesn’t use one.

When the cantor, the chazzan, sings, Jaffe quickly belts out the four starting notes for the choir.

“A lot of the service is improvised, especially by the chazzan — and we have to support the chazzan — so I give the tones immediately,” Jaffe said.

Jaffe conducts major orchestras and choirs around the world: He’s the laureate conductor of Prague Symphony Orchestra, and has also conducted the Vienna Radio Orchestra and at the Bolshoi in Moscow.

“I saw many great conductors and choirs singing, for example, the Verdi Requiem,” Jaffe said. “The choir was singing every note, everything was clean, everything was there. But somebody was not a believer. Somebody who was in charge did not believe in God.”

The difference between the Jerusalem Great Synagogue Choir and many other choirs, Jaffe said, is “they don’t just think about the notes. They really mean what they say and they really pray while singing.”

At one point in the rehearsal, Jaffe sang out one of the harmonies.

“It’s not enough just to sing the note,” he told the choir, singing the passage. “You’ve got to reach bar 101. This is the climax. The whole accompaniment should lead to that.”

For Jaffe, directing the chorus serves a high purpose.

“When I come to synagogue, I know I do it for the almighty,” Jaffe said. “Music is a gift of the almighty.”

At the end of rehearsal, the choir practices the climax of the Yom Kippur prayer service, when the cantor and the choir sing “The Lord is God” in Hebrew seven times.

Last year, Jaffe got so caught up in the moment that he accidentally led the choir in an eighth repetition.