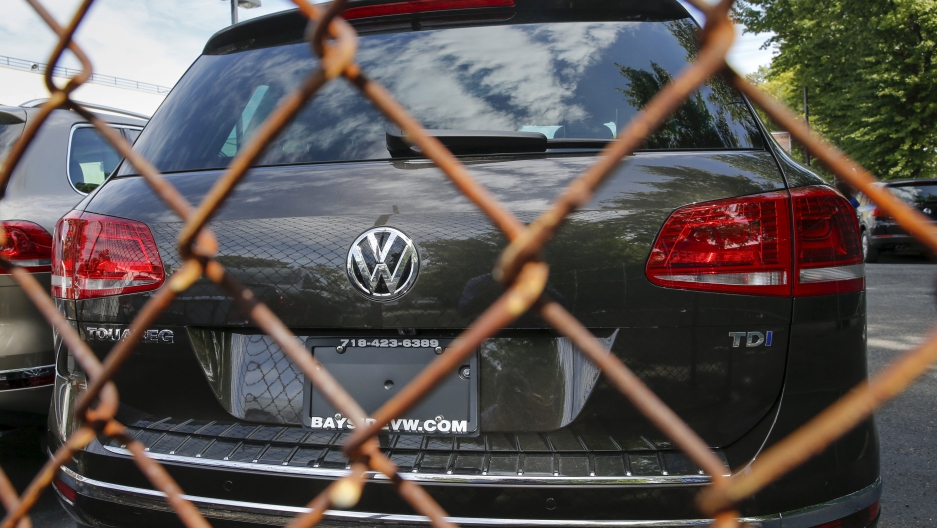 A Volkswagen 2016 Touareg TDI is seen at a VW dealership.  Volkswagen shares plunged more than 20 percent on Monday, their biggest ever one-day fall, after news that the German carmaker had rigged U.S. emissions tests.

Volkswagen has done for diesel engines what Lance Armstrong did for competitive cycling. And regulators, as with Armstrong's cycling competitors, are asking: Have other automakers cheated as well?

"Just to put this in perspective — this is like that 215-calorie Snickers bar having 2,150-8,600 calories instead,'' wrote University of California Berkeley professor Maximillian Auffhammer. "This is not one student cheating on an intermediate microeconomics exam and thinking (s)he would get away with it. This is the world’s largest car manufacturer intentionally deceiving the federal and state governments by gaming their enforcement strategy."

In addition to fines, the automaker is facing a massive recall and the Department of Justice also announced its own investigation into Volkswagen's actions. Late Monday, the Detroit News reported the diesel investigation was expanding to the 3-liter V6 diesel engine used on Audis and the Porsche Cayenne.. Consumer lawsuits are also expected.

“It appears that they used something that’s being described as a defeat device,“ says automotive reporter Paul Eisenstein, who’s written about this story at DetroitBureau.com. “Its not an actual device, it not like they put some black box under the hood. But what they did was they wrote in software into the engine controller that operates the engine and all the pollution control technology. As a result it was able to figure out when the cars were being tested and when they were, it toughened up the emissions control system so it put out less particulates and less oxides of nitrogen, which are related to smog, and then when the cars were back on the road apparently a lot of those control systems were deactivated.”

The result is a lot of pollution that doesn’t get picked up during annual inspections and emission testing. The illegal software was specifically made and installed in vehicles with 2.0-liter diesel engines from 2009 to 2015 in the Jetta, Beetle, Golf and Passat models, as well as the Audi A3, according to the EPA. The announcement sent Volkswagen's stock price tumbling 20 percent Monday, it's biggest-ever one day decline.

"I personally am deeply sorry that we have broken the trust of our customers and the public. We will cooperate fully with the responsible agencies, with transparency and urgency, to clearly, openly and completely establish all of the facts of this case," he said. "We at Volkswagen will do everything that must be done in order to re-establish the trust that so many people have placed in us, and we will do everything necessary in order to reverse the damage this has caused."

The company said it launched an internal investigation.

But there's a question now whether other automakers used the same trickery. Eisenstein says federal and state investigators are “looking at the software used by all sorts of manufacturers to make sure this sort of deception isn’t more prevalent than we realized.”