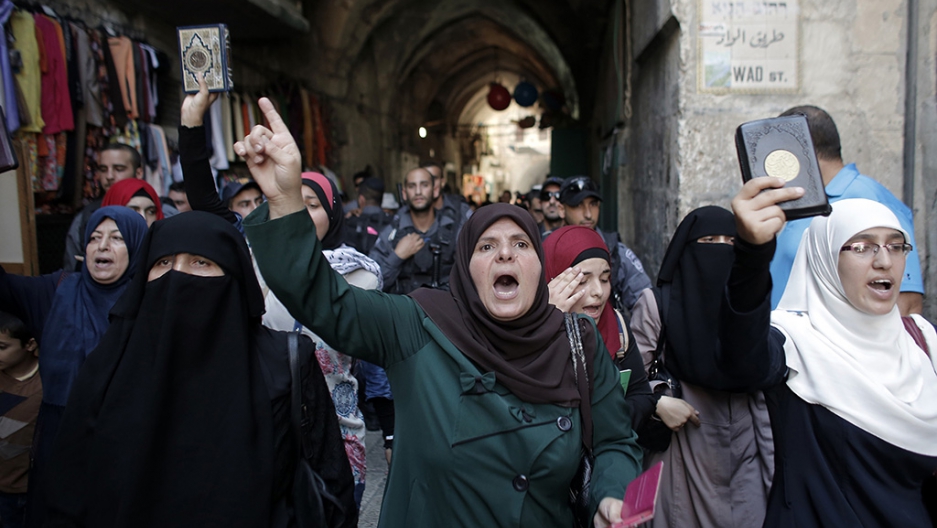 JERUSALEM — Over the past week, violence has yet again surged throughout this city, leaving one Israeli dead and nearly 30 Palestinians and a dozen police officers wounded, some seriously.

While most of the violence has been focused on the religious site known to Muslims as the Haram al-Sharif (the Noble Sanctuary) and to Jews as the Temple Mount, flashpoints have appeared throughout the city.

This latest round of violence broke out in the days preceding Rosh Hashanah, the Jewish New Year, which fell on Sept. 14 and 15. Israel's Agriculture Minister Uri Ariel ascended the Mount and announced his intentions to pray there, despite decades-old regulations against Jewish worship. Muslim leaders called on the public to "defend" their holy places, and intermittent skirmishes followed.

On the morning of Sept. 13, Israeli police deployed in force on the Mount. According to their public statements, they were acting on intelligence that Palestinian extremists were planning to attack Jewish worshippers at the Western Wall (an ancient retaining wall for the Mount that is also holy to Jews). A group of Palestinians, mostly teens, came out of the mosque armed with rocks and attacked the police, who responded with tear gas and stun grenades.

That night, an Israeli man was killed in southern Jerusalem when his car crashed into a wall after it was pelted with stones.

The week before, Israeli Prime Minister Benjamin Netanyahu convened an emergency inner-cabinet meeting and announced that his government intended "to give tools to the police and soldiers to act very aggressively against those who throw rocks and petrol-bombs."

The measures, which have been approved only through October, give soldiers and police greater leeway to open fire on those who throw stones, bottles, or explosives. The measures also increase the minimum penalties for stone-throwers and “massively” impose fines on the families of minors proven to be tossing stones.

The police have deployed an additional 800 officers in Jerusalem, redefined the areas of command in East Jerusalem and approved the allocation of undercover units that, until now, have worked almost solely with the army in the West Bank.

Throughout the city, especially in Palestinian areas, incidents of rock and molotov-cocktail throwing are becoming more frequent.

The residential Armon Hanatziv neighborhood in southern Jerusalem has been a particular focus of violence. Lying next to a popular promenade enjoyed by Israelis and Palestinians as well as tourists, the neighborhood is over the Green Line that marks Israel's pre-1967 border with Egypt. Although it's adjacent to the Palestinian village of Jabl Muqaber, most Israelis regard it as an integral part of the city.

Almost every night for over a week, teenagers from Jabl Muqaber have been pelting homes in Armon Hanatziv with firebombs, rocks, fireworks and paint-filled bottles. The municipality is reported to be building a 12-foot wall between the locales — a measure that may increase tension, since it will limit access from the village to other parts of Jerusalem.

On Sept. 17, the United Nations Security Council issued a statement expressing "grave concern" and calling for "restraint and calm." Earlier the same day, as confirmed by the White House, Saudi Arabia's King Salman Abdul Aziz spoke with President Barack Obama and condemned the "dangerous Israeli escalation at the Al-Aqsa Mosque" and called the Israeli behavior "an offense against the Islamic holy places."

But emphasizing the sacred centrality of the Noble Sanctuary to Muslims, Jordanian King Abdullah II told a group of Israeli Arab ministers visiting his country on Sunday that "Al-Aqsa Mosque ... is a place for Muslim prayer only."

The atmosphere around the holy site typically heats up during the Jewish High Holy Days, as some observant Jews seek to ascend the Mount, which they regard as the location of the first and second Holy Temples. Muslims believe that the Prophet Muhammad was transported from Mecca to Jerusalem during his journey to heaven.

But the city has been particularly tense since last year's Gaza War and the murder of a Palestinian youth in revenge for the kidnapping and murder of three Israeli youths. With the exception of some Jewish neighborhoods such as Armon Hanatziv, the violence has been largely confined to the Palestinian neighborhoods in East Jerusalem.

East Jerusalem, lying over the 1967 line, is considered occupied territory by the United Nations.

This year, Yom Kippur — the holiest day in the Jewish calendar and a sacred fast day — falls on the same day as the Muslim holiday Eid al-Adha (the Feast of Sacrifice), marked by joyous feasting and celebration. That has raised anticipatory tensions on all sides ahead of Sept. 23.

Both Israelis and Palestinians have been attempting to challenge the tenuous status quo on the Mount. According to a long-standing agreement, non-Muslims are not permitted any form of prayer on the Temple Mount and are allowed to visit only between Muslim prayer times.

But Jewish hard-liners (like Minister Ariel who ascended the Mount before Rosh Hashanah), emboldened by the establishment of Israel's current right-wing government, have openly declared that they hope to gain permission for Jewish public prayer and to increase the hours that non-Jews are allowed to visit the Mount.

Netanyahu has emphatically stated that he has no plans to change the status quo, but he has refrained from rebuking politicians such as Ariel, who are crucial for the survival of his narrow majority government.

For Muslims, protecting Islam's holy sites is viewed as a sacred commandment, and there is deep suspicion of Israeli intentions. Over the past year, two Islamic organizations — the Mourabitoun (men's division) and the Mourabitat (women's division) — have been "taking up guard" at the holy site, heckling and occasionally even attacking non-Muslim visitors whom they perceive as disrespectful or trying to pray.

Israeli authorities declared both the Mourabitoun and the Mourabitat illegal and banned them from the Mount. On Friday, they prayed at another site nearby, where they also clashed with police. No injuries were reported.

Israel's relations with Hamas seem to be adding fuel to the current unrest. Since hopes for a long-term cease-fire agreement with Israel fell apart, the group has apparently resumed its tactics of pushing for violence in both the West Bank and Jerusalem.

During calmer times, Palestinians and Israelis cross the city. But during this volatile period, with the exception of religious Jews, few Israelis are visiting the Old City or East Jerusalem, and Palestinians are staying away in droves from the western parts.

Both sides know that, in fact, there is little that Israel can do to quell the violence. Much of it isn't organized, and many of the rock-throwers are teens, even children. It seems unlikely that Israel will use the more lenient open-fire regulations against them, especially in Jerusalem, where international pressure remains constant and where it wouldn't take much to escalate the violence.

It's hard to tell what the diplomatic fallout will be. Israel's relationships with Jordan and Egypt, and its indirect relationships with the Gulf states, have deepened thanks to Netanyahu's strident opposition to the pending US agreement with Iran. But it is likely that, should the violence continue, concern for the welfare of Islam's holy site will trump these diplomatic considerations.

Israeli and Palestinian politicians alike will recall that Prime Minister Ariel Sharon's 2000 visit to the Mount lit the fuse that ignited the second intifada.