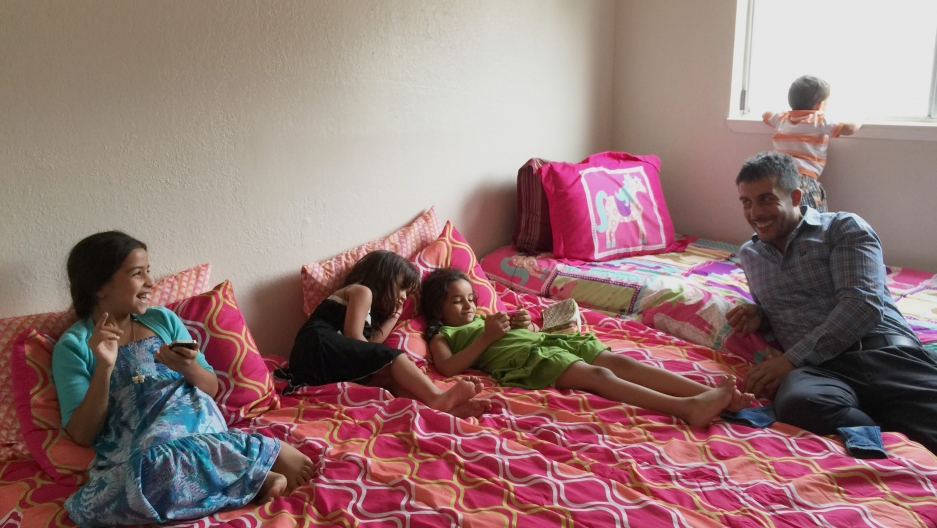 Gasem Al Hamad and his children in their new home in Turlock, California. He and his wife fled Syria with their kids after several family members were tortured or killed as the civil war rages on. Al Hamad is now a halal butcher at a nearby slaughterhouse.

There were many reasons to leave.

Wajed al-Khalifa talks about what happened to her brother in Homs, Syria’s third-largest city. He was pulled over at a military checkpoint, accused of being an anti-government activist, she says. He was tortured and nearly killed.

Her husband, Gasem al-Hamad also has his reasons — what happened to his brothers. One was killed by a barrel bomb, a crude unguided weapon filled with explosives that fell in his neighborhood. Another brother went missing.

“We were looking in the hospitals and police stations,” he says. “All of a sudden, a friend of ours called and he said, ‘There’s someone on the street who looks like your brother.’” It was. His brother had been tossed on the street dead, bound by his hands and feet. He worked at a sugar factory when Syrian soldiers — arbitrarily, al-Hamad says — rounded him and others up, suspecting them of being on the wrong side of the civil war. Al Hamad says his brother stayed clear of politics, but the violence is indiscriminate.

The next day, the couple fled with their young children.

Now, everything’s different. In February, they arrived to Turlock, a small city in rural northern California. There aren’t many Syrians here, but rent is cheaper than San Francisco, even though there are more Syrians there.

Their journey was also long, three years in all, after living in a refugee camp in Jordan. There were numerous interviews and security checks until, finally, they got word that they would be resettled in the United States. “It’s utter and pure luck,” says Karen Ferguson, executive director of the International Rescue Committee (IRC) in northern California.

There’s no doubt about that. The family is among the few the US has accepted as refugees since the war began in 2011. With millions leaving Syria, the US has accepted about 1,500. Under intense pressure to accept more refugee — from Syria, but also Afghans, Eritreans and Iraqis also fleeing war — the US recently announced it would increase the number of refugees it takes in to 100,000 in 2017.

Al-Hamad says he and his family would have been happy anywhere they felt safe. “Sweden, the United States, wherever. We are so thankful to be here,” he says.

Their small apartment, in a large but quiet complex near a state university and a park, is also filling up. The kitchen is stocked with donations from neighbors. The IRC also purchased a table for six, along with other basic furniture. Their closets are filled with donations, too. That’s something, considering the family’s only material possessions from Syria are a few photos. The couple’s 9-year-old daughter, Arwa, keeps them tidy in a small album. Pictures show the relatives left behind: al-Khalifa's mom and her two brothers, who are disabled and can’t make the journey out of Syria.

It’s a reality that weighs on the parents, but they’re trying to focus on building a life here.

Al-Hamad, who was a farmer and truck driver before, got a job fast as a butcher at a slaughterhouse. He knows how to cut meat according to Islamic law, the halal way, and the skill is in demand as California’s Islamic community grows.

The family also wants to meet people, and people here want to meet them. Their neighbor, Amen Echek, who stopped by their apartment on a recent afternoon, remembers seeing the family when they first came to the mosque in Turlock. Everyone spotted the newcomers right away. “Each family member brought in something, contributed something,” says Echek, who is Palestinian American. “They’re lonely. They don’t know anybody around here. They don’t have the language. Nothing, nothing.”

Among the donations was a widescreen television, which dominates the family’s small living room. Al-Khalifa, the mom, says it’s mostly for the kids’ shows. “I don’t watch the news now. I get sad,” she says.

But both parents say they want to return to Syria one day when it’s stable. Where they will live, though, is another question. They just got bad news about their home. “I received some pictures. Destroyed,” says al-Hamad.

So they’re focused on being here, and exploring California in the family’s first big purchase: a mini-van. A friend at the mosque gave them a deal.

Tomorrow, al-Hamad takes the driver’s test. It’ll be a challenge for him, but nothing compared to what he and his family have survived. 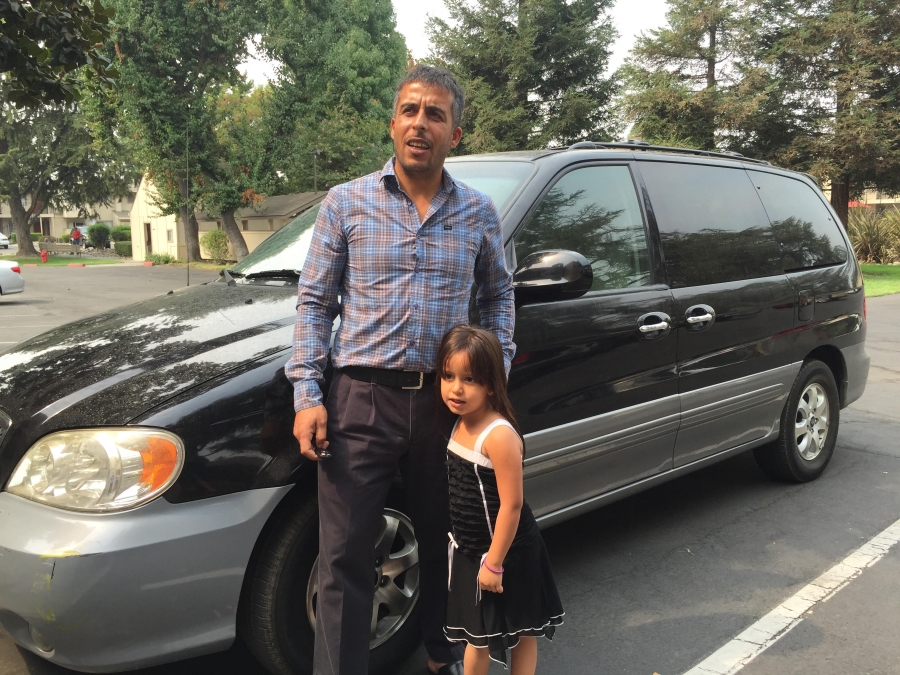 Gasem Al Hamad and his daughter, Rawan, next to a used minivan they recently purchased. The Syrian refugee family arrived to Turlock, California, in Feburary.