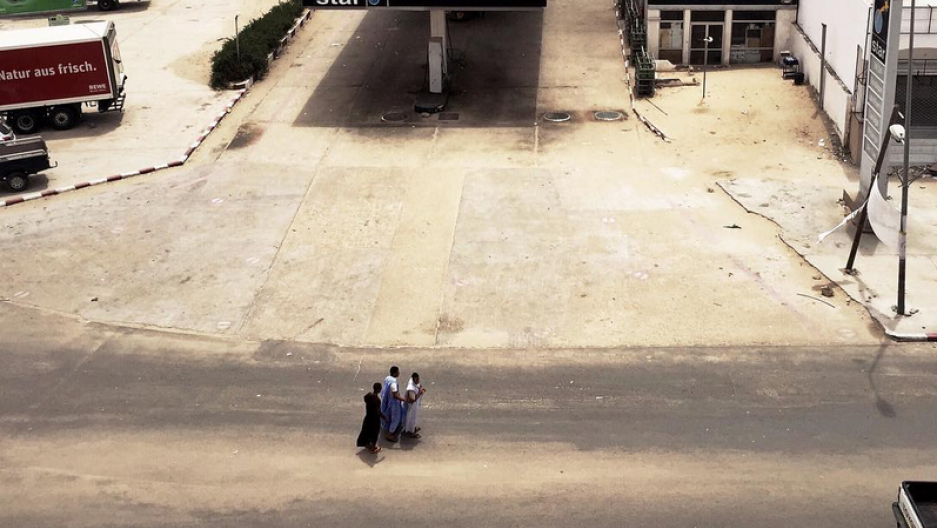 NOUAKCHOTT, Mauritania — A dusty outpost at the western edge of the Sahara Desert might seem like an odd refuge for Syrians fleeing civil war.

But at a time when tens of thousands of migrants are desperately seeking a way into Europe, isolated, impoverished Mauritania is a rare country where the borders remain wide open to Syrian refugees.

Dusk at the Western edge of the Sahara.

Abdelaziz Abdelrizack, a representative of Syrians in Mauritania, has closely followed the reports of his countrymen fleeing to Europe by foot or making perilous journeys by boat.

“Compared to those people we are lucky,” he says.

Abdelrizack, 52, a pharmacist, arrived three years ago, soon after the Syrian conflict began. His hometown of Daraa, the starting point of anti-regime protests that preceded the civil war, suffered greatly when the Syrian army laid siege.

“You can’t imagine. People were being killed like flies,” he says.

And the carnage in Syria has continued: “Cousins, nephews — killed. Two daughters of my uncle are missing,” he says.

Mauritania, an Islamic country at the crossroads of sub-Saharan Africa and the Arab north, is culturally similar to Syria, migrants here say. Most importantly, Syrians don’t need a visa to enter — unlike in other Arabic-speaking countries. The typical route is via Beirut to Istanbul, and then to Nouakchott on the direct flight operated by Turkish Airlines.

It costs about $1,000 for a ticket — cheap, compared to what trips to Europe with smugglers can cost — and the majority of Syrians in Mauritania arrive with some financial resources. But the cost of living here is high, though the country is among the least developed in the world.

Jobs are few and far between. Some Syrians have found part-time work in restaurants as waiters and cooks. A smaller group can be found begging in the streets of Nouakchott.

Most have kept a low profile, fearing a government that they believe is still close to the Syrian regime.

While the UN refugee agency's office in Nouakchott says it helps Syrian refugees with education and health care, giving cash to pay school fees or for medication, most haven't registered with the UNHCR.

While Mauritania has been a safe haven, many Syrians feel stuck here, unable to travel even to neighboring countries.

Only 112 of the estimated 500 Syrians here are officially registered as refugees.

Mauritania’s president, Mohamed Ould Abdel Aziz, has in the past been an ally of Syrian president Bashar al-Assad. Many Syrians are worried about causing trouble for family members back home.

Abdelrizack is less concerned, having gone to school in Algeria and visited Mauritania while working as a trader in the region. But he understands the fear.

“They can’t publicly say they are refugees because they could have problems with the Syrian embassy here,” he says. “We came from a dictatorship. We are scared of everything — we are paranoid.”

While Mauritania has been a safe haven, many Syrians feel stuck here, unable to travel even to neighboring Senegal or Morocco.

Flooded streets of Nouakchott from the rain maybe a week ago. High water table means it takes ages for puddles to disappear.

Some families facing serious health problems are desperate to leave, so they can seek treatment abroad, but can’t get visas because they are refugees.

“We are asking the UNHCR every day to take care of these cases of cancer or epilepsy, to help us evacuate them abroad, but we don’t get any help from them,” Abdelrizack says.

The UNHCR says it provides "targeted assistance" on a "case-by-case" basis. Last month the agency resettled a Syrian family in Denmark because of medical needs that couldn't be met in Mauritania.

A handful of Syrian migrants have tried to reach Europe from here via Morocco and Algeria, but most say they will leave only by legal means.

Abdelrizack, for one, has been furiously applying to go to Germany, Canada, the United States — anywhere.

“We’re not in the worst situation of Syrian refugees in the world,” he says. “We’re not that desperate.”

But Abdelrizack adds that life in Mauritania isn't easy, with few long-term prospects, and he is anxious to leave.