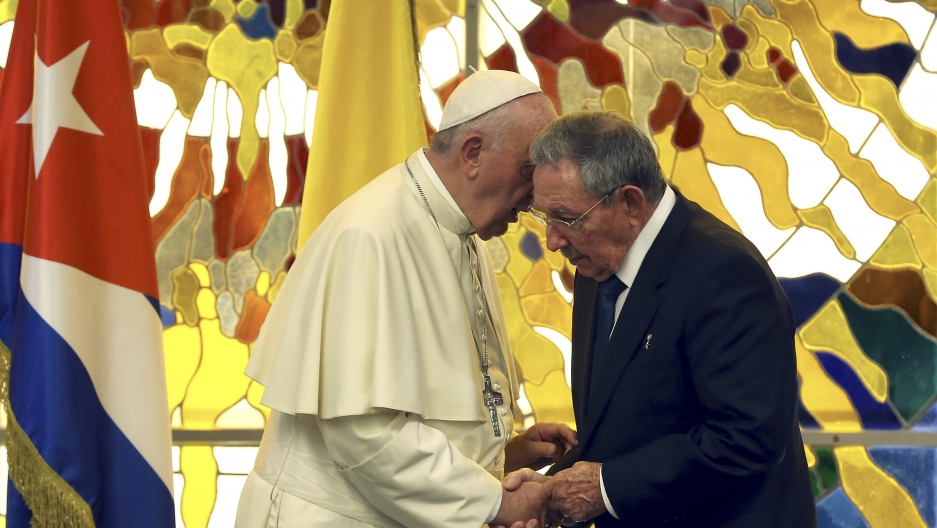 Behind the hoopla surrounding Pope Francis' first visit to Cuba there's no shortage of political maneurving.

"I feel that in a way, the pope is being used by the Cuban government," says Cuban installation and performance artist Tania Bruguera. "Raul, who has demonstrated that he's a very skillful politician, is using this [visit] to negotiate the end of the embargo with the United States, so he's using the political leverage of the pope."

Bruguera spent much of the past year stranded in Cuba. Officials there confiscated her passport after she tried to stage an open-mic performance in Revolution Square in Havana. Now she's back in the US and a fellow at Yale, but remains in close touch with colleagues back on the island.

She says Cubans still lack freedom of expression, and points to the recent arrest of grafitti artist and human rights activist El Sexto, as well as the mounting pressure on independent film producers on the island. Bruguera says the Cuban government recently closed a theater company that was trying to perform Eugène Ionesco's absurdist drama Exit the King.

"Those are signs of the fear the government has of art, and the power of art," she says.

Pope Francis played a key behind the scenes role in the recent warming of diplomatic relations between Washington and Havana. Monday was the pontiff's third
and last full day in Cuba.

He comes to the US on Tuesday.

The pope's stay in Cuba hasn't been without controversy. Two dissidents who tried to attend a papal event at Havana's cathedral were detained by authorities, even though they said they'd been invited by the Vatican.

Asked if critics of Cuba's government were also using the pope for cover, Bruguera decided to "say something maybe some of my dissident friends will not like."

Bruguera, the daughter of Miguel Bruguera, a former Cuban ambassador to Lebanon and Panama, returned to the US in late August, after being under virtual house arrest in Havana for eight months.