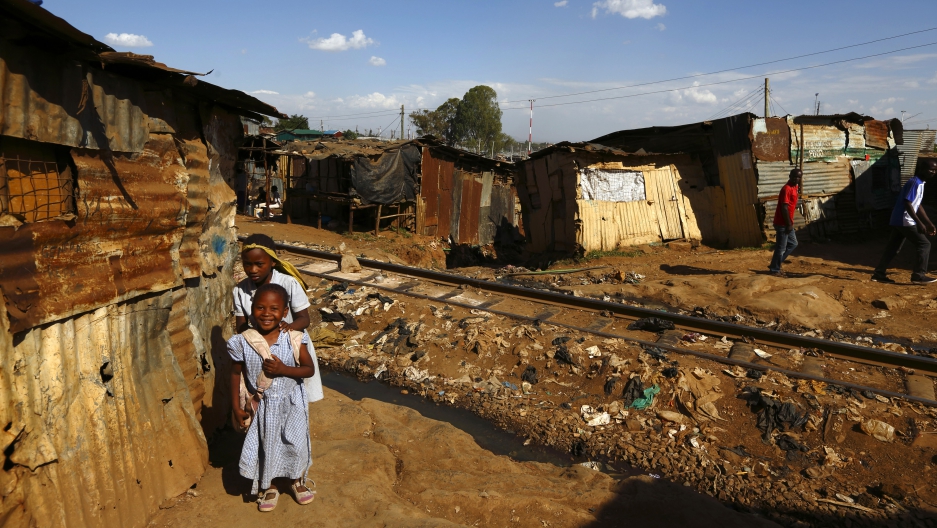 Children stand by an open sewer running alongside a railway track in the Kibera slum of Kenya's capital Nairobi February 26, 2015.

Sub-Saharan Africa suffers from, and often epitomizes, many of the environmental challenges faced by the developing world. Two challenges — safe sanitation and sustainable fuel — are receiving increasing attention, with both included among the Sustainable Development Goals slated for launch by the United Nations later this month.

As the development community works to solve them, the seed of an idea is beginning to sprout that the two could provide solutions to each other.

More than 4.1 billion people around the world lack access to hygienic sanitation, according to research from the Water Institute at the University of North Carolina. The problem is particularly apparent in sub-Saharan Africa, where in many countries more than 50 percent of people lack access to sanitation facilities, according to UNICEF.

The sanitation crisis affects both urban and rural communities, although as population grows, the sanitation statistics for urban areas worsen. The scarcity of physical space, infrastructure and resources in slums exacerbates the problem.

The result is a high death toll, particularly among children. In Kenya alone, the Water and Sanitation Program (part of the World Bank Group’s Water Global Practice) estimates that 19,500 people — including 17,100 children under 5 — die each year from diarrhea, 90 percent of which is caused by bad sanitation.

A separate challenge in sub-Saharan Africa is the reliance on wood and charcoal as a source of household energy. Some 80 percent of households use one or both as their primary fuel supply, according to the Africa Renewable Energy Access Program.

Both sources contribute to deforestation, as charcoal is made from wood, and the smoke and other byproducts of burning them are responsible for a huge number of illnesses. And cooking on wood- or charcoal-fueled open fires — mostly indoors in poorly ventilated spaces —has been blamed for nearly 360,000 child deaths and more than 23,000 deaths of women over 30 each year, according to a 2011 report by the UK-based charity Christian Aid.

While developmental issues such as sanitation and alternative fuel have traditionally been the purview of governmental and non-profit organizations, in Kenya, an increasing number of private-sector players are getting involved, testing innovative solutions that aim to address both the sanitation and fuel challenges at once.

One such company is Sanivation, which, since incorporating in Kenya last year, has been turning human waste into fuel briquettes.

Sanivation installs toilet facilities in Kenyan households for free — focusing mostly on urbanizing communities — and charges KES600 (US$6) per month for waste collection services. To date the company has installed toilets in 55 households, and has piloted its units in the Kakuma refugee camp.

The company mixes the human waste it collects with carbonized agricultural residue to make fuel briquettes, dubbed “MakaaDumu” — Swahili for long-lasting charcoal — which it sells back to local communities to use in place of conventional charcoal. In this way, Sanivation not only provides hygienic toilets and waste collection — reducing the dumping of infectious human waste, which leads to diarrheal diseases — but the resultant fuel also produces less smoke than conventional charcoal when burning, burns longer than charcoal briquettes and reduces the need to cut trees. Foote says every ton of briquettes sold saves approximately 88 trees.

“We’re about so much more than installing toilets,” Foote says. “We’re looking at creating a whole value chain within urbanizing communities.”

The fuel has been tested by the Kenya Industrial Research and Development Institute, and internal research has also been conducted with support from the US Centers for Disease Control and Prevention to test Sanivation’s ability to render human waste safe for reuse.

Sanivation co-founder Andrew Foote says despite the stigma one would expect to be attached to human waste, only around 20 percent of potential customers display an adverse response to the briquettes.

“Overall, I think we are able to combat the stigma by how the fuel performs,” he says. “I think people are overall really receptive to trying new types of fuel, due to the prices of charcoal and the amount it consumes from their monthly income.”

Foote says substantial effort goes into ensuring the briquettes are odorless and packaged to look and feel like a fuel product.

“It doesn’t matter to me that it’s made from treated waste,” says Sanivation briquette user Florence Wanjiru, a resident of the Karagita slum on the shores of Lake Naivasha. “I can’t tell at all.”

“It burns for a long time, so I cook more than one dish. And it fits in my jiko [stove],” says fellow customer Joyce Wangari.

Kenyan company Afrisol Energy has also been active in the dual sanitation-energy space since 2010, and has diversified to include both human and animal waste.

Afrisol installs custom-made biogas digesters that turn waste into methane that can be used as fuel instead of tree-based biomass. The organic waste is mixed with water and fed into the digester, where bacteria turn it into a mixture of gases. After purification to remove unwanted gases, the end product is piped away for use as cooking gas and electricity.

Biogas presents an alternative source of fuel that addresses a number of the problems inherent in charcoal burning: It is smoke- and sootless, it reduces fuel expenses and the rate of deforestation and greenhouse gas emissions, according to Afrisol. The solution also improves sanitation by reducing levels of waste-based pollution.

The company currently focuses on serving larger organizations such as farms and schools, although it does serve some households as well. Afrisol has completed more than 100 customized biogas projects in Kenya to date, and is looking to scale up its rate of installations.

Another company tackling the sanitation challenge in Kenya is Sanergy, which operates in the country’s slums. The company was established in 2010 by a team of students from the MIT Sloan School of Management.

Sanergy uses a three-part process. First, it rolls out a franchise-based network of low-cost sanitation centers — known as Fresh Life Toilets — in slums to micro-entrepreneurs who buy them at cost and run them as profit-making businesses. As of August 2015, Sanergy had implemented a network of 734 Fresh Life Toilets run by 362 Fresh Life operators; all told, the toilets were being used 33,000 times per day.

Second, Sanergy collects the waste from each Fresh Life Toilet and transports it to a central waste processing facility. Since November 2011, the company has collected, removed and treated 6,645 tons of waste.

Finally, Sanergy converts the waste into saleable products such as renewable energy, insect-based animal feed — the waste is fed to insects, which in turn are packaged as animal feed — and organic fertilizer, which it sells to farms. The lack of affordable, organic fertilizers to replenish land is a key issue surrounding the country’s food security.

Sanergy franchise operators make KES85,000 (US$820) per toilet per year. Sanergy itself makes money by selling the waste by-products to farming customers.

“Our model relies on community buy-in to function effectively,” explains Medora Brown, communications manager at Sanergy. “We ensure our Fresh Life operators are well-respected, well-networked members of the community who can teach their friends and neighbors about the importance of good hygiene and improved sanitation.”

While all of these companies are currently active in Kenya, representatives believe their dual solutions to sanitation and fuel crises could readily take root elsewhere. Sanivation has already collaborated with a project in Haiti that installs sanitation systems.

Meanwhile, independent agencies are affirming that private sector players may be well-positioned to achieve progress in combating the dual challenges in a sustainable manner.

“The aid model with its handouts has often been ineffective and not sustainable in the long term,” says Alessandra Moscadelli, head of communications at the nonprofit GVEP International, which works toward alleviating poverty in developing countries through access to sustainable and renewable energy sources. “Besides, freebies don’t work in a sector which requires a degree of technical expertise and maintenance. We believe in a private sector approach to sustainable development, utilizing donor funding to help businesses succeed and grow.”

While the waste conversion approach to the sanitation and fuel challenges being spearheaded by these private companies in Kenya may not provide a blanket solution to achieving the respective Sustainable Development Goals worldwide, the local trials so far have shown these innovations can and are making a difference in communities with few other options.

This story was first published by Ensia, an environmental news magazine produced at the University of Minnesota.