To see boys and girls playing soccer together on a Sunday may not seem like a big deal. But it is: Co-ed sports of any kind are a remarkable sight in India.

And it’s deliberately done here on this playground in Chembur, a lower income neighborhood in Mumbai. And it all goes back to the drive of the remarkable coach of these kids, Parvati Pujari.

I’m visiting Pujari at her family’s small apartment in Virar, a suburb of Mumbai. She’s just returned from training the kids in Chembur and is catching up with her sisters and two nieces while watching TV.

Pujari is college-educated and she was on India’s first national rugby team for women. But none of that was in the cards when she was the fourth girl born to poor, illiterate parents here. They worked as construction workers on daily wages.

“Mummy, Papa, my sisters and I, we’d keep moving from one neighborhood to another. That’s why our parents didn’t enroll us in school,” says Pujari. 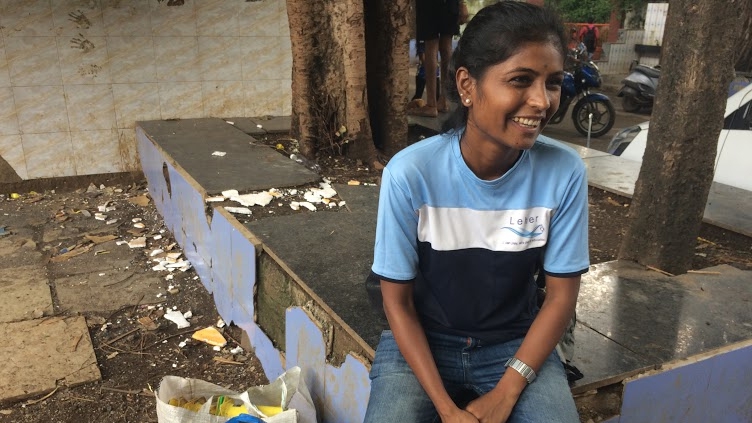 Parvati Pujari in the Mumbai neighborhood Chembur, where she coaches kids every Sunday.

But when she was about 9, she met two kids in her neighborhood, who would walk to school every day. “They’d wear uniforms, looking very neat and clean, very different from the rest of us,” Pujhari recalls. “I saw them and thought, ‘Oh I want to be like them, too.’”

So she convinced them to take her with them. It wasn’t a real school, just one woman teaching a handful of kids in the offices of a non-profit organization. But Pujari was hooked — she loved learning and has never looked back.

She even convinced the teacher to bring the classroom to her neighborhood, so her younger sisters and the kids of other construction workers could also join. The teacher agreed and began teaching them under a tree in Pujari’s neighborhood, she says.

In a year and a half, Pujari made up for all the lost years, and enrolled directly in third grade in a proper school nearby. Her younger sisters also followed in her footsteps and began going to school.

Their parents didn’t object. In fact, Pujari recalls their father even encouraging them. But when she was around 15, they began talking about getting her married.

“All they thought was ‘we have six daughters. The sooner we get them married, the sooner we’re done with our responsibilities,’” she says.

Pujari (third from left) with her sisters (from left), Saraswati, Malamma and Bharta.

Pujari’s three older sisters had all been married off between the ages of 12 and 16, and she was expected to be next. But, she says, one look at her older sisters’ lives and she knew, “I will not get married at this age.”

Like most married women here, her sisters lived with their in-laws and had little say in their own lives. For example, she says one of her sisters only wanted two kids, but her husband’s family pressured her into having four.

That’s not the life Pujari wanted.

“When I don’t like something someone does or says, I tell it to people directly. Doesn’t matter if it’s Papa, or Mummy, or my neighbors, I just tell them directly: ‘I don’t like this. So please don’t ever do this again.’ But if my sisters don’t like anything, they can’t say it,” she says. “They have no voice!”

Pujari could see that an education would give her the ability to make her own decisions — the right to stand on her own two feet and have her own identity.

But her parents didn’t understand, she says. What she sought was so beyond what they thought of as a girl’s role in life: To get married, produce children and look after her husband and his family.

“To explain to them what I wanted to do with an education, what I wanted my life to look like, that was very hard,” Pujari admits.

For two months, in fact, her parents wouldn’t let her go to school, she says. She had to stay home and take care of housework and her sisters, while her parents went to work. Finally she went and talked to her mentors at school.

“They helped me out. They came and spoke to my parents and said, ‘Your daughter wants to study. Why aren’t you letting her go to school?’” she says. 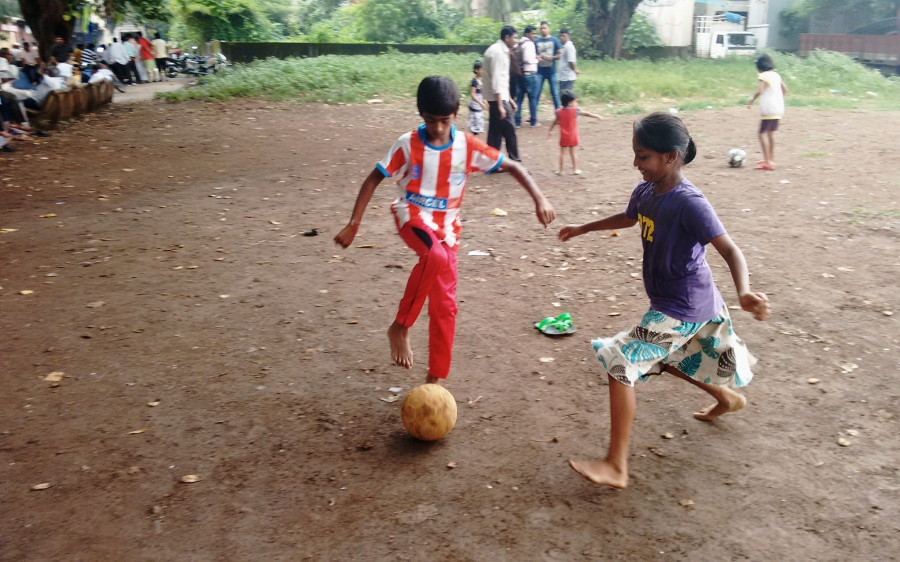 Girls and boys play together on Sundays in Chembur thanks to Pujari's work.

Her parents agreed to send her back, but they had no money to support her education. Pujari won a scholarship from Sunbeam, a local NGO that supports poor children. She graduated high school and enrolled in night classes at a college ,while working at another local organization called Magic Bus. They gave her a stipend, which she used to pay her tuition.

Somewhere along the way, Magic Bus introduced her to sports — track and field, handball and soccer — and she realized she was good at them. In 2009, she began playing rugby at a friend’s suggestion. It was a totally new sport, but she was so good that she was selected for the first national women’s rugby championship, held in Mumbai back in 2009.

She played at the national level, but had to give it up recently because of a knee injury.

She recently started the small NGO Leher to use sports to empower other girls from poor families. And that’s why there are girls and boys out here on the playground playing together. The coaches are all women and the free classes are for both boys and girls. It has a huge impact on the girls, Pujari says.