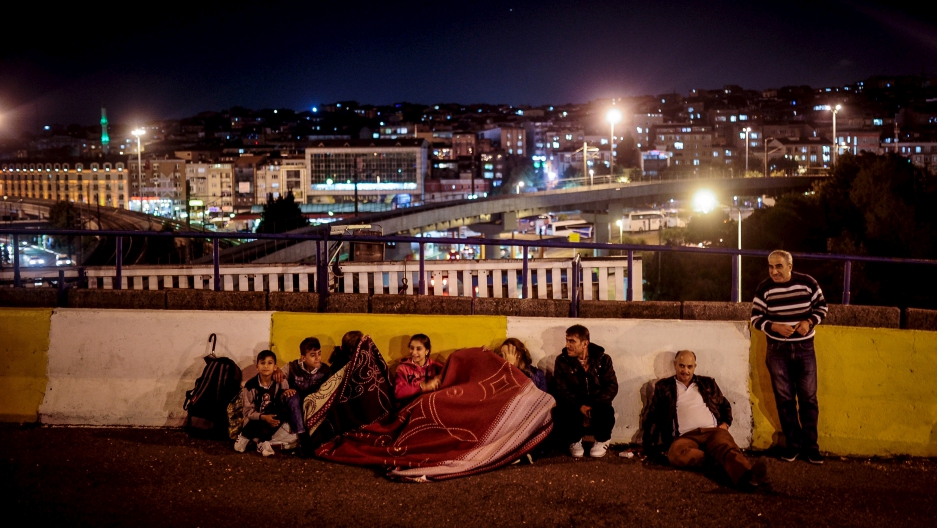 A migrant family spends the night near the main bus station in Istanbul on Sept. 17, 2015.
Credit: Yagiz Karahan/Reuters
Share

Amer Mohammad has a decision to make.

While refugees are camped out, protesting and demanding safe passage from Turkey to Europe, Amer must decide if he will wait and how long he will wait for an answer about his future. The United Nations and the German embassy, he says, have said it could take years for him to get paperwork to move, and there's no guarantee he will actually be allowed to go anywhere — let alone where he wants. In the meantime, he is not allowed to legally work in Turkey.

So he's joined a camp of refugees outside Istanbul's main bus terminal. They have been staging a sit-in for four days and pitched tents in the small green areas around the station. Amer estimates there were about 1,000 people in the camp on the first day; some Turkish media reports say there are now as many as 3,000 people. The refugees, mostly from Syria but also from Iraq, Pakistan and Afghanistan, are looking for a land route to Europe.

Many of them had been traveling by bus to Edirne, on the Greek border. But buses and taxis are refusing to take anyone to the border, and the refugees are effectively trapped. The only other way out is via sea, on a boat from İzmir.

Amer knows that 22 people drowned in the Aegean Sea on Tuesday. He might take the sea route to Europe as well. He feels desperate. Like other refugees, he cannot legally work in Turkey. His fiancée lives in Germany, he says, and he wants to join her there. The camp, he says, is controlled by security and gates. Anyone who leaves is not allowed back in.

"I told my brother, if they don't let us go, we will go to the sea," Amer says. His brother, who is also staying near the bus station, said it's not worth the risk. "I told him that I will do that for my fiancée. If he wants to stay, he can stay."

Amer fled Iraq in July 2014, not long after ISIS took control of the city of Ramadi. He was having tea in a garden with his family when the bombings began, destroying the apartment building in front of the house. "I have a piece of the bomb in my leg," he says. 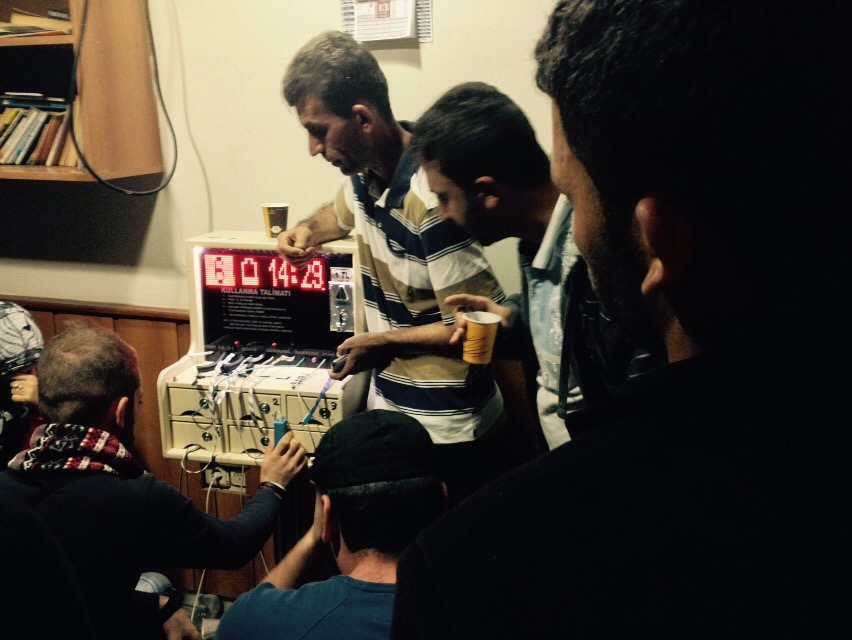 Amer connected with us using his smartphone, but he spends many hours keeping it charged. There is just one charging station for the people who are camping outside Istanbul's main bus station, and Amer says it takes an hour to charge his phone halfway.

Credit: Amer Mohammad
Like many of the refugees in Turkey, Amer gets a lot of his information on his smartphone, from news articles and discussion groups, where he also shares what he is seeing. We connected with him by phone, Facebook and the Internet chat app, Viber. He asked that we not use his surname to keep his family in Iraq safe and to be sure he does not jeopardize his chances of receiving a visa.

After arriving in Ankara, Amer registered with the UN as a refugee. He says they told him it would take until 2020 for his family to get an appointment to even be considered to be able to leave Turkey. He traveled first with his parents and two of his brothers. Two of his sisters and their families joined later. They were placed in Samsun, over 400 miles from Istanbul on the northern coast. But Amer wanted to get to Germany, so he and his brother struck out for Europe.

Another sister remains in Iraq with elderly relatives in Haditha, which has been an ISIS battleground since July.

The UN Refugee Agency says there are almost 2 million refugees from Syria in Turkey, almost half of the total number of refugees they are tracking in the region. Tens of thousands more are, like Amer, from other countries such as Iraq, Iran or Pakistan.

Another option for Amer is to wait for his appointment next April to apply for a German visa. He will need a long paper trail to show his relationship with his fiancée and his personal history, but getting the correct documents is very difficult when the offices in the city where he lived in Iraq are no longer functional. He doesn't think he can wait for an uncertain outcome. He is 25 and wants to have a life. In Iraq, before ISIS took control in the west, he got a college degree in chemistry and he and his family had good jobs.

"Because of this war, we don't have jobs. We don't have resources, you know," he says. In Turkey, he's tried to take grueling construction jobs to make money under the table, but the conditions are poor and, without permission to work, refugees are often shortchanged by employers. He hesitates to talk about his future.

"Really, I don't know what to do. I like computers very much. I like chemistry and medicine," Amer says.

But to start, he just wants to be with his fiancée. They met while in school in Iraq in 2010, then she went to Germany to study. She still has one year of her education to go. She and Amer have been trying to be together for a long time, he says.

They've talked about going elsewhere, but Amer says that when he sees the comments on news stories online, he thinks that Arabs are not welcome in many countries. "Ninety percent of the comments — they hate us. They think we are terrorists. Or we are coming to steal jobs from them," he says. 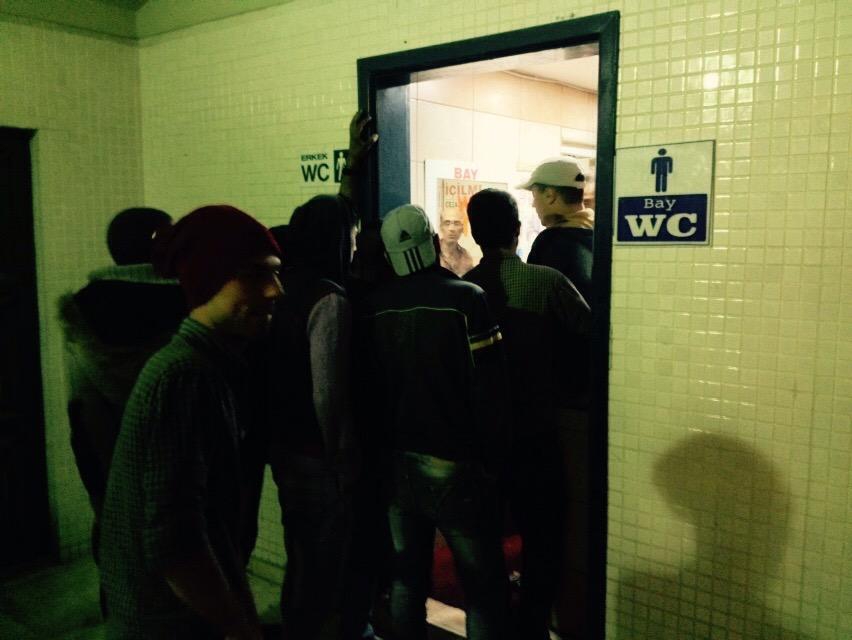 The restroom facilities that refugees can access are pay-to-enter and there aren't enough to accommodate everyone. "If I want to go to WC [toilet], I have to wait two hours," says Amer.
Credit:

Near the bus station, refugees rely on a mosque to charge their cell phones and have meals when they can. But there isn't enough food and water for everyone, Amer says. Authorities, he says, will not allow any deliveries into the camp, but many refugees do not want to disperse until they have a way to get to Greece. The Turkish Red Crescent said by email that it has distributed 3,000 units of water, 700 blankets as well as food to a camp that has sprung up in Edirne.

The governor of Edirne province said on Thursday that if the refugees there do not disperse within three days, they would like to send them to their home countries or to refugee camps in Turkey. For Amer this is not an option. Refugee camps, he says, are terrible places. Especially for families.

"We will not be in a camp. We can't be in a camp. We will not let them," he says. Amer says someone approached him about swimming to a Greek island; he thought about it and researched, but decided it would be too risky. But he still thinks that he might board a boat, and leave his family in Turkey. If he can find someone trustworthy to help him go.

"I know it's dangerous. I don't have many things to lose. Maybe my family will lose me. I know that maybe I will not arrive. I will not make it."

Amer keeps a flash drive in his pocket. He likes computers and graphic design. But this particular hardware has a much more macabre purpose: It holds all of his identifying information and letters to his family and friends in case his journey kills him.

"It's a message to the person who found my body. I don't know, I'm crazy."

Winter is coming, which will make sea travel impossible soon. For the forseeable future, he says he will stay with the other refugees in Istanbul, "whatever the end, good or bad."

"I don't know what to do. Really. Even my enemy, I don't hope for him to be in my position."

What happens next for Amer?

Despite the risks, a refugee from Iraq has decided to try to leave Turkey — by jet ski 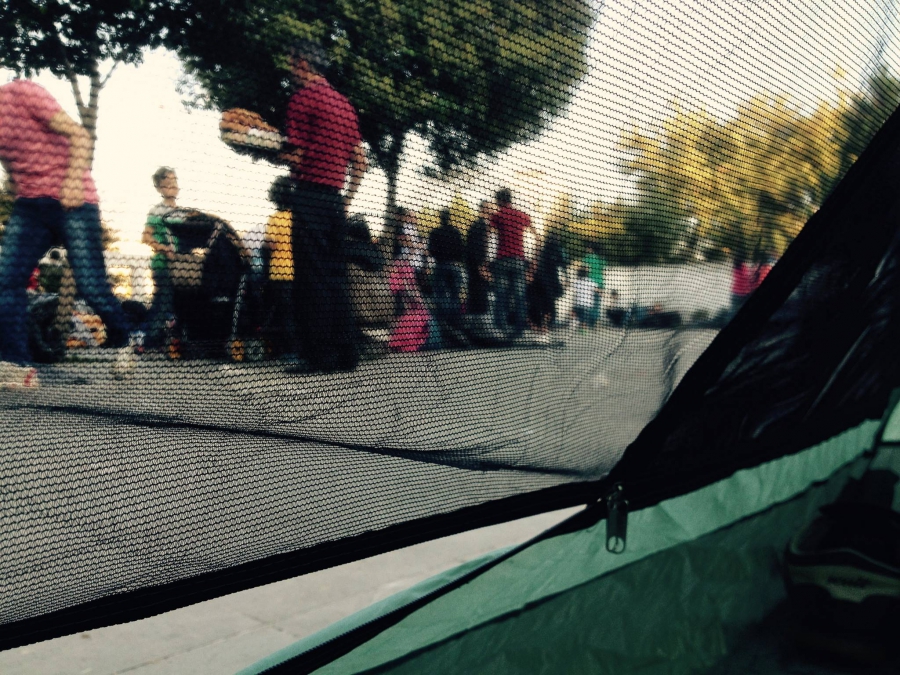 This is the view from Amer's tent. He is camping outside Istanbul's main bus station with other refugees. They are asking for a safe route to travel to Europe.