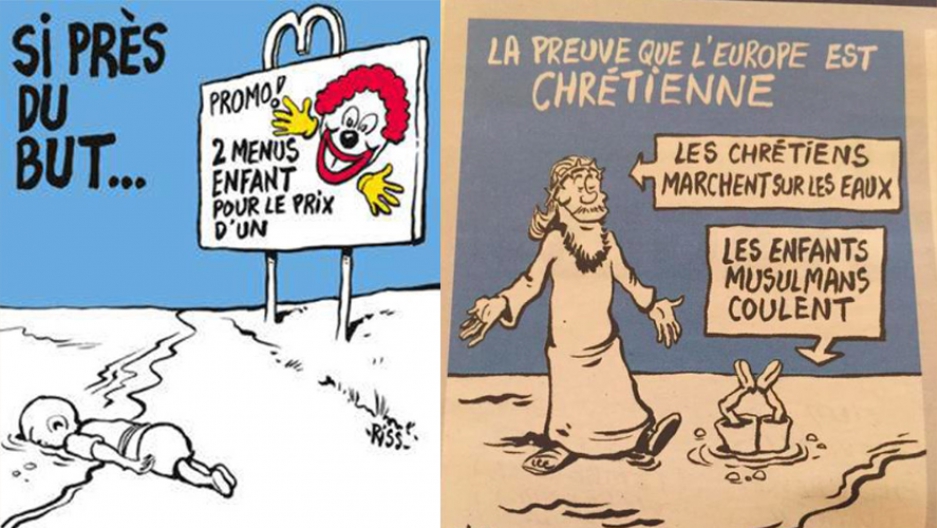 Two of the rejected covers that French magazine the Charlie Hebdo instead placed at the back of the issue.

Increasingly, images seem to be driving the story of the migrant crisis, and the world's response to it.

Earlier this month it was the photo of a lifeless Syrian toddler named Alan Kurdi. Now, it's cartoons published by Charlie Hebdo, the satirical French magazine, which are riffing on that heartbreaking image.

And while many in France interpret the cartoons not as mocking the boy at all and instead part of their tradition of satire, many people on social media have been offended by the cartoons.

When 'satire' is used to attack the powerless, it's nothing but a pointless attention-seeking jab. #CharlieHebdo

Both of the cartoons were rejected for the cover of the latest Charlie Hebdo, but the magazine instead included them on the back of the edition. The rejected cartoon on the left shows Jesus walking on water next to the Syrian boy drowning. Robert Mackey, who writes the Open Source column for The New York Times, says it’s mocking the idea that Europe is concerned about Muslim integration because of its Christian identity, as the Hungarian prime minister said recently.

The headline suggests that Europe is Christian and it points at the figure of Jesus saying that Christians can walk on water. Then the arrow points at the Muslim boy and says Muslim children sink.

The other rejected cartoon that Charlie Hebdo, instead of putting on its cover put in the back of the issue, depicts Kurdi and then next to him there was a kind of cheery advertisement of McDonald’s happy meals and the caption said, "so close to the goal."

What a stupid way to try to be funny #shame pic.twitter.com/fO7O68JcZF

"These were actually just two of the many cartoons that used this image in different ways," Mackey says. "Some of them I think would have been more clearly referencing the French response to the crisis which was part of what the cartoonist said they were doing. Political satire needs to be translated, not just the language or the words of the joke, but there’s all these specific cultural references that we’re not familiar with."

Mackey offered that it would be similarly difficult for people in China or India to completely understand what Stephen Colbert’s parody of right wing American pundits was about.

Interestingly, the image of Kurdi has been the dominant subject for political cartoonists since the original photo was made public. Cartoonists have not spared him in their commentary, but somehow it’s the Charlie Hebdo treatment that energized people and got them mad.

"This also comes off the attack on Charlie Hebdo and the response to that in January," Mackey says. "Many of the comments from the people that were outraged saying ‘is this why we’re supposed to all say 'Je suis Charlie'' or showing solidarity to these people and then they are using their power to mock the powerless. That’s not obviously how the cartoons themselves feel but that’s definitely the way they’ve been received particularly outside of France."

Mackey has been looking at French coverage of the cartoons from Charlie Hebdo and notes that people in France haven't interpret them as being offensive and instead seem to think that their sense of humor and their tradition of satire just doesn’t translate well in the US and the United Kingdom.

"The thing that gets a little confusing is that in some ways, satire — when it’s really biting — isn’t really funny," Makey says. "It kind of plays on something of the same instinct and the same way of communicating. But lots of things, like the famous editorial cartoons about the Nazis or about the genocide in Sudan, they are biting but they are not actually intended to make you laugh."

Appalled by Nate Beeler's going out of his way to mock the victims of the Sudanese genocide. #charliehebdo pic.twitter.com/c05mBLENCa

But perhaps it's the photo itself that is something so primal in terms of the reaction it evokes. There is something breathtaking when you saw this picture. And it might be that this image somehow has galvanized people around what's going on in Syria and the refugee flow more than four years of global news coverage.

"To some extent it has," Mackey says. "It introduces somewhat of the normality of the people effected by this. I think people have an idea that what’s happening in the Middle East is exotic and foreign and different to their experiences. And people saw this little boy ... could have blended in anywhere in Europe or the United States."

The photo of Kurdi reminded Mackey to some extent of the horrible and very harrowing images of Neda Agha-Soltan — the Iranian protester who was killed in 2009 right in front of two camera phones. And perhaps in our modern Internet age profuse with imagery, more so than ever it's visual images that convey what’s really going on.