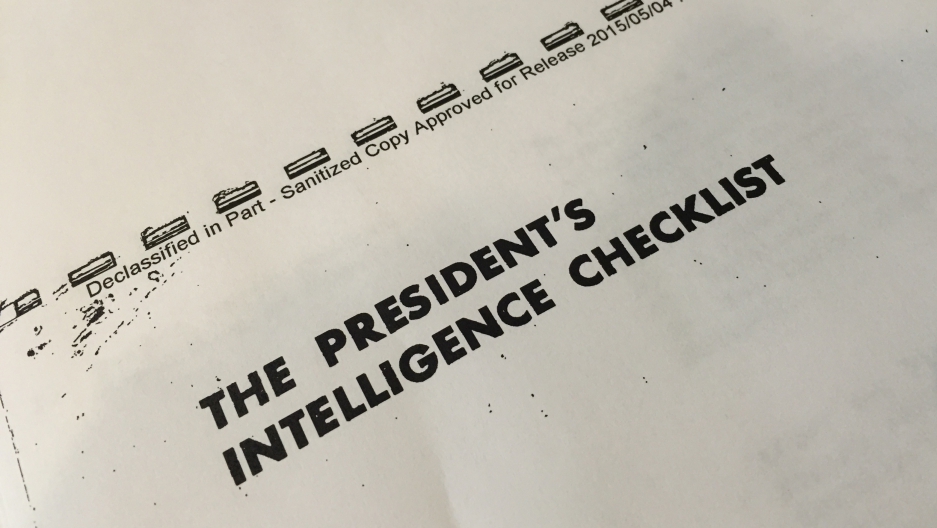 Every day, the president gets what's called a Daily Brief from the CIA. The brief is a short summary of all the most important things going on in the world, including the top secret stuff the CIA is involved in.

The Daily Brief is a tradition that goes back to John F. Kennedy. The briefs given to Kennedy — and to Lyndon B. Johnson — were recently declassified and published on Wednesday.

They're full of fascinating stuff, including details of the Cuban missile crisis and the Vietnam War, and countless lesser events.

For example, on October 30, 1962 — at the height of the missile crisis — the agency reported that the latest aerial surveillance photos, taken the day before, were inconclusive. They could not confirm the Russian claim to have started withdrawing their missiles. In other words, we’re looking at the latest, real-time intelligence hitting the president’s desk at the time.

Kennedy ordered the CIA to start the brief in the aftermath of the Bay of Pigs crisis, in which Kennedy felt he was not getting a coordinated, consistent briefing. The Agency’s Office of Current Intelligence leapt at the chance to distill their best information into what was initially known as the President’s Intelligence Checklist, or PICL. The office became known as the pickle factory.

The brief consisted of two or three sentences on all the top issues of the day. Kennedy wanted it short enough that he could fold it up, and put it in his top pocket.

The first brief was delivered on June 17, 1961, while the president was at his Blue Ridge mountain retreat. Kennedy was by the pool and sat on the diving board to read the first PICL. Its first item was about a special meeting of the Soviet Communist Party Central Committee, and what the agency understood to be on the agenda.

About 20 percent of the documents are redacted. Even in that first brief, items on Japan and Brazil are entirely blanked out.

President Barack Obama ordered all the briefs to be released in 2009, as soon as they’re 25 years old. The agency has taken this long to process, scan and publish the documents. They hope to release the briefs prepared for Nixon and Ford next year.