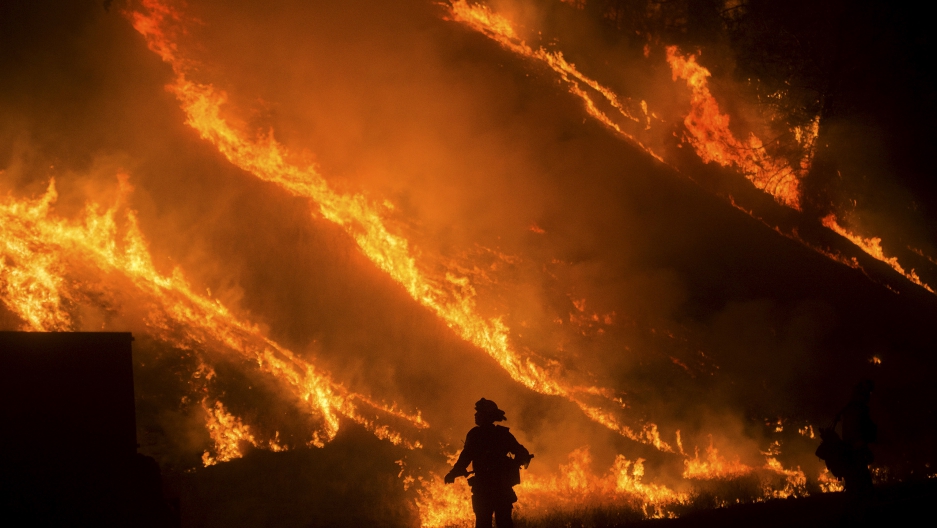 Flames from a backfire on Highway 29 rise above a firefighter battling the Valley Fire in Lower Lake, California, September 13, 2015. The swiftly spreading wildfire destroyed hundreds of homes and forced thousands of residents to flee as it roared unchecked.

Courtney Duncan's husband is a fire fighter. So when she found herself surrounded by California's latest wildfire over the weekend, she placed a frantic call to him, a battalion chief with the California Department of Forestry and Fire Protection.

Paul Duncan had to face one of his greatest challenges: Using a cell phone to direct his family to safety as a fire engulfed their neighborhood.

Over the weekend, CalFire called on Duncan to fight the fire in his Hidden Valley, California, community. An extreme drought is fueling one of the worst California fire seasons in recent memory — some 700,000 acres have burned so far and about 23,000 Californians have been displaced from their homes.

While on the job, Duncan learned that his own home had become the frontline of the blaze. His wife, his son and two teen daughters were forced to flee in three vehicles packed with a handful of items they grabbed from their home. 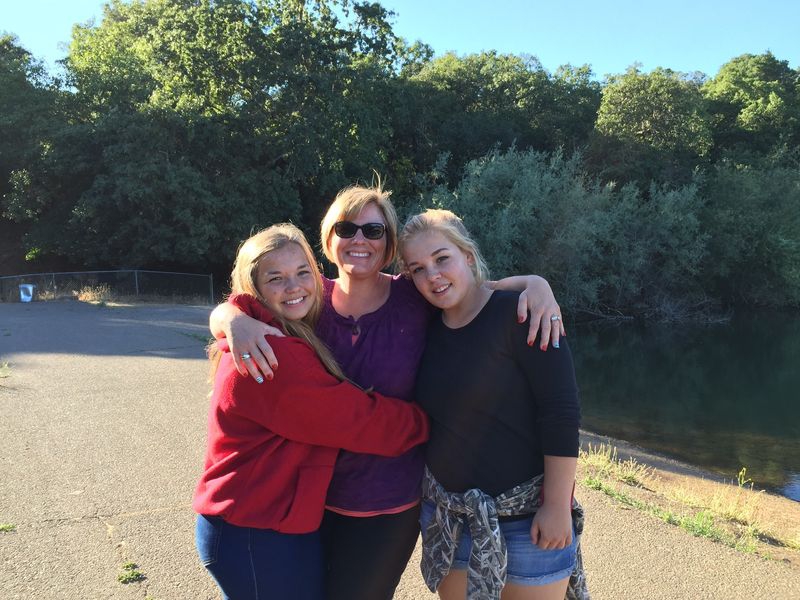 His family had to separate along the way, and his young daughters were forced to face the terror of flames alone.

“[I told them] you need to drive all the way through the fire — just step on the gas, look straight ahead, don’t pay attention to what’s going on around you, focus on driving, and get out of there,” Duncan says. “They did. My 17-year-old did a spectacular job of getting her 15-year-old sister, who was in the truck with her, both hysterically crying. She was able to pull it together and find the fortitude to drive through the inferno.”

While his daughters drove, Duncan’s son stopped with his wife to help rescue a neighbor’s dogs.

“My son made forcible entry into the house. They were able to chase the dog down, corral it, get it loaded in the car, and then my son took off,” says Duncan. “He was the last one to make it north. The road was closed with fire, burning vehicles and traffic accidents.”

“My wife couldn’t get out the way that the kids got out — she actually had to ram a fire gate that was closed in front of her with her car,” he says. “She made it out to the main access road and saw that it was blocked.”

Duncan says Courtney couldn’t make contact with their children, so she decided to head south.

He placed his faith in his wife and hung up the phone — in front of him, homes were burning to the ground.

Though he didn’t know for sure, Duncan says his 30 years of experience as a firefighter helped him help his family — a task much easier than waiting to find out if they were indeed able to find safety.

“It was trying,” he says. “I just kept looking at the Find My iPhone App because I have all of the kids and my wife on that. I was just trying to find them and see where they made it. It was an unbelievable relief when I was able to find out that they had made it into Lower Lake, which I knew was on the other side of the fire.”

His family ultimately reunited, and after they made it to safety, they got a piece of devastating news.

“I didn’t realize our house was lost until the next morning when I received a call from one of my chiefs at CalFire who let me know our house burnt all the way to the ground,” Duncan says. “It’s a huge loss to know that everything you’ve worked for the last 40 years, that there’s nothing left — it’s just a heap. When I was able to get to the house the next day and look at the utter devastation, I realized that other folks were in the same situation and that I had what was most important to me: My family.”

This story first aired as an interview with PRI's The Takeaway, a public radio program that invites you to be part of the American conversation.