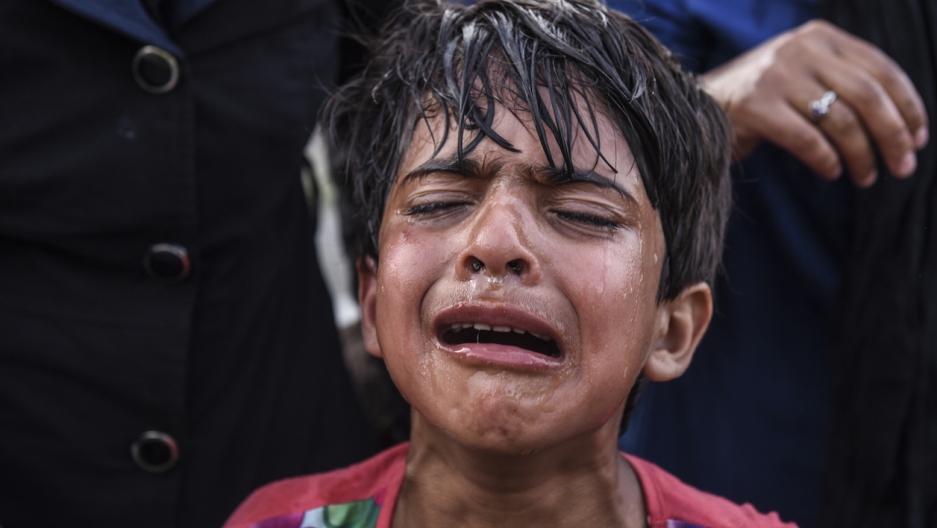 A child cries from the tear gas Hungarian anti-riot police used to disperse migrants and refugees who tried to cross the Hungarian border with Serbia on Sept. 16, 2015.
Credit: ARMEND NIMANI
Share

Slovenia intends to reinforce its border with Croatia ahead of a possible influx of migrants seeking a new route into Europe's borderless Schengen area, the country's police chief said Wednesday.

"The border with Croatia is... a Schengen external border and, for that reason, under strong police control," Police Commissioner Marjan Fank said.

"For the moment, we haven't reinforced our units but now, with the changing situation, we will certainly need to concentrate our units at the expected border crossings to speed up the procedures with migrants," he added.

His comments came after Croatian Prime Minister Zoran Milanovic said his country would allow the free passage of migrants across its territory.

Migrants have begun carving a new route into the Schengen area, traveling via Croatia, after neighboring Hungary, overwhelmed by the refugee traffic, fenced off its own border with Serbia.

Fank also confirmed that Slovenian police had brought in reserve police officers to man the area close to its border with Hungary.

"The main reason for reinstating the border control is Hungary's decision to additionally toughen its border regime with Serbia," Fank explained.

"That means several tens of thousands of refugees in Hungary will be looking for a way out."

Hungary, which has received some 175,000 migrants this year — the vast majority just passing through — has erected a razor-wire barrier along its border with Serbia and begun erecting a fence four meters (13 feet) high.

The International Organization for Migration said last week that over 430,000 migrants and refugees had crossed the Mediterranean into Europe so far this year, with 2,748 dying or going missing en route.

Germany has taken the lion's share, admitting 450,000 refugees so far this year, many of them fleeing violence in the Middle East, especially Syria.