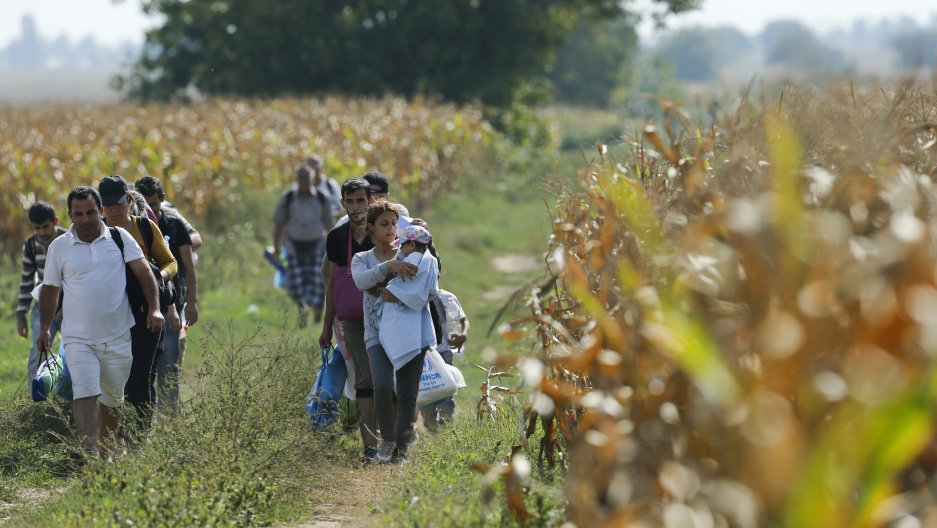 Migrants walking through cornfields near Sid in Serbia, trying to reach Croatia.

The tide of migrants and refugees trying to reach western Europe has run into a breakwater.

Hungary has decided to close its borders and drive migrants away, by force if necessary. Hungarian police used water cannons on Wednesday to disperse one large group on the border with Serbia.

So, now, many of those stuck in Serbia are looking for another route. They’re turning west, toward Croatia.

“The actual formal border crossing itself is quite quiet,” says the BBC’s Guy Delauney in the small Serbian border town of Sid. “But what’s happening is that taxis and buses are dropping refugees off a short way from the official border crossing, at the edge of a cornfield. And the drivers are then just directing people through this cornfield, where people have been walking along tracks to the Croatian border.”

“I accompanied one group of several dozen people along this way,” says Delauney. “And as they walked towards Croatia, a group of Croatian police vehicles appeared. And without any protest or struggle, everybody in this group of refugees just got in those vans.”

“They seemed in extremely good spirits,” added Delauney. “They were feeling very optimistic about entering the European Union. They were filming themselves, taking selfies. ... And I asked the people filming themselves about this and they said, yup, we’re going to send those back to our families in Syria, so they know what’s going on.”