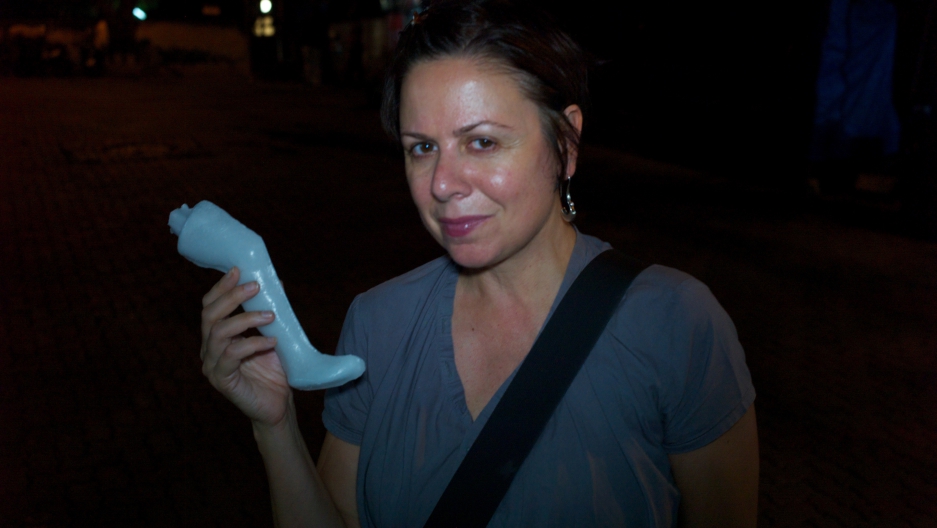 Andrea Crossan holds a wax figure at the Bandra Fair in Mumbai.

As the Across Women's Lives team travels the chaotic streets of Mumbai this week, meeting inspirational women and reporting on their feats of feminism, we'd like to give you a peek into the reporting process like never before.

All month we will feature a curated social media digest from the whole team, as well as dispatches from different #HerRights journalists on the ground. Today we hear from Andrea Crossan, field producer of the Her Rights series.

Day 4. Meeting with women and men sharing stories of why they are working to stop domestic violence in one of the largest slums in the world. #womenslives #herrights

On #India TV "smoking injurious to your health" crawler comes on whenever someone lights up on screen. Even Chow's monkey in Hangover 2.

This guy passed us twice in traffic yesterday pushing his cart of apples. That's how fast traffic moves in Mumbai. It was like the opening scene from Office Space.

On my flight last week to Mumbai, the man next to me asked me what I was planning to do when I landed. I told him about how I was coming to India as a field producer for a team of journalists reporting on women’s rights in a series called #HerRights. He told me that I was lucky — that my trip coincided with the Ganesh festival. He told me that there would be massive celebrations and that even though I’m not Hindu, I’d enjoy the festivities.

What I didn’t know, was that the neighborhood where I’m staying is more like Vatican City. My hotel is in a suburb of Mumbai called Bandra. And to my surprise, there is a large Catholic community here.

Bandra became the possession of Portugal in 1534. And in 1640, the Portuguese built a large Catholic Church at the top of a hill overlooking the Arabian Sea.

Okay, that's far as I go with the history lesson. Suffice to say it’s no longer part of Portugal — but it’s still a Catholic neighborhood.

This week is a celebration called the Bandra Fair. It takes place the Sunday following September 8, the day Catholics believe to be the birthday of the Virgin Mary.

What this means is that all the roads in and out of the area are closed and vendors set up stalls around the streets near the Basilica of Our Lady of the Mount.

On one of my first evenings here, host Marco Werman and I took a walk up the hill and wandered through the fair. One of the most curious things we found was that the stalls were filled with what looked like hollow wax statues.

Some of these wax molds looked like little white dolls — but others were just body parts. There were arms, legs, heads and even specific organs like the heart or a kidney.

I found out from one of the vendors that pilgrims buy the wax objects as offerings.

The body part or organ you bring to the Virgin Mary represents what you’d like most to be healed by prayer.

This is where it gets a bit odd. There were wax molds of fancy houses, sports cars, ponies and even fake wads of cash.

One stall had wax molds of passports. I was told that it’s to pray for an expedited passport.

I’m not a Catholic so it’s hard to grasp how a thin, white piece of candle wax given at an alter could get a passport office worker to move a little faster.

But here’s the thing — the wax offerings in the stalls cost about 40 rupees. That’s less than a dollar. And I’ve had a bit of dodgy ankle for a few months. So yes, I spent my 40 rupees on a wax leg offering and followed the other pilgrims up the steps to give it to Mary.

After I handed my wax leg over to the volunteers collecting the offerings, I headed back down the hill to my hotel.

This was not the type of religious ritual that I thought I’d witness in India, but that’s just fine. I’ll have a chance to go to the Ganesh festival later this week. It’s a huge street festival so there will be hours of standing. But maybe my ankle will be feeling better by then.