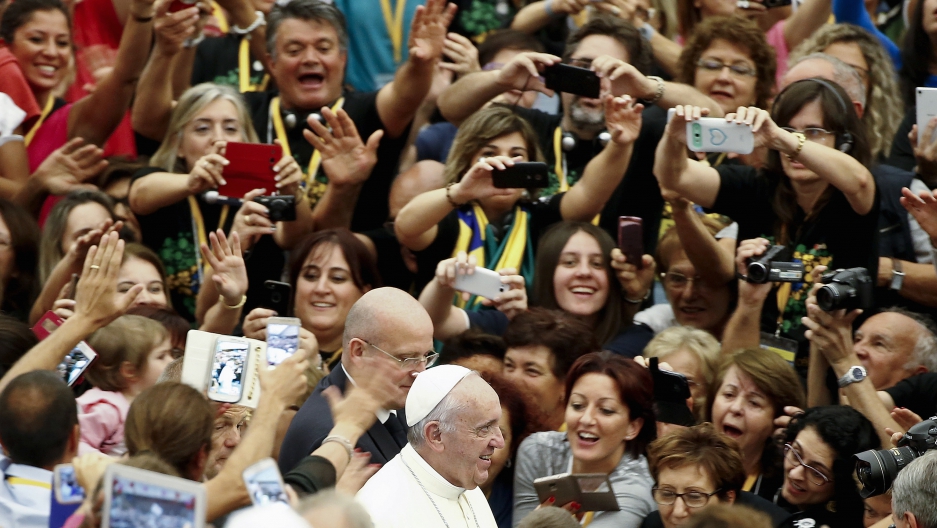 Francis greets the crowd outside of the Vatican in Rome on September 5, 2015.

There's something about this pope. Everybody seems to be head over heels for Francis.

Pope Francis has never set foot in the United States. He’s been polishing up on his English, but most of his public comments during his upcoming US visit will be in Spanish, his native language.

Catholics make up about 20 percent of the US population and they are clearly jazzed about Francis coming, which is hardly surprising. After all, the pope is their representative of Jesus Christ on earth.

But plenty of people from other faith traditions are singing the praises of Francis. And that goes for non-believers too.

“Some of Pope Francis’s actions are really praiseworthy,” says Greg Epstein, who works as the humanist chaplain at Harvard University. Epstein is an atheist.

Francis’s message is compelling, Esptein says, because it’s about humility and concern for the most marginalized and impoverished in society. Epstein says the pope also walks the walk by, “setting good examples for his followers and even in some cases for those of us who are not Catholic and who would never subscribe to a Catholic dogma.”

Some of this is about style rather than substance. Francis is a grandmaster of messaging. Religion writer Michael O’Loughlin has annointed him, “The Tweetable Pope.”

Soon after he was elected pope in 2013, he visited a prison in Rome during the Christian holy week. In front of the cameras, Francis knelt down to wash — and then kiss — the feet of several inmates.

Catholic priests would not normally include women in this type of ritual. But Francis would. One of the inmates whose feet he washed was a Muslim woman from Serbia.

“Washing your feet means I’m at your service,” the head of the Catholic Church told those in attendance at the prison.

It is the kind of scene we have now come to expect from Pope Francis. But it also comes off as powerful stuff to a lot of people outside the Catholic faith.

“I’m a Muslim, but the things he says are resonant for me,” says Rep. Keith Ellison, the Democratic Congressman from Minneapolis. “[Francis is] focusing on what I believe are core values that connect faiths. He has talked passionately about economic inequality, the need for a shared economy, ... social justice and climate change.”

“I’m excited about him,” Ellison adds.

There is plenty of historical animosity between Catholics and Muslims. As recently as 2006, Pope Benedict — Francis’s immediate predecessor — delivered a speech in Germany and made comments about the Prophet Muhammad attributed to a 14th century Byzantine emperor. Muslims in several countries took immediate offense to Benedict’s words and riots broke out. In the aftermath, there were attacks on churches and a few Christians killed.

At the time of the controversy, Francis was the archbishop of Buenos Aires, Cardinal Jorge Mario Bergoglio. From Argentina, Bergoglio responded to the crisis by publicly criticizing Benedict’s comments for damaging Catholic-Muslim relations. The Vatican was not happy. But the man who would later become Pope Francis boosted his credibility as a Catholic leader who took interfaith politics seriously.

After he took over as the head of state at the Vatican, Francis moved quickly to improve ties with Muslims, says Reza Aslan, a scholar of religious studies and author of Zealot: The Life and Times of Jesus of Nazareth.

“For the first time in history, Pope Francis allowed for the reading of Islamic prayers in the Quran from the Vatican itself,” Aslan says. “He is in many ways a breath of fresh air.”

Aslan says one reason why Francis has so much appeal beyond the ranks of the Catholic faithful has to do with his background as a Jesuit priest.

“The Jesuits take very seriously the concept of Jesus’s preferential option for the poor, that the very message of the Gospels is meant primarily for the poor, for the weak, the dispossessed, the marginalized,” says Aslan, who is Muslim but he thanks his own Jesuit education for sparking his interest in the study of religion.

Aslan points out that Pope Francis also got the attention of Muslims and others around the world when took a stand on one particular political issue. “Under his papacy, the Vatican for the first time acknowledged Palestine ... as a sovereign state,” he says.

Recognizing Palestine as a state was not something that most American Jewish leaders were going to celebrate.

Recognizing the State of Palestine was something that most leaders in the American Jewish community were not happy about. But long before going to Rome, Pope Francis had won over many Jewish leaders.

“This is a pope who gets the Jewish inside perspective. He understands how Jews experience their history,” says Rabbi Noam Marans, director of interfaith outreach at the American Jewish Committee.

One of Francis’s first state visits as pope was to Israel, says Marans. And he adds that Francis has spoken movingly about the Holocaust and repeatedly about Jewish survival. The pope also reminds his fellow Christians that Jesus and his followers were Jews and that Christian anti-Semitism is in fact a form of self-denial.

Rabbi Marans met Francis in person at the Vatican and he later described it as a religious experience.

“When you meet him, he is greeting you while he greets a long receiving line of guests and [with] each encounter, he has eyes locked. He’s warm. It is a special experience,” Marans says.

The real revolution in Catholic-Jewish relations came in 1965, when the Vatican officially denounced anti-Semitism and repudiated the centuries-old charge that Jews were guilty of killing Jesus Christ. But Marans says Francis is still a historic pope in terms of his outreach.

“That doesn’t mean that we love every single thing, but it’s a different sense of how he relates to the Jewish community in a very natural way,” Marans says. “We should never take such an achievement for granted. There were two millennia of enmity and animosity, of ideological hatred, from Christianity at the highest levels toward Jews and Judaism that led to violence.”

The Pew Research Center finds that Americans in general like Pope Francis and they like him a lot. About 70 percent of respondents in one poll had a favorable view of Francis.

The group that gave him the highest unfavorable rating — 22 percent — in the Pew poll was white evangelical Protestants. But at the same time, Francis seems to have impressed many American evangelicals too.

“Obviously, he does have a lot of institutional power,” says Katelyn Beaty, managing editor of the evangelical magazine, Christianity Today. “But the way he has chose to embody that kind of power is, in an interesting way, humble. And I think there’s something really attractive about that.”

Beaty says many evangelicals see Francis as a natural ally in difficult times.

“Evangelicals realize that they don’t have the best reputation in western culture, that we’ve kind of become known for what we’re against, rather than what we’re for. And I think Pope Francis leads with the right foot.”

Beaty says Francis’s style has helped him present a message for all kinds of people, not just Christians. Of course, the Reformation did happen. There remains a serious theological divide between American Catholics and Protestants. And one papal visit will not be able to fix that. Something is up, however, when Christianity Today puts the head of the Catholic Church on its cover, which happened late last year.

Epstein, the atheist at Harvard, says he is hesitant to publicly criticize Pope Francis. But Epstein says he refuses to lionize a world leader with beliefs that are so out of step with a large chunk of the American public.

“Pope Francis is still out there advocating for a view of human sexuality that is really damaging to a lot of people. He’s giving temporary, partial absolution to some women who’ve had abortions this year. It’s a good step, but it’s not a solution,” Espstein says.

Esptein hopes people will be open to what Pope Francis has to say on his trip to the US, but also that they listen with a critical ear. What seems pretty clear already is that lots of Americans will be listening more closely to this pope than ever.