María María Acha-Kutscher is a Peruvian illustrator based in Spain who focuses on taking the oft-overlooked women who protest and organize for social change out of the shadows and into the history books.

"Historically, it's important to show that political actions and social changes were always made by women and men together," she says. "Women were always there but weren't always visible."

Her 'Indignadas' (Outraged Women) series is a visual record of women who participate in public protests around the world. Acha-Kutscher takes photographs from the press and "witnesses" them into colorful illustrations that she then prints onto tarps and hangs in public spaces.

Isis Madrid: Tell me about yourself. How did you become the artist that you are today?

María María Acha-Kutscher: I am a feminist visual artist. I am 47. I was born in Lima, Peru, to a family of German origin, and further back I have Chinese and African roots, too. That means I have a multicultural identity, and that's pushed me to have a global worldview. I've never felt rooted to a place. I always feel that I belong to many places. I inherited cultural capital from my father, a filmmaker and photographer, my grandfather, an art theorist, and my great-grandfather, a theater theorist. 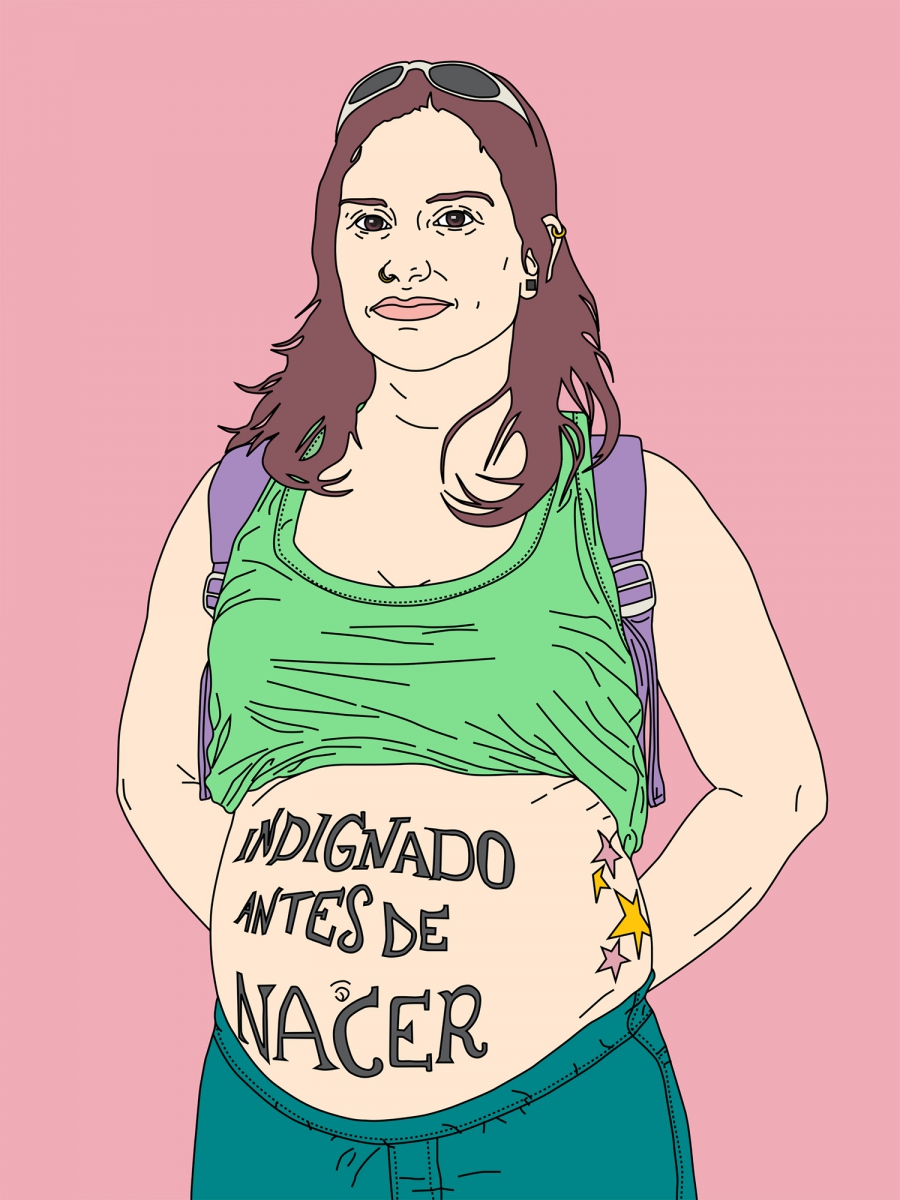 I studied arts in Lima. I lived in Mexico City for 10 years working as an art director for advertising agencies. Then I moved to Madrid in 2001, where I started to develop my artistic work. I co-direct the experimental art project Antimuseo with my partner, writer and artist Tomás Ruiz-Rivas. I work globally.

Since I started working as an artist, I wanted to work on a topic of common interest — the female condition. The experience of being female is shared by women and crosses race, origin, social class, and sexual preference.

I consider myself a feminist artist, because the political dimension of my artwork plays a dual role — it is an artistic product in itself and also an instrument that contributes to political transformations, especially for women.

MMA-C: The first Indignadas piece I made was based on a photograph from the anti-austerity movement 15M in Spain. It shows a pregnant woman with an inscription on her belly: “Outraged since before birth." This image symbolizes the future, a new generation of hope for a better world. At the same time it symbolizes an empowered generation who are not afraid to say what they think.

Indignadas is the third installment of Women Working for Women, a public art project that recovers women's history through digital drawings, inspired by the aesthetics of pop art, comics and the political posters of the 70s.

I started Indignadas in 2012 as an attempt to bring attention to the women of 15M, the movement that took to the streets of Madrid in protest of economic austerity measures imposed by the Troika and the prevailing corruption in the political system in Spain. Now, the second stage includes women from around the world — in order to record our shared history. 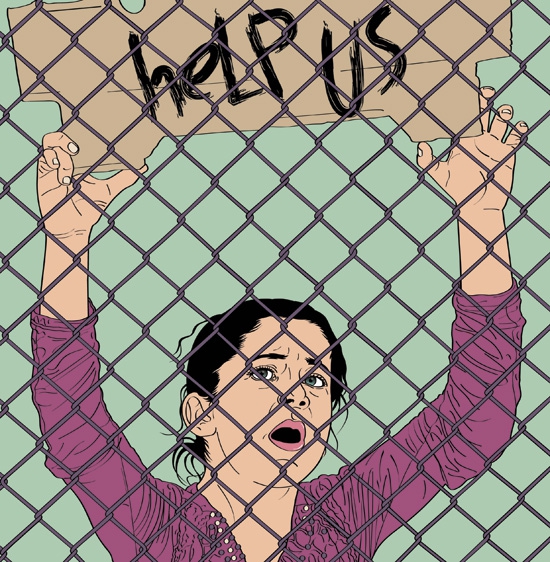 IM: Why the focus on female activists in particular?

MMA-C: The main focus of my work is woman. Her story, the struggles for emancipation and equality, and the cultural construction of femininity. Indignadas is part of this work.

These images show women in political action and also the female body as a support for the political message. By transforming photographs into drawings, I immortalize these actions. 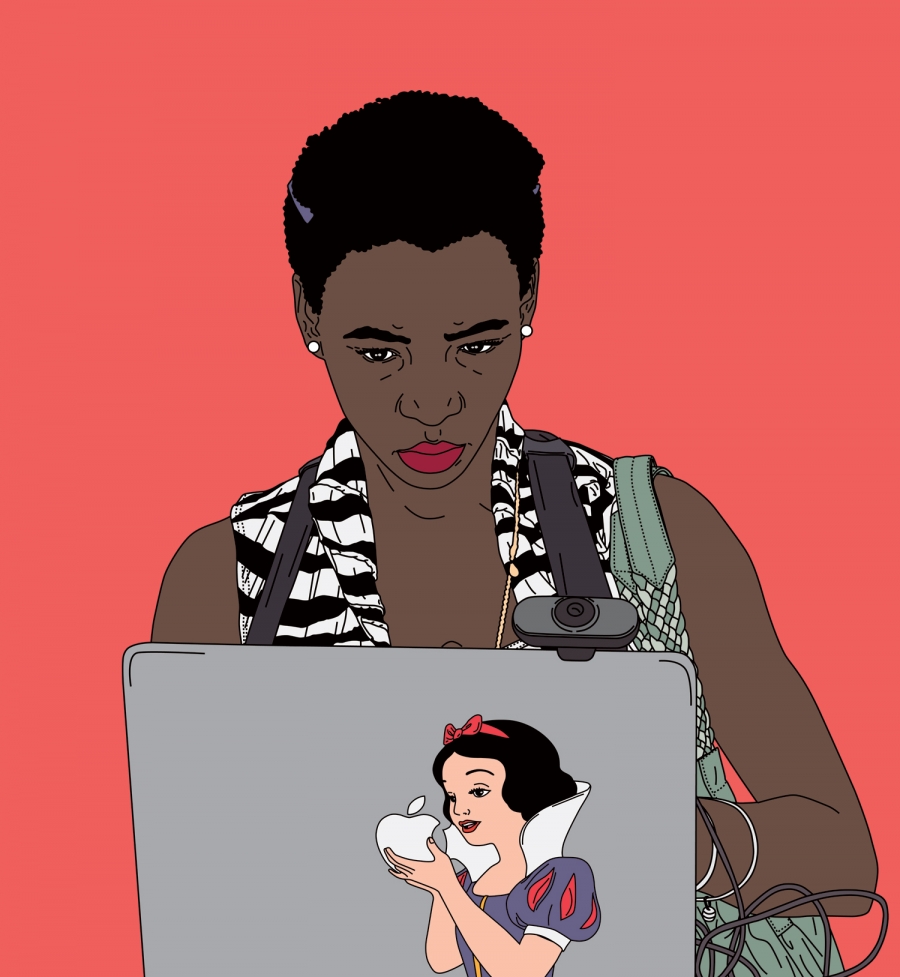 Historically, it's important to show that political actions and social changes were always made by women and men together. Women were always there but weren't always visible. This “erasure” of women’s history that puts us aside from humankind's history is an exercise of patriarchal control. In addition, women have had a dual struggle — we fight for our rights and join the social and political struggles at the same time. Any initiative to make our history visible as women is essential and empowers us. 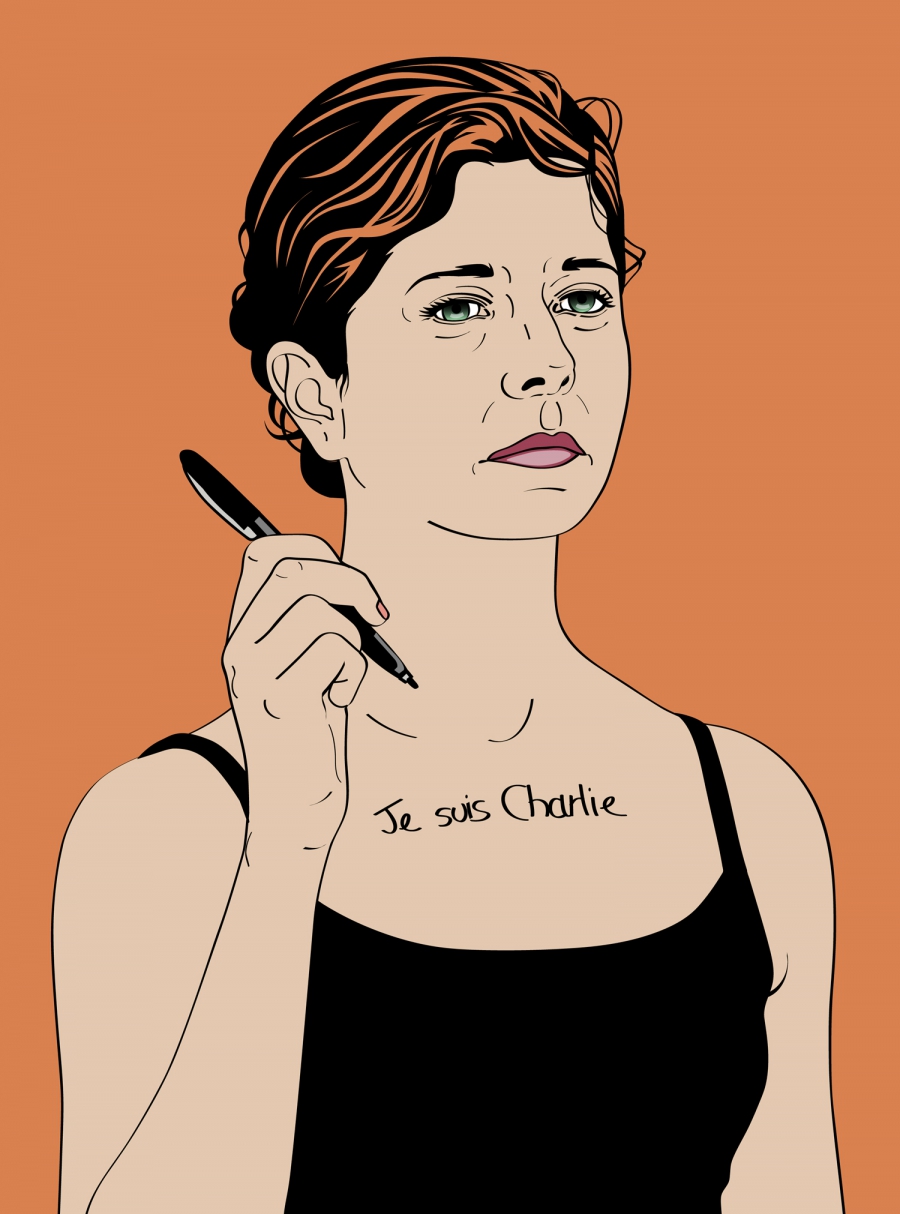 'Indignadas' responds to the Charlie Hebdo attack in Paris

IM: Some would call your work activism and protest in itself. Are you an activist beyond your artwork? Do you protest, organize or participate in activism on the streets?

MMAC: No. I am just an artist. But I believe that art is a powerful political tool. I share the images of Indignadas on the Internet under a Creative Commons license, particularly to the activists portrayed, so that they can use them for their work. I would love it if they used my Indignadas images in the streets one day.

Tweet us a photo of yourself and answer the question: What do YOU fight for? Acha-Kutscher herself will illustrate a select response by a PRI reader as part of our #HerRights series.

IM: Who are the top three most inspirational female activists to you and why?

MMA-C: It is very difficult answer. I have many, but, I would say Malala Yousafzai, Lidia Cacho and Nadal El Sadawi. Three women of different generations. All of them have risked their lives in defense of the rights of women and girls.

IM: Do you believe that protest is necessary for social and political progress?

MMA-C: Absolutely. Protest is one of the most important mediums for political and social progress. Power always tends to corrupt and generates oppressive structures. Civil society must always push the power to prevent this from happening.

IM: Is there a trend or an evolution in protest that you’ve noticed as you've documented it in your work?

MMA-C: Yes. We are living a very empowering time for women, with the emergence of a new feminism. They say we have entered a ‘fourth-wave’ of feminism thanks to feminist groups like FEMEN, Pussy Riot, SlutWalk, among others, who contribute a new activism and a new feminist imagery. Also, the support of public personalities — women and some men — who are not afraid to say they are feminists. That helps feminism, because they have an audience of millions of people.

IM: Your pieces have been blown up and used in the streets. How did this begin?

MMA-C: My pieces were exhibited in public spaces as an act to return the protest to the streets. For me it’s important that these images become part of the everyday flow of life, where anyone can see without charge. I would love that my images become part of any public protest in a near future.

IM: What are three current activist movements led by women around the world that you think people should be paying attention to?