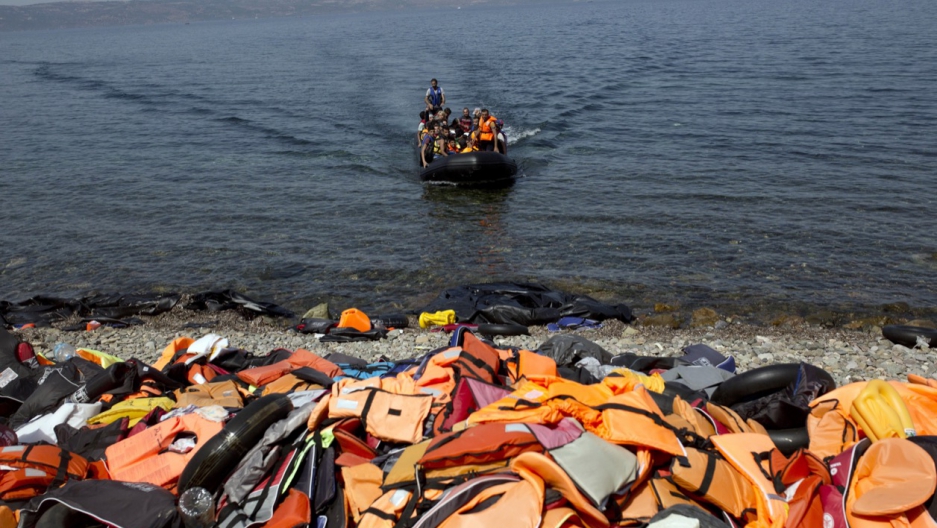 LESBOS, Greece — When driving over the dusty, undulating hills of Lesbos’ northern coast, a flash of orange from the waters of the Aegean Sea distracts. Pulling over and zooming in with a camera reveals a dark rubber boat and 50 figures looking straight ahead to the shore.

The orange is from life jackets that sell for around $23 in Turkish port cities; the figures are refugees from Syria and each day thousands arrive on the beach of this unsuspecting Greek island. Formerly associated with lounging in the sun and drinking ouzo late into the night, it is now an epicenter of the biggest refugee movement in Europe since World War II.

The scavengers usually find them first — the boat engine is their prize and they chainsaw it off and load it on a truck in a matter of minutes, and most likely resell it back to the mafia on the Turkish coast opposite. Such is the lucrative business of human trafficking.

Due to Lesbos’ close proximity to Turkey (little more than six miles away at its nearest point), the island has become one of the most popular stepping stones to Europe for those fleeing tumult and war in Syria, Iraq, Afghanistan and beyond.

Refugees arriving on Lesbos often meet a friendly face. Standing on the shore one morning, Eric Kempson squints out into the distance through a pair of binoculars.

“Today’s quite quiet, we’ve only had seven boats so far,” he says.

“There’s another two coming in. Yesterday we had 29. That was a busy day. This morning there was almost a drowning. We see a lot of dehydration as many of them have been over there in the woods for days.”

Kempson, a 60-year-old sculptor, himself is a migrant here from Hampshire, England, and has been living on the island for over 15 years with his wife and daughter.

His native Britain, meanwhile, has been heavily criticized for refusing to take more immigrants pouring into Greece and other entry points like Italy and Hungary each day by the thousands.

“It's not enough, is it? The UK and other countries should stop putting so much money into building borders and solve the problem instead, including the conflicts. If there wasn't war, people would go back home,” Kempson says.

Under pressure, UK Prime Minister David Cameron said his country will accept up to 20,000 refugees — but not the ones who’ve already slipped into Europe. Britain will instead take in Syrians who've fled their country's war to refugee camps in Lebanon and other neighboring countries.

By contrast, volunteers like Kempson are working hard to help the refugees here and now.

Lesbos’ sparsely populated northern coast afforded the Kempsons a quiet life, until the beach outside his house became a major landing point for refugees forced to risk death at sea in the absence of safe, legal routes into Europe.

Refugees reach Turkish hubs like Izmir or Bodrum, find a smuggler and arrange their transport across the sea to Greece. They buy life jackets, rubber rings, babies’ armbands and balloons to cocoon their mobile phones from the water.

“One day on the beach I found a baby's life jacket, and a doll next to it. That was the emotional hit that encouraged me to act,” Kempson says.

He and his helpers, who include other foreign residents, tourists, and volunteers sent from the Netherlands and beyond, wake up at six in the morning and head up the mountain to spot the little boats. They rush to meet them armed with bottles of water and maps. There’s an almost total absence of international humanitarian assistance for those arriving on the north coast. Though many people are offering them rides, most refugees face a 40-mile walk to the port of Mytilene in temperatures over 100 degrees Fahrenheit. Syrian refugees try to climb a slope after arriving from Turkey on the shores of the Greek island Lesbos in an inflatable dinghy on Sept. 11.

“We can barely handle what we’ve got! This is a global problem, nobody’s giving us any help at all and this is only the tip of the iceberg,” Kempson says. “When the boats stop crossing the Mediterranean we could have hundreds of thousands coming through here.”

Take Yusuf, a Syrian traveling with his wife and four kids, who like the other migrants interviewed would give only his first name. Weeks ago, they tried for three nights to cross the Syria-Turkey border — with soldiers firing live rounds at them, he says. Now he catches his breath on the beach after the latest harrowing ordeal at sea. Like many, he is overwhelmed with relief.

“We barely survived. I’m an engineer, I used to have a big injection mold business but then my factory was destroyed. And now I feel like … I have a new life. A new life! I was so worried about my kids, they are so brave.”

Beaming with pride, he starts assembling and presenting them one by one. Behind them, Kempson has received word of another boat coming in around the cove.

Some refugees call it the “death route.” Earlier this month the world was shocked by photos of 3-year-old Aylan Kurdi’s body lying motionless on a Turkish beach. Aylan had drowned trying to reach the nearby island of Kos in a smuggler’s boat.

More from GlobalPost: How social media transformed the image of a drowned Syrian child into an iconic symbol

That's not stopping them.

English literature student Ibrahim quietly gazes out toward the water he just traversed. He and 50 others spent a day and night in the woods in Turkey without water and food, waiting for their smuggler to give them the green light to sail. He gestures to the sea.

“We pay money for this,” Ibrahim says.

The average price from Turkey to Greece is $1,200 per passenger aboard a boat that carries an average of 60 people, according to numerous refugees interviewed by GlobalPost. All said they were heading for Germany. Now Germany's government says its migrant centers are filling up, and the authorities are imposing tighter border controls. Migrants line up to board a ferry at Lesbos' port of Mytilini on Sept. 9.

But arriving here on Lesbos means overcoming huge hurdles already. “We are born again, we are born again,” Ibrahim says. “Now we have a new life, no war, no blood. Peace.”

Yet another boat of bedraggled Syrians disembarks and they throw their life jackets into the sea. Some jubilantly shout, some sit and pray or smoke. Others unwrap their cellphones from waterproof plastic and take selfies or make excited calls to family back home, letting them know they’re safe.

More from GlobalPost: How one Syrian student could start a wave of refugees to Mexico

Driving back along the moonlit mountain roads, the headlights reveal an exodus of hundreds of refugees.

At a hairpin turn, creaking buses squeeze onto the side of the road to receive a line of sunbaked refugees and deposit them at the port of Mytilene.

Approximately 20,000 migrants are currently stranded on the island, trapped between the wait for police registration papers and to buy a ferry ticket to the Greek mainland. Thousands sleep in squalid camps festooned with trash and human waste. In recent days, the long delays in registering and transporting refugees from the island have led to clashes, with baton-wielding riot police beating back unwieldy crowds of migrants. It's also led to violence among the refugees themselves.

A weary German volunteer coordinating the crowds rolls a cigarette. She hasn’t slept much these days.

Exhaling loudly, she says: “I’ve given up calling it a humanitarian crisis now. This is a war.”