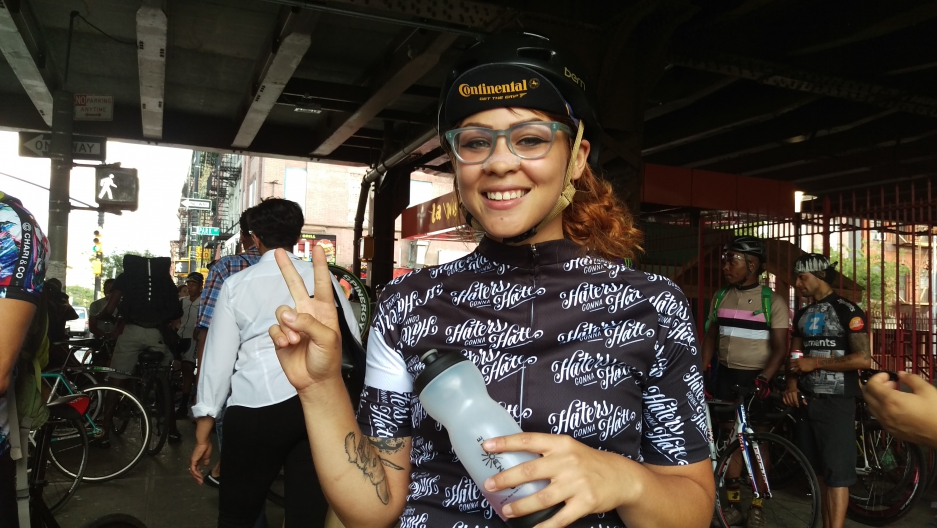 "I just want to ride my bike aggressively in every city I can before I die," says bike racer Chelsea Matias.

Almost every weekend, there’s a race going on in New York City, one you’ll probably never hear about. They take place in streets choked with traffic and honking cabs. These races require pit-stops at about a half dozen points before you reach the finish line. Speed and dexterity matter, but it helps to be a human GPS unit.

The races are sponsored by big companies like Puma, and Cinelli, the Italian bike manufacturer. But they’re not exactly legal.

“It's pretty under the radar. If you get caught breaking traffic laws, they might try to chase you. A lot of these guys know how to get out of that situation,” says Diego, who asked that I identify him by his first name. He works for Street Kings NYC, the bike messenger organizers behind this race, the La Marqueta Alleycat, which takes place in Harlem every year.

“We don't ask for permission. We try to ignore them. We hope they ignore us; we don't even want to be noticed,” Diego says.

The Tour de France this definitely isn't. I made the mistake of asking Diego why they don’t just ask the city to, you know, block off the streets for them.

“That's incredibly boring. We don't want to do that,” he says. “We want to be able to ride in the city streets as they are. The whole point is to be creative on your bike in terms of how you get to your checkpoints, weaving in and out of traffic. Without those obstacles it wouldn't be the kind of event that we enjoy.”

Add to those obstacles, the fact that a lot of these bikers are slaloming through traffic on fixed gear, brakeless bikes. But Alex Kalniv, a bike messenger veteran of these races, describes racing on a track bike as a more Zen experience.

Watch a Go-Pro video of the August Alleycat race in New York:

According to bike messenger lore, the first Alleycat was held in Toronto in the ’80s. The races quickly spread to New York and now it’s worldwide, according to Diego.

“A lot of these guys have traveled to Puerto Rico, Mexico, Australia, Japan. You can find creatures like this in any major city around the world.”

One of those creatures is Chelsea Matias, who recently returned from competing in Montreal.

“People [there] respect cyclists more than a car, so it’s a cyclist first, then a car.”

But it sounds like Montreal’s the friendly exception to the street-racing rule.

“In Puerto Rico, cars go way faster than here, and there's way too many interstate highways that are extremely, extremely dangerous. Even to ride on them, you feel like you're going to die,” Matias says.

But it’s that you’re-going-to-die feeling and the challenge of new terrain — not the $1,000 prize or the promise of a new bike frame — that motivates these racers.

“It's like, wow, I'm still alive, I'm still here, and I'm capable of doing so much more,” Matias says. “It keeps a person going. It pushes them further.” 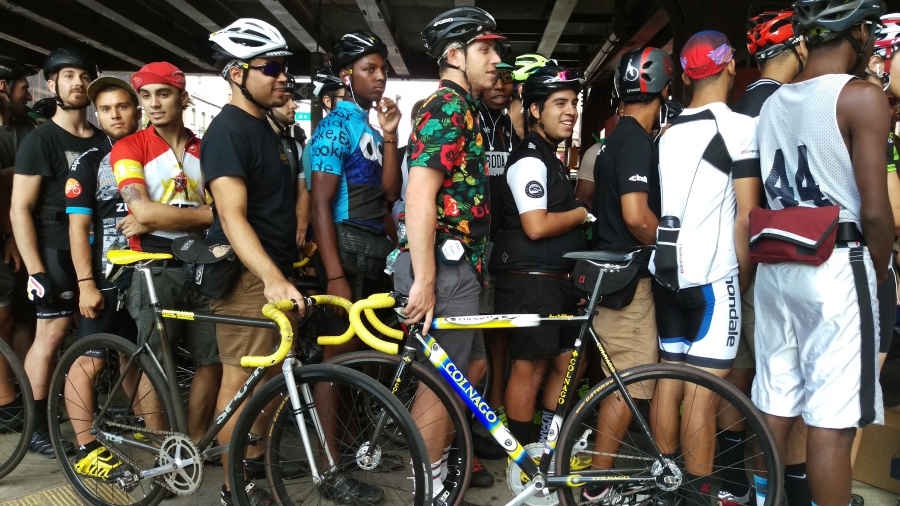 Racers lining up for their list of checkpoints at the Alleycat in New York in August. Most of the racers now aren't bike messengers.

Matias began racing two years ago, but like almost all the other bikers here today, she’s not a messenger.

“Before you had to work — you had to be a messenger to do these races,” says Shardy, another veteran courier who now organizes races.

He says the race has changed a lot over the past few years.

Unlike the seasoned couriers, these kids reach for their phones as soon as they get their list of checkpoints and start speed-clicking through maps.

Without the Internet, the “kids” would be lost, and the races would probably still be just for messengers.

But while track racing may have gone mainstream, one thing hasn’t changed: whether you’re a messenger or not, the goal remains the same.

“I just want to ride my bike aggressively in every city I can before I die,” Matias says.