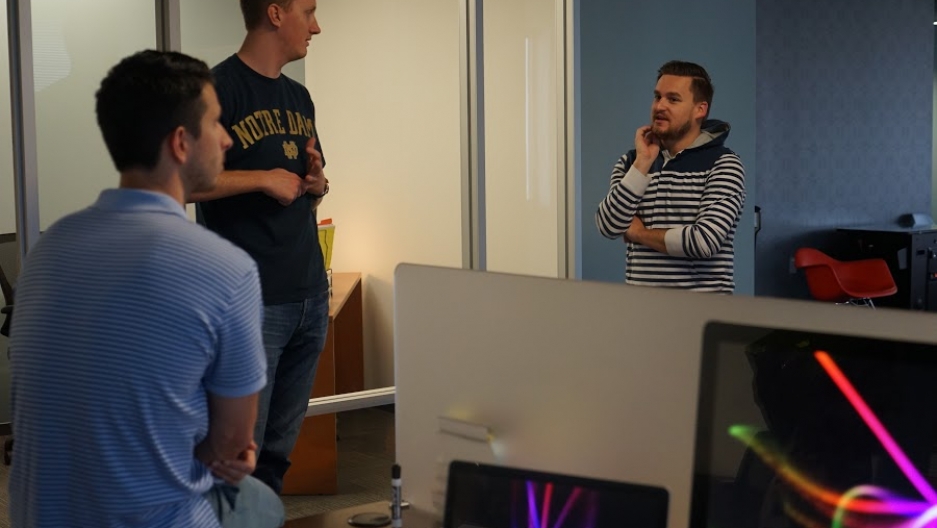 We partnered with the Dallas design firm70kft, and the team has beenupdating us throughout their design process.

Our team is comprised of people from all across the country, each with unique perspectives on the South. Two of these team members are senior designer Josh Carroll from Grand Rapids, Michigan, and designer Bailey Parkerson from Birmingham, Alabama. We asked them a few questions about how they've approached the project and how their backgrounds have played into the design process.

What were your thoughts when you first heard about this challenge?

Bailey: I was a little torn. On one side, I wanted to jump at this opportunity because most designers dream about working on projects like this. The other side of me was nervous; it seemed daunting, and it has proven to be so. Due to current events and high emotions surrounding this issue, I felt that any design would be heavily scrutinized and have the potential to offend. But once the creative process started, those fears of criticism had to be put aside to create the best possible solution.

Josh: I was excited about creating something meaningful and lasting. Once we started to dive into the project, I looked at the challenge from a variety of different angles to give us a range of different options. I tried to approach the project without fear or hesitation.

What were you most nervous about when you began this project?

Bailey: I wanted to make sure that we told the whole story, but more importantly I wanted to be sure that we told the story of now. The modern South is very different from the South we read about in history books. I am from Birmingham, Alabama, and the Birmingham I grew up in is extremely different from the Birmingham my mother experienced during the '60s. The vast majority of the modern South is a place of community, faith, and strength, but it has been overshadowed by a vocal few for too long.

Josh: I was nervous about creating a mark that was authentic to Southerners. Being from the North, I wasn't sure if I could really speak to that. But a lot of design is about being able to look at things from alternate perspectives. I think there is always some apprehension that comes from trying to tackle the unknown.

How do you think the team-based strategy has influenced the concepts created?

Bailey: With multiple team members going after one concept, it allowed us to weed out the clich and expected approaches much quicker than if we were working independently. It has also created some healthy competition between the two teams. I think it has brought out the best in everyone working on the project.

Josh: I think we have collaborated well and taken bits and pieces of each team's thinking to create one unified symbol/approach. Group discussion helped us narrow our approaches to only the strongest concepts, and I think competition between the two teams has driven us to better results.

How do you think your perspective has helped you contribute to the team?

Bailey: I've tried to provide an honest voice of what it is like to grow up in the modern South. I have been vocal about the duality that exists for the modern Southerner. I want to have pride in where I am from, but I am also extremely ashamed of the things that have happened in my region's past. How do you express pride in your home when its history has been poisoned with bigotry? This is an issue that I think many Southerners are trying to deal with.

Josh: I think my perspective enabled me to act as the devil's advocate when it came to Southern concepts. I could ask what seemed like an obvious question and team members would have to justify their thoughts. I think some of those questions qualified or disqualified certain solutions.

Throughout the process, I tried to emphasize the message of unity. I wanted to create a symbol that represented the South without representing a separation from the rest of the country.

Bailey: I agree. The final concept needs to be unifying, not polarizing.