The issue of sex-selective abortion is a huge and complex problem in parts of India. It’s led to gender imbalances in some Indian states that have reached “emergency proportions,” according to the United Nations.

Prime Minister Narendra Modi is trying to use both public relations and law enforcement to combat the practice, which seems only to be growing, especially in the country’s deeply patriarchal northwestern regions.

Get Involved with #Fight4theFoetus
Fight4theFoetus, which campaigns for awareness of female infanticide in India, launched in August 2015.

Under Indian law, it’s strictly illegal for a doctor to reveal the sex of a fetus “by any words, by any sign, by any way, by any means — by emailing or anything,” says Varsha Deshpande, a lawyer and activist who’s spent more than 20 years fighting against sex selection in her home state, Maharashtra.

“We see it as genocide.” What angers her most is lax enforcement of the country’s so-called Prohibition of Sex Selection Act, which is aimed at doctors but routinely ignored.

Not if Deshpande can do anything about it. I meet her in her home in the city of Satara, a few hours south of Mumbai. It’s a Sunday afternoon, but she’s working in her living room with some colleagues. The shelves and walls are filled with awards recognizing her work.

Varsha Deshpande (right) works at her home south of Mumbai on a workshop to educate health care workers about India's laws against sex selective abortion.

Deshpande and her colleagues are organizing a workshop in another city, where they’ll teach public health workers and officials about female feticide and the law. But education is just one way Deshpande does her work. She also targets doctors who do illegal sex determination, and her most powerful tool in this fight has been pregnant women themselves.

Since 2004, Deshpande has conducted sting operations to catch doctors with the help of pregnant women, called “pregnancy decoys” in the Indian media. One of her first recruits was her acquaintance Prerna Bhilare. Ever since she got married, Bhilare says, Deshpande would jokingly say, “All right, now you’re married — when you’re pregnant you must do sting operations for me."

And Bhilare says she was happy to oblige. When  she got pregnant in 2010, she went to a clinic in another part of the state with three of Deshpande’s colleagues, who pretended to be her relatives. They told the clinic staff that Bhilhare’s in-laws were pressuring her to have only one child, a boy.

Could the doctor please find out the gender of her baby, they asked.

Bhilare says the doctor did an ultrasound, handed her a report and told her in person she needn’t worry — her fetus was male, and everything looked good. 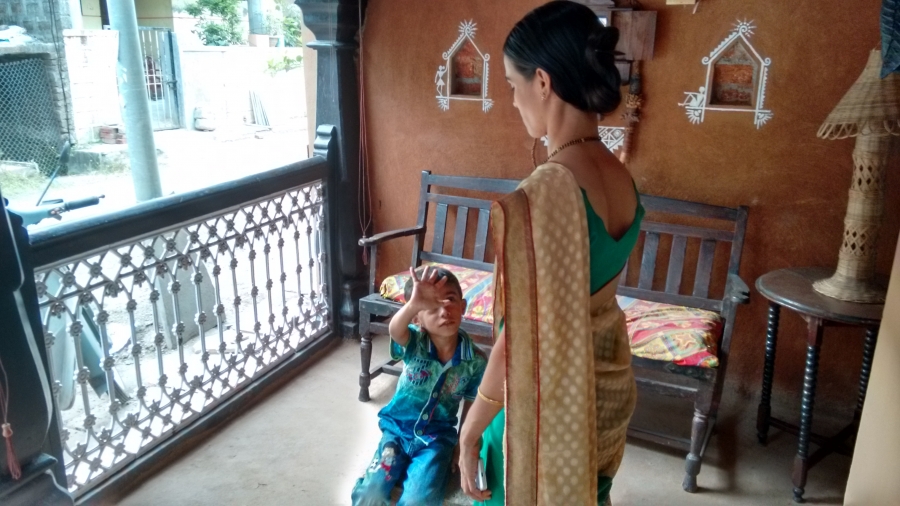 Prerna Bhilare and her son Kabir, who is now four.

Bhilare left the clinic and reported the doctor to the local authorities. In the following weeks, she took part in three more sting operations.

Her testimony led to three convictions, including of a physician couple, Dr. Sudam Munde and his wife Dr. Saraswati Munde, who were sentenced to three years in prison in 2015.

But getting the convictions wasn’t easy, says Deshpande. It took nearly three years, during which she says she received threats to her safety. “For six months, I was given protection by the police,” she says.

The Mundes had money and powerful political connections — something true for many doctors, who pay off officials and politicians. “There is huge corruption and political interference,” Deshpande says.

The threats (or offers of bribes) also extend to the women who work as decoys. Over the time it takes for the judicial process to happen, “It becomes very difficult to protect the witnesses, take them to court, ask them to talk what is truth, see that they don’t go hostile,” Deshpande says.

Still it’s worth it, Deshpande says, because these convictions get noticed. Putting people with the status of doctors behind behind bars “gives a very strong message to the rest of the state,” she says.

Deshpande knows she can only go after so many doctors on her own. Ultimately, she says, the government has to get serious about cracking down on the practice, and that means going far beyond the Modi government’s recent #SelfieWithDaughter campaign to change cultural ideas about the value of girls and women, she says.

“For girls who’ve gone eliminated, how you’re going to take selfie with them? I have to ask this of our prime minister,” Deshpande says.

But she’s hopeful that with more political will, things could turn around quickly. “If they implement the law in the next five years, by 2021, India’s face will be different. India will be safe for the women,” she says.