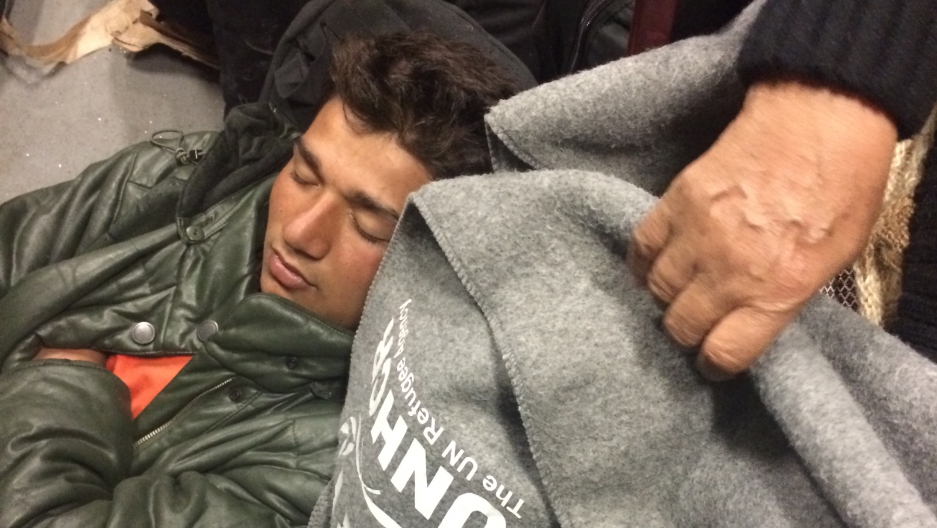 A young refugee sleeps as he waits for his bus to take off from a detention center in Hungary.

Getting on a bus near the Hungarian border town of Rozske, people seem optimistic. Most have walked from Kanjiza, a Serbian town on the other side of the border. They follow the railway tracks into the Europe Union — the tracks create breaks in the border fence.

The Hungarian police told them this bus would take them to the Austrian border.

Each day thousands of refugees from the Middle East and North Africa have been crossing into Hungary from Serbia; almost 5,000 alone on Sunday night, before Hungary closed the border.

Nobody on this bus wants to stay here in Hungary. Everyone wants to keep moving.

But instead of moving on, we soon arrive at a detention center in Rozske. Buses are going in full and coming out empty, which is not a good sign for these people who think they are going directly to Austria. 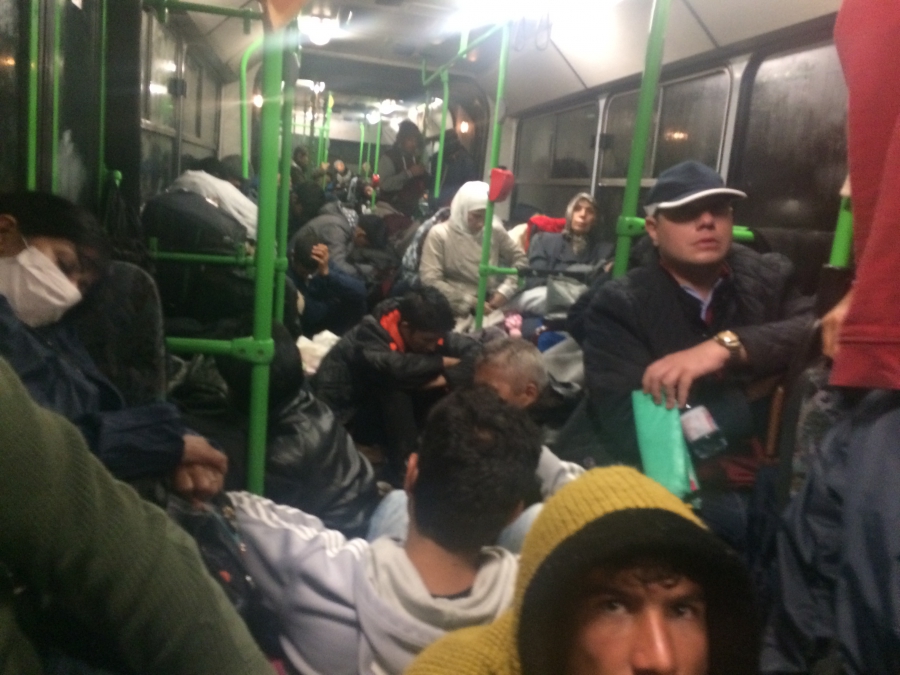 On the bus in Rozske, Hungary.

As we wait, people are allowed to get off the bus, two by two, to use the outhouse, accompanied by police officers.

After an hour, the bus starts to move again. It turns out this detention center is full.

Again, the people believe they are going to the Austrian border, but again, their hopes are dashed. The officers guarding the bus say they’re going to another facility near the Hungarian city of Kiskunhalas, about 60 miles away.

When they hear this, people start to get frantic; children are crying.

Nobody here wants to be registered and finger-printed in Hungary.  According to the EU’s Dublin Regulation on asylum seekers, they could be sent back to Hungary even if they reach Germany, where most of the people on the bus want to go. The police tell them they will be sent to the Austrian border in the morning.

Hungary has made it clear it doesn’t want these people staying here.

A Syrian woman named Layla, who has traveled with her husband and two small children all the way from Damascus, says she doesn’t understand why Hungary is holding them.

“Stay here two days? I have two children. I am pregnant. I have two babies,” she says. “We run away from the [Syrian] government. Very bad.”

She asks the Hungarian officers what the problem is.

The problem, they tell her, is there are so many people: “Lot of immigration. We help you.”

But after almost 10 hours crammed on the bus, people are angry and confused. They demand to know where they are, where they’re going and when they will go to Germany.

The guards tell them, tomorrow morning they’ll head out.

But the next morning they are still in the camp. A man calls me on his mobile phone from inside and tells me the conditions are terrible.

He says they staged a mini-hunger strike, asking for milk for the children. They are still in the camp despite being promised they would head immediately to the Austrian border.

The man sends pictures from inside the detention center of beds soaked with water and children sleeping in the cold.

Hungary is overwhelmed with refugees. Thousands continue to arrive, and most are just desperate to move on.