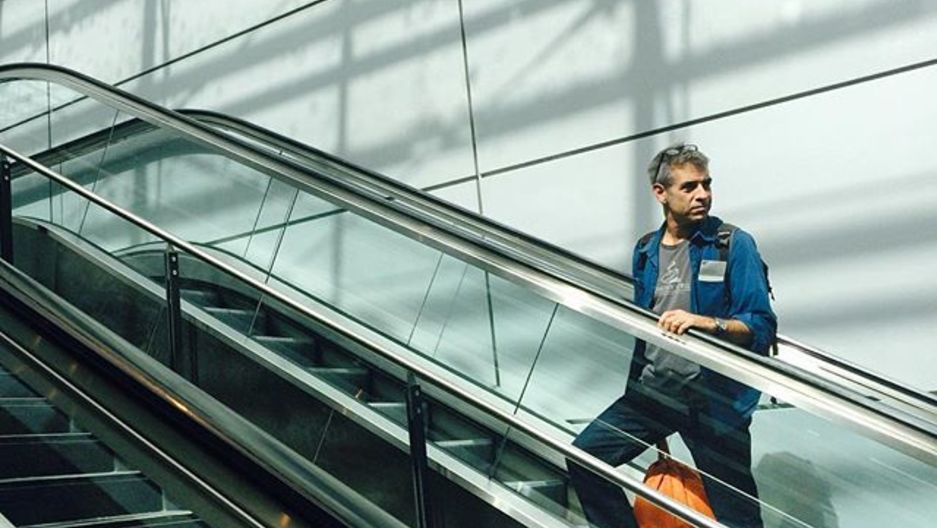 As the Across Women's Lives team travels the chaotic streets of Mumbai this week, meeting inspirational women and reporting on their feats of feminism, we'd like to give you a peek into the reporting process like never before.

All month we will feature a curated social media digest from the whole team, as well as dispatches from different #HerRights journalists on the ground. First up, Marco Werman, host of PRI's The World.

We made it to Frankfurt. Next stop, Mumbai.

"Slowly we seem to be picking up this, I would say 'disease' from the West about body image that is thrust upon you if you are a woman entertainer or an artist in particular. You are expected to dress up to invoke a sexual desire, to seduce the male. And you are expected to fit the dimensions that somebody else has set in terms of standards of beauty and perfection. I don't wear the heels, I don't starve myself, I don't seem to have the standard dimensions that are expected out of me. I love dressing up. I like looking pretty, I don't want to go around with armpit hair hanging out. But even until about a decade ago in India, women in entertainment who went on stage did not have so much pressure. We had our own ideas about what is beautiful. It included a lot of curves and a big fat bum, and it was all OK. But now we want to fit into this generic idea of what looks beautiful." [@sonamohapatra | #Mumbai, India] #HerRights photo: @marcowerman

The other day, I asked radio producer Chhavi Sachdev, who’s been working with us on the ground here in Mumbai, what she missed the most about Boston, where she lived before returning to her hometown. “The quiet,” she replied without hesitation. 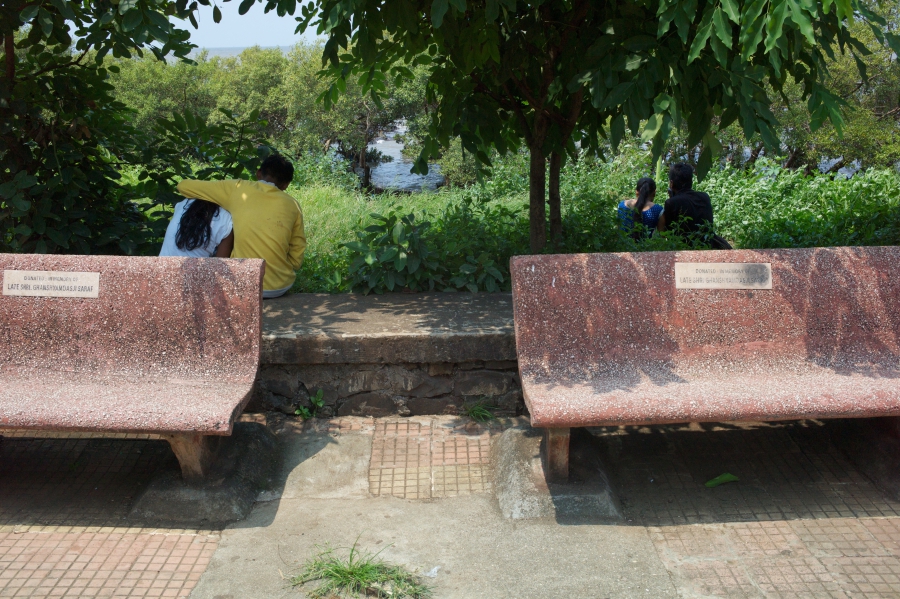 I get that. And already I miss it. Mumbai is not the city that never sleeps. It does. But until it clocks off late at night, it's loud. The three-wheeled onomatopoeic tuk-tuks, or auto-rickshaws, that announce themselves by their engine, toy-horns, or both. The bicycle bells. The dense traffic punctuated by incessant beeping, even if it’s ineffective at clearing the path ahead. Surprisingly, emotions don’t seem to rise. There’s not much shouting in traffic. But in the street, everyone talks. Marathi and Hindi banter ricochets through the air.

This description will sound cliché to anyone who’s visited Mumbai. And really, aside from a few added sonic details, it’s not that much different from a bad rush hour in Boston. But this is a city of 22 million people, squeezed close together because they have to be. The wealthy can choose where they want to live, but the vast majority of this city’s residents are not going to drift too far from the center of Mumbai, because otherwise you’re facing commutes to work of more than two hours each way. 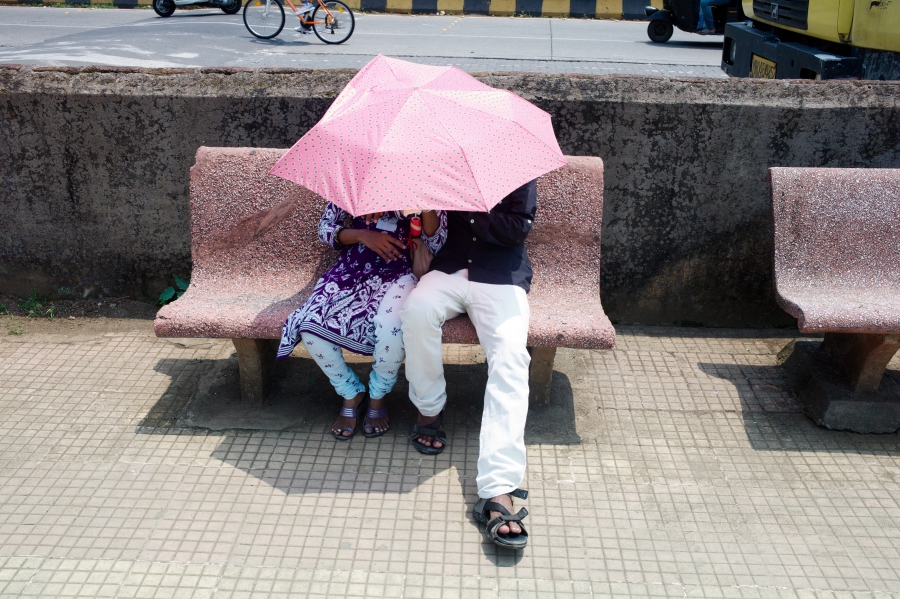 And between the population density (one million people per square mile in some places — think about that for a moment), the smoke of open fires and the heavy humidity of the monsoon season, it feels like there’s a dome encasing the sound and you can’t escape it.

Even civil servants with modest salaries find themselves living in cramped spaces, cheek by jowl with neighbors, not necessarily in apartment blocks. Places that if you saw them, you would call a slum. This is how 70 percent of Mumbai lives. Think Brazilian favelas, where there is a sense of permanence to the dwellings, even if they look like they were designed by Dr. Seuss: boxy apartments of wood and mud brick, zinc siding and tarpaulins, stacked side-by-side or on top of one another, ladders and steps tying rooms and flats together. Alleys leading to water pumps for cooking, bathing and drinking. Open electrical wiring that is so knotted, it looks like clusters of black instant noodles.

Last night, producer Andrea Crossan and I went out for a walk in the Bandra West neighborhood near our hotel. We took in the sights at the Bandra Fair, and then tried circling back, but got lost in one of those slums. It wasn’t as vast or as decrepit as Dharavi, where I took a couple of deep dives last week. But it was far from middle-class, even though a lot of middle-class Bombayites live there. It seemed the deeper we wandered, the alleys funneled us into narrower spaces. No longer were there horns or bells ringing or loud auto-rickshaws. I dodged half-dressed men and women in loosely wrapped saris, straining to carry buckets of water to their homes. The paving stones were slippery. And it felt like we might not find our way out.

But any anxiety that might have gripped me was dispelled because when I was there, I was reminded what a semi-quiet neighborhood sounded like. 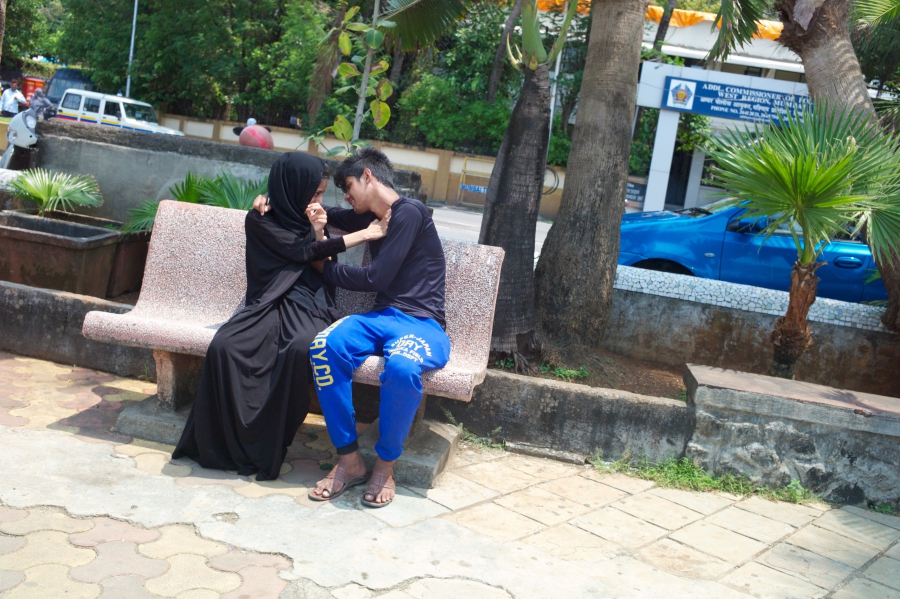 On the other side of the hotel, on the Arabian Sea waterfront, you see quite a few people trying to escape the crowds and noise. Young couples, in love or in crush, courting each other; boys trying to cop a kiss in one of the few places where they hope they won’t be bothered, perhaps many miles from their homes. The noxious smell wafting up from the sewage among the rocks at low tide doesn’t make for a romantic setting. But here in Bandstand, as it’s known, under the stifling midday sun, this is their best bet for solitude.