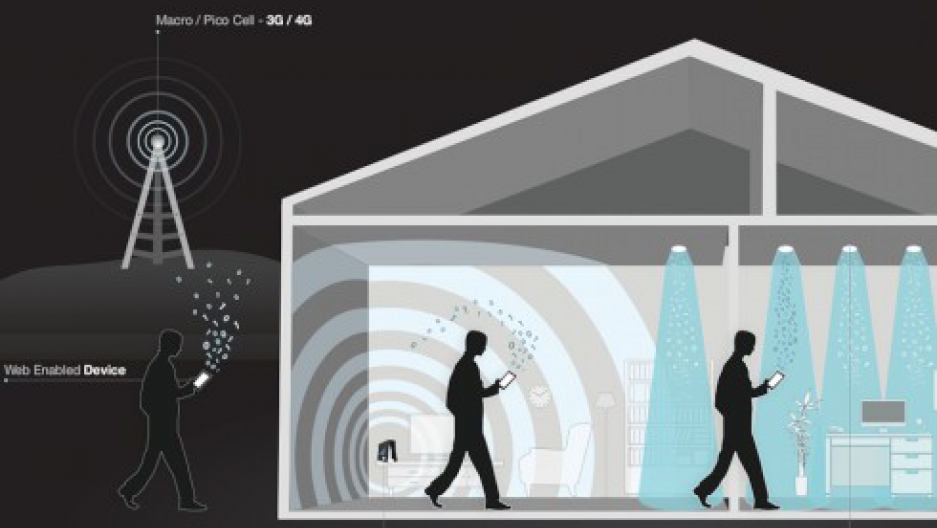 PureLiFi's illustrates how a user would move from LTE to WiFi to LiFi.

Lighting has come a long way since Tom Edison lit his first incandescent bulb in the 1880s. LED bulbs are popping up everywhere, on planes, car headlights, in your phone. When you buy a new light bulb now, chances are it's going to be an LED.

At the heart of every LED is not a little wire. If you open up an LED, there's a semiconductor in there, and engineers are exploring more ways to use that semiconductor — everything from wireless data streaming to secure communication systems and in-flight networking.

Engineer Harald Haas, co-founder of pureLiFi, explains how LEDs can be used to transmit information:

“[LEDs] have the property that we can change the light that comes out of an LED very, very quickly. That change in the brightness is what we exploit in order to encode data extremely fast, so that the receiver will be a decoder, a photo detector, which will then see these changes in the light intensity in a way a human eye would not be able to detect. To a human eye, it would be simply constant light, but for a photo detector, it is a change in the intensity, and then we have algorithms that recover these changes in intensity and get back the data stream,” Haas says.

There are many advantages to using LEDs to transmit information. For one thing, LEDs can communicate much faster than WiFi. At 15 gigabits per second, LEDs are more than twice as fast as the fastest WiFi.

What’s more, the visible light spectrum is about ten thousand times larger than the radio spectrum. This would allow communication systems to not only use a huge amount of free spectrum, but use a spectrum that’s already been set up.

“We can use vast amount of free spectrum, which is unlicensed and basically installed everywhere. ... It's in cars, in our LED lights at home, in streetlights and so on. It's ubiquitous, it's already there. We can use existing infrastructure in creating a very efficient sort of cellular communication,” Haas says.

Haas argues that LiFi would also be available in places where communication is typically difficult.

“We can use LiFi in areas where we traditionally can't use radio, such as on the water, or intrinsically unsafe environments like petrochemical plants or oil rigs, everywhere where an antenna could spark an explosion,” Haas says.

One interesting application could be to use car headlights to communicate with other drivers on the road.

“We can use these LEDs to transmit data from car to car, and use the back light to relay back the information. This is a way we can enhance safety on our roads, and even extend division. Normally you see the car in front of you, but if you were able to relay high-definition video from, say, three cars in front of you, you could see earlier what's happening on the street and therefore enhance security. That's actually one of the many applications that we see with this sort of emerging technology,” Haas says.

Haas and his coworkers are already on to the third generation of advanced LED products in pilot projects everywhere from the security industry to communications and lighting. They foresee the LED light industry changing rapidly in the near future to include additional features.

“That is where LiFi plays a key role, because with LiFi we create a channel that could host thousands of applications. From home sensing of interior, you'd find out if people have fallen down, you could find out the way you would navigate indoors. So it's for indoor navigation, and many, many more applications would be possible with light,” Haas says.

As far as integrating laptops and other personal devices with LED technology, Haas says the process would be relatively straightforward.

“At the moment, it's a device that you stick into the USB port of your laptop. We are now on a very, very radical path towards miniaturization. We will see, soon, dongles coming out, and then eventually, if everyone sees the big advantage of that technology, we are very confident that we will be integrated into smartphones,” Haas says.