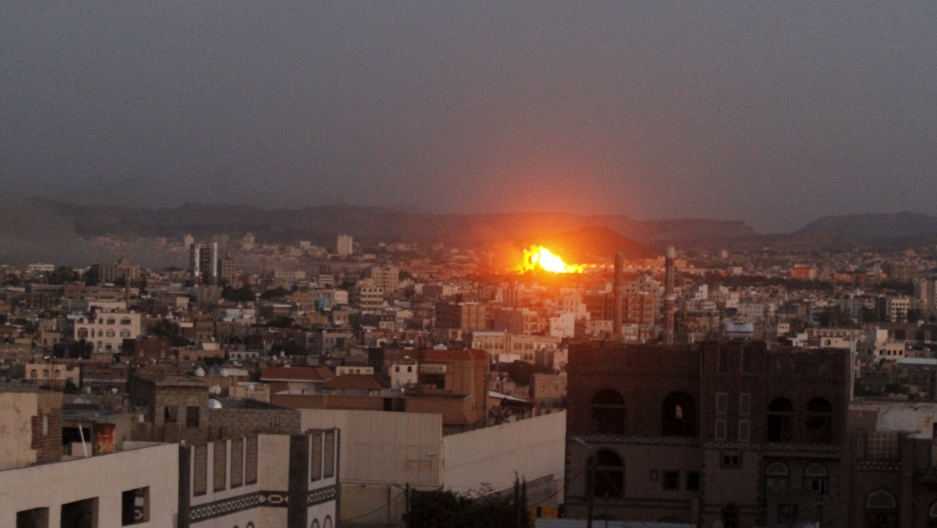 An explosion is seen after a Saudi-led air strike hit the weapons depots at a Houthi-controlled military base in Yemen's capital Sanaa September 12, 2015.

Aziz Morfeq woke at 4 a.m. Saturday to the sound of his city under attack. That in itself is not unusual. He’s often been robbed of sleep over the past five months. “I wake up by the sound of the explosions,” he said via text message, “but when I try to sleep again I hear the missiles. I feel worried because they are getting closer to us.”

Aziz is a 24-year-old resident of Sanaa, the capital of Yemen. He works for an NGO in Sanaa, Basement Cultural Foundation, where he helps organize performances and events.

Since last fall his city has been under the control of a northern Yemeni insurgent group, the Houthis. In February this year the rebel group unseated the internationally recognized president of Yemen, and in the spring its troops marched southward to take control of most of Yemen’s cities.

A coalition air force led by Saudi Arabia began striking back at the Houthis to try to restore the deposed Yemeni president. There have been thousands of airstrikes on Sanaa since then, with Saudi and UAE jets dropping bombs and firing missiles, sometimes for hours at a time.

On Saturday morning the missiles got very close.

Local broadcast media are less than reliable, controlled as they are by the Houthis and their chief supporter, political strongman Ali Abdullah Saleh. So during Saturday’s pre-dawn blitz, Aziz turned to his smartphone like many Yemenis, and he scrolled through a flood of social media images and texts to figure out what was going on.

“The airstrike was in the Al Asbahi area in Sanaa,” Aziz confirmed. “It’s in southeast Sanaa.” Soon after the first explosions he learned the unnerving specifics of the strike. “My friend, Yasmin, wrote a post about it… that her aunt and son were killed, and I asked for further information and she told me more about it," Aziz said. Yasmin's aunt "was a widow. She left three children behind. It’s terrible. And nobody’s safe anymore."

He then posted the news himself.

The house of Yasmin's aunt and cousin. I took it from fb. #Sanaa #Yemen #HRW pic.twitter.com/eVdnJc4JXX

Throughout the day other images from Al Asbahi began to appear online. Videos from a distance, mobile phone shots of the bombed-out houses, closeups of the dead.

I keep trying to record the actual hit. This is fastest I got. Missed the speed of light but recorded speed of sound! pic.twitter.com/UMYX0DgNiz

Good morning world. I survived yet another intense round of Saudi airstrikes on my city, others not so lucky #Yemen pic.twitter.com/x45qpBdKYb

Most Americans know little about the war in Yemen. Many Yemenis say they know too much. Aziz Morfeq says he is thankful that he has not lost a family member or a close friend.

“But,” Aziz says “I know some people who lost their relatives in Aden, because of the conflict there. I know someone on Facebook who died by militia in Taiz. I don’t remember everything; there is a lot of death.”

RELATED: Yemenis are terrorized by a US weapon, sold to the Saudis

Does your 401(k) include stocks in companies making money in the Saudi bombardment of Yemen?