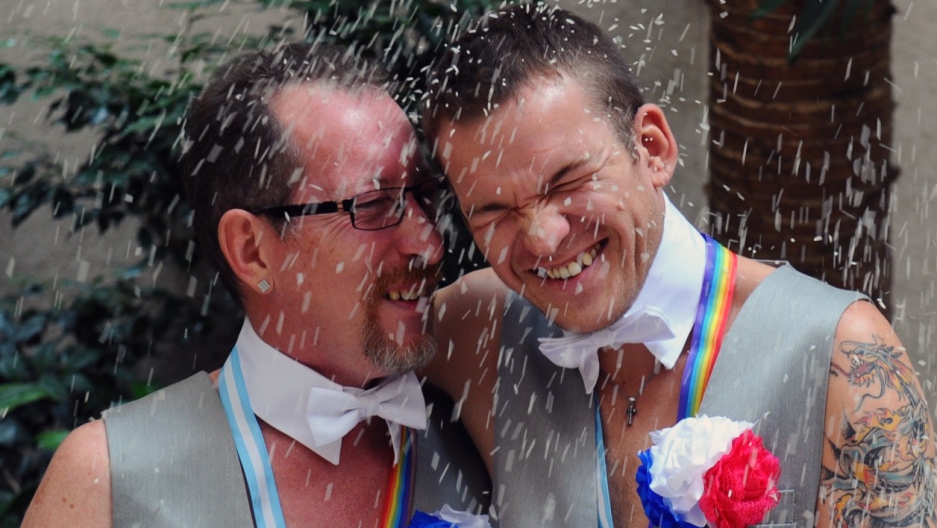 “Having the same rights to marry has given us freedom, dignity, happiness and, above all, equality,” says Angie Cordera of her wedding in Argentina to her long-time partner Sofia Rivera.

Cordera, 38, is an accountant from Colombia. Her bride Rivera, also 38, is a psychologist from Spain.

“We loved Buenos Aires, the food, the nightlife, the culture, as well as everything being super-cheap, but also the way other people looked at us,” Cordera says.

“No one judges you. We were able to walk hand in hand, and even kissing, in public, and no one said anything.”

The pair are part of a growing trend in the Argentine capital — same-sex wedding tourism.

The fundamentals driving the trend are clear. Although 20 nations around the world now allow same-sex couples to marry, about 170, from Australia to Peru, do not.

And even some of the countries that do permit it have residency or citizenship restrictions — meaning two foreign visitors can’t just roll up and get hitched.

Meanwhile, many LGBT folks from countries that allow them to tie the knot may still not be comfortable coming out publicly at home.

Sprinkle in Buenos Aires' romantic allure, and it's easy to see the city's potential for this kind of thing.

When there's a rising "destination wedding" hotspot, you'd better believe the wedding planners will be flocking.

They already have local competition. Leandro Swietarski, 35, runs Gay Marriage Argentina, and believes it's still the only travel agency dedicated exclusively to the niche market in this South American country.

Since launching in 2013, the company has helped bring over 130 foreign couples to get married.

More from GlobalPost: In Canada you could soon be walking around with tiny gay couples in your pocket

There's at least one other LGBT tourism agency in Buenos Aires, BAGayTravel. But unlike Gay Marriage Argentina, it also offers all kinds of vacation packages to its clients, just a fraction of whom actually come to get married.

Swietarski projects organizing weddings for 200 couples a year by 2017, offering packages that run from $799 to $2,999 and include everything from taking care of the red tape to photo sessions on the big day.

His clients are 75 percent female couples from around the world, including nations that allow same-sex marriage as well as those that don’t. Roughly one in three are from the United States, often simply attracted to one of Latin America’s hippest and most LGBT-friendly cities.

“When you see the love in their eyes as they wed, and see how much this means to them, the satisfaction I feel is indescribable,” says Swietarski, who previously worked in IT sales.

“Many of them live in countries where being gay was illegal until recently. Getting married was not even in their wildest dreams.”

It’s possible for gay tourists to wed in Argentina without a travel agency. But there are complications. At least one of the couple needs to arrive there weeks before the big day, to deal with various bureaucratic requirements, including being certified by a notary as Buenos Aires residents.

Ana Lavaque, head of the city’s public records office, says you even have to get a syphilis test inside Argentina around a week earlier, so that the results are available before the big day.

The couple would also need to track down two Buenos Aires residents to act as their witnesses.

From the time gay marriage became legal in the city in 2010 through June 2015, a total of 3,008 same-sex weddings were conducted, including both locals and foreigners. There were another 3,058 in the surrounding province of Buenos Aires over a similar period, local officials said.

Other Latin American countries have had remarkable momentum toward marriage equality in recent years. Check out this map:

More from GlobalPost: This map shows where same-sex couples can marry across Latin America

But the region has a long way to go before gays and lesbians can hold hands wherever they please. As GlobalPost has previously reported, much of Latin America has a terrifying homophobic violence problem.

Swietarski stresses that Argentina’s tolerant attitudes toward the LGBT community evolved long ago, and are rooted in Argentina’s identity as a nation of immigrants, and Buenos Aires’ cosmopolitan atmosphere.

It’s certainly not that the entire population is on board with the capital's openness.

Today, Argentine-born Pope Francis may be known for publicly refusing to “judge” gays, a watershed moment for the Catholic Church. But as the top clergyman in his home country in 2010, then-Cardinal Jorge Bergoglio led large protests against the government's marriage reform, calling it a "destructive attack on God's plan."

Still, the country did bring in same-sex marriage a full half-decade before the US Supreme Court ruled in favor of it.

Cordera and Rivera live together in Colombia's capital Bogota. The main reason they chose to wed in Buenos Aires, she says, was that gay marriage is still one step away from being fully legal in Colombia, while Spain only allows it for its own nationals.

But there is also another factor. “Sofia never felt comfortable about her sexual orientation in Spain,” Cordera says. “She is from a small town where people talk and whisper.”

That changed when the Spaniard arrived in Colombia and was open about her sexual identity from day one, including living with Cordera for the last eight years. Yet nothing has compared to their life-changing trip to Buenos Aires.

“We would recommend it to anyone, especially any couple that can’t marry at home,” Cordera adds. “Argentina is an example for the world.”