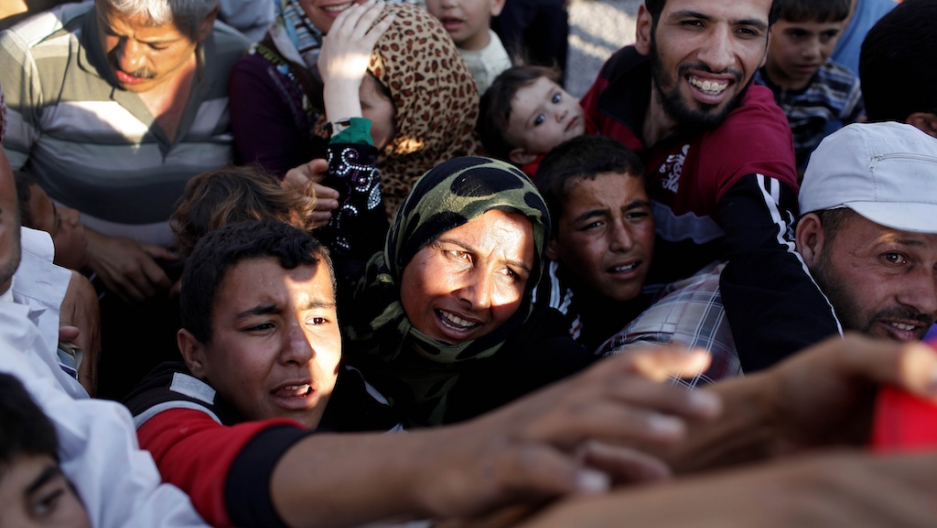 Syrian refugees wait for supplies near the Turkish border post of Akcakale, province of Sanliurfa, on June 17, 2015. Some hundreds of Syrian refugees are returning to Tal Abyad from Turkey a day after Kurdish People's Protection Units, or YPG fighters evicted Islamic State group fighters from the area
Credit: Gokhan Sahin
Share

GUADALAJARA, Mexico — Mexico has a proud history of welcoming refugees fleeing war and persecution around the world.

Yet the Mexican government has done surprisingly little to help the four million Syrians forced to flee their country’s bloody conflict, an exodus that has triggered Europe’s worst migration crisis since World War II.

The leaders of Latin America’s second largest economy have been strangely silent as neighbors such as Brazil, Argentina, Uruguay, Chile and Venezuela open their doors to the refugees.

But Mexico's reticence is starting to change.

Senators of all political stripes on Thursday implored President Enrique Peña Nieto and his government to allow in as many Syrian refugees as possible.

Notwithstanding the multitude of problems facing Mexico, the country could not "remain indifferent to what is happening in Syria and to the suffering of so many people," Senator Ernesto Cordero Arroyo told his colleagues.

Check out his full speech here.

The bipartisan Senate move comes amid growing public support in Mexico for the country to take in Syrian refugees.

More than 167,000 people have so far signed a petition calling on Peña Nieto and Foreign Affairs Minister Claudia Ruiz Massieu to allow 10,000 Syrians who have fled the conflict into the country.

“Our country has a long tradition of asylum," said Dallas-based lawyer Nelson Olavarrieta, who launched the campaign on the petition website Change.org a week ago.

"The generation of Spanish that were received in the late 1930s (during the Spanish Civil War) and made Mexico their home, have made the country greater.”

More from GlobalPost: This British volunteer is helping the boatloads of refugees his government won't accept

All this comes as Mexico prepares to receive a small group of Syrian refugees, albeit unofficially.

Thirty Syrian university students, most of whom have been living in refugee camps in Jordan, have been invited to Mexico to finish their studies at some of the country's most prestigious universities.

The Habesha Project, the non-government organization spearheading the program, said the selected students would be given student visas, full scholarships, health insurance, accommodation with a local family and a monthly stipend for the duration of their studies.

The idea is that once the students have finished their degrees in Mexico they will return to Syria to help in the reconstruction of their country or, if the war is still raging, apply for refugee status in Mexico.

The first student, Essa Hassan, is due to arrive in Mexico on Sept. 17.

The 26-year-old, who fled Syria in 2012 so he wouldn't have to fight for Syrian President Bashar al-Assad's forces, will be sent to the Universidad Panamericana in the central state of Aguascalientes, which is one of two private universities that has so far agreed to receive the students, Luis Samano, the spokesperson for the Habesha Project, told GlobalPost.

The hope is he won't be the last.

“We hope that with Hassan the door will be opened,” Samano told the Mexican newspaper El Universal.

The Habesha Project, which was launched in 2013, is relying on donations to bring the students to Mexico and has launched an online campaign #EnMexicoSePuede, which translates into English as It's Possible In Mexico, to draw attention to the project and raise much-needed funds.

The arrival of the Syrian students could add to growing pressure on Mexican leaders to admit thousands more refugees.

While Mexico might be better known these days as a country of transit for the thousands of migrants traveling from troubled Central American countries to the United States, lots of Mexicans think their country could be a safe haven once again.