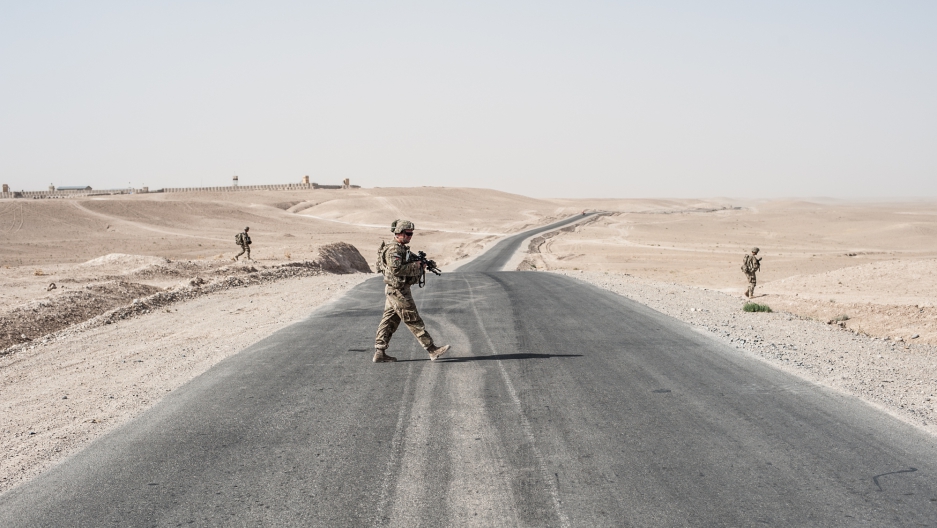 The Ring Road as it passes through Qalat, capital of Zabul Province.
Credit: Ben Brody
Share

KABUL, Afghanistan — The road that rings Afghanistan may be paved with good intentions, but it is also pocked by the aftermath of recent roadside bombs, littered with the carcasses of wrecked vehicles and clogged with the traffic of a country that keeps moving forward but remains unsure precisely where it is headed.

The GroundTruth Project is back out on the road in Afghanistan as part of our continuing coverage of the country through our Special Report, “Foreverstan: Afghanistan and the Road to Ending America’s Longest War.”

To mark September 11th, as the US-led war in Afghanistan enters its 15th year, we invite you to dig even deeper into our reporting by listening to a new GroundTruth podcast which traces the history of the conflict from its earliest days to its most recent spate of Taliban attacks in northern Afghanistan.

Along Afghanistan’s legendary ring road, 1,300 miles of pavement that connect the country’s major cities, you can join our team as we bring you the sounds of a country undergoing a dramatic transition, as well as the voices of its people, who reflect a mix of resilience, fear and hope.

Our journey also turns off the Ring Road and back to the village of Deh’Subz.

There we revisited the Zabuli Girls School and observed as its students, their families and faculty celebrated a milestone for the community as they laid the foundation for a new community college where graduates of the high school can now go to prepare for professions such as nursing and midwifery.

Beth Murphy, director of GroundTruth Films, has just returned from the trip and, as she put it, “The groundbreaking of the Razia Jan Community College won’t be written up in any history books. But to be here is to know that something momentous is happening. Something for which there is only a before and an after.”

And as one of the students, Breshna, put it, “It was a historic day for us, because girls never speak in front of the men.”

Through the Foreverstan site, you can go behind the scenes of our reporting with photographer and journalist Ben Brody, who is himself a US Army veteran, and his view of how the country has changed since he began. Our Afghan colleague Zabi, who helped us with navigation and translation, shares just what it’s like to live day-to-day with the violence that seems so remote to most of us.

GroundTruth’s Jean MacKenzie, who is based in Kabul, brings us three more of her well-crafted profiles of the millennial generation in Afghanistan. We meet the founder of a prominent social media agency, Ahmad Shuja; a successful entrepreneur who only dreams of how to unite her peers to help the country, Shaharzad Akbar; and a deeply traditional religious thinker, Mohammad Mudaseer.

MacKenzie lives in Kabul training young journalists for an Afghan non-governmental organization and has a daily connection to a vibrant new generation that is the future of Afghanistan. Teaching a new generation of journalists in Afghanistan is a big part of our reporting project. Beth has been working with a film fellow Sahra Mosawi.

Ben Brody, who GroundTruth has mentored for the last five years, is now an award-winning professional who is sharing some of his own lessons learned with a talented, young Afghan photographer named Farshad Usyan.

The United States and the international community are in the process of a “handoff” of military and political responsibilities to the Afghan people and to the institutions of civil society that have been built up over the last 14 years.

The process has engendered a great deal of cynicism and produced a fair amount of failure. We’ve tried through our reporting to document those struggles, and to also highlight the streaks of success that we’ve seen along the way, such as the girls’ school in Deh’Subz or some of the startups headed by the young entrepreneurs we have profiled.

As Western journalists who have worked extensively in Afghanistan, our team feels a sense of responsibility in handing off to a new generation of journalists in Afghanistan who have already begun to cover the story of their own country.

As Brody said, “The best local journalists I’ve worked with in Afghanistan have an incredible base of knowledge and understand their country better than any outsider.”

We’re hopeful that a new generation of storytellers will continue to emerge in Afghanistan and we intend to remain committed to supporting them in every way we can.