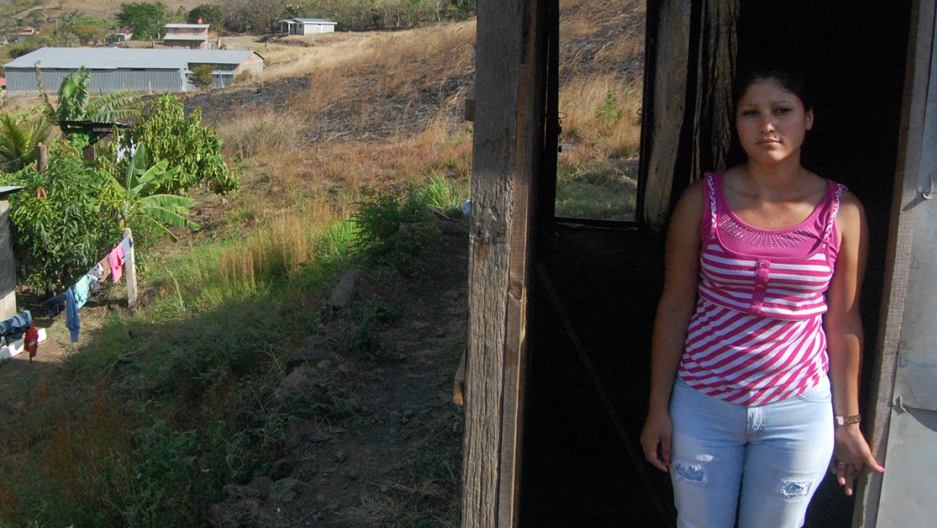 About a third of women in Nicaragua experience partner violence, and more than 15 percent have experienced sexual violence, according to the Pan American Health Organization. So in 2012, Nicaraguan lawmakers passed a law to strengthen women’s legal protection from a range of gender-specific crimes. It’s known as Law 779, and it earned international praise.

But advocates for women say the law has since been weakened, and the experiences of many women who’ve sought its protection bear that out.

Exania Obregón, 25, tried to use Law 779. She comes from the rural northern state of Matagalpa and had her daughter when she was just 14, after leaving home with a man 10 years older. Later they divorced.

Obregón and her daughter came home one night last year to find the power out. She says she had just gone to sleep when someone jumped on her and started choking her. As she struggled to escaped, she realized it was her ex-husband, she says. 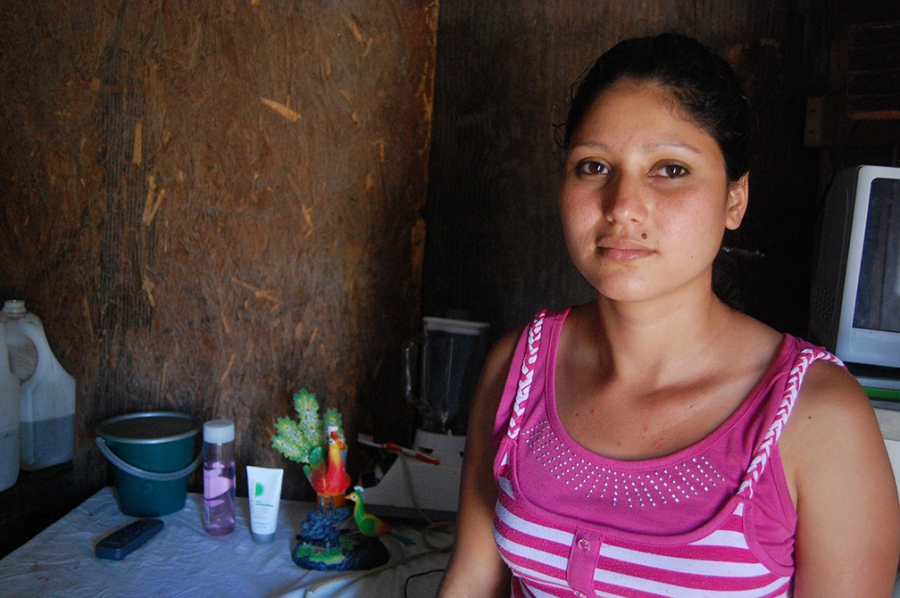 Exania Obregon is a single mom who sought help under Law 779 after being attacked by her ex-husband.  She says the police didn’t take her case seriously, and her ex-husband was never arrested or even charged.

“He had his hand shoved into my mouth, and the more I tried to scream the more he pushed his hand down,” she says.

Her 10-year-old daughter helped Obregón fight him off, and they escaped to a neighbor’s. At dawn the next day, she went to the police station. There she waited for hours to file a report.

“I repeated, ‘He came to kill me,’” she says, “And the officer just took a form and filled it out and said, ‘mediation.’”

In Nicaragua, many cases, even criminal ones, are resolved through mediation. Law 779 was originally written to exclude mediation in these specific cases, but that has since been changed. Women’s advocates say it puts women in abusive relationships at a great disadvantage.

Lucia Rodriguez is the chief of the Matagalpa Police Commission on Women and Children, the state agency where women report violence. She says “it’s also the woman’s job” to solve conflicts. The government has instituted a new campaign on the topic called “A Home is Built with Love.”

“I think it’s very important to strengthen the family, so fewer cases are brought to the courts, and so problems are resolved within the family,” says Yader Morazan, a lawyer and secretary to Matagalpa’s specialized court on gender violence, which was created by Law 779. 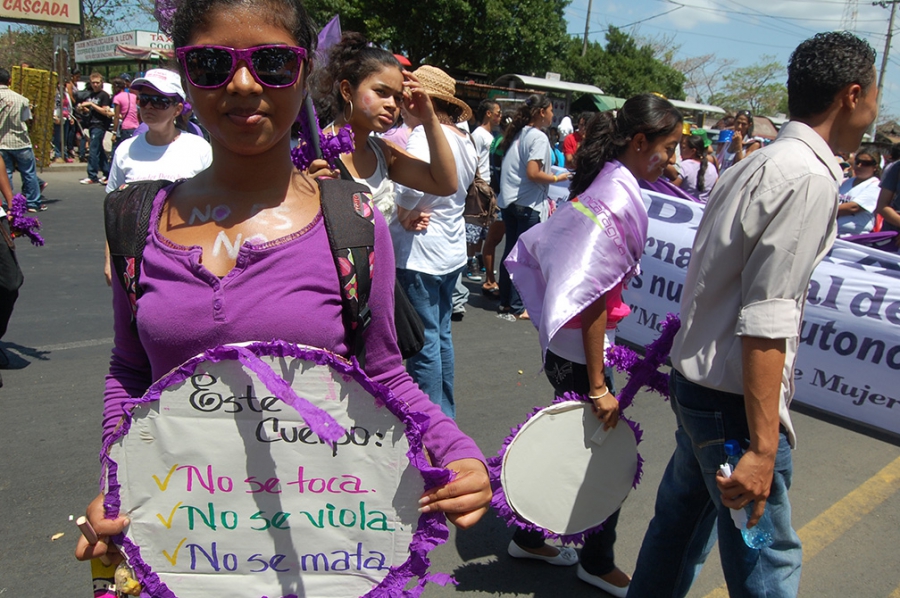 A young activist marches on International Women’s Day in 2012 with a sign that reads, “This body will not be touched, will not be raped, will not be murdered.”  Since Law 779 was passed in 2012, it has been modified to allow mediation.

But women’s advocate Ruth Matamoros says girls are most often victims of sexual violence by family members or others they know.

“The home is where crimes are committed because of the trust in the protection of the family,” Matamoros says.

Obregón says her ex-husband repeatedly threatened her in the days before the attack. But she was exhausted when she spoke to police, and agreed to mediation because she didn’t know what it was.

“Now I know what happened to me isn’t something to mediate,” she says. “How am I going to negotiate for my life when in a matter of seconds he would have killed me?”

And then there’s the critical lack of resources to enforce the law. After women file a claim under Law 779, they have to do most of the evidence gathering. Police commissioner Rodriguez says her office processes around 150 cases a month, and refers another 200 for mediation. There are only six people on staff, and “the ideal number is double that,” she says.

In Nicaragua, police commonly detain only those who have committed the most violent of crimes, or drug offenders, so many remain free while on trial. Obregón says her ex-husband continued to call and threaten her, and she and her daughter slept with the lights on. 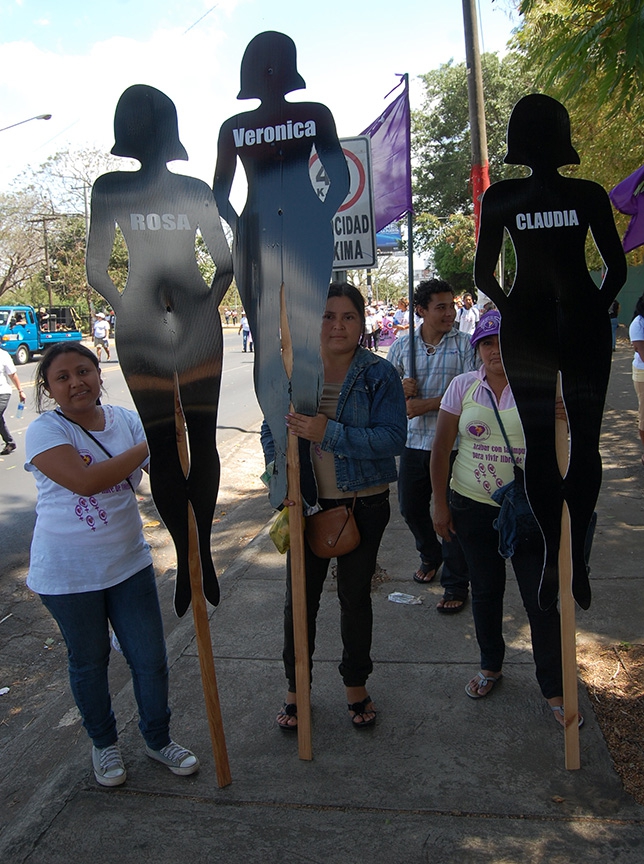 In a march for International Women’s Day in 2012, activists highlighted the growing number of femicides.  Since the passage of Law 779 in 2012, it has been rewritten so fewer murders are counted as femicides.

“If I filed a report, why haven’t they helped me yet?” she wondered. “I feel like they didn’t take my case seriously.”

Even if Obregón’s case made it to one of Nicaragua’s new specialized courts, state lawyer Morazan says it might not come to a resolution. “It’s no secret that the process is often suspended because of orders for the capture of defendants.”

It’s hard to judge the success of the law to date — the government hasn’t provided comprehensive country-wide data about claims or trials under Law 779. And the Matagalpa public prosecutor’s office didn’t respond to requests for an interview.

Advocate Matamoros calls the government’s modifications to Law 779 illegal. “We feel that women’s rights are actually being negotiated by politicians with the churches,” she says.

Matamoros says she and other advocates will fight to defend Law 779. “But we’re not going to deceive women,” she says. “Many women escape violence by another route.”

That’s what Obregón chose to do — she quit her job and moved with her daughter to another city. And for now, she’s abandoned her case under Law 779. Instead, she says, she’s working to finish her high school degree, and to do what she needs to move forward with her life.