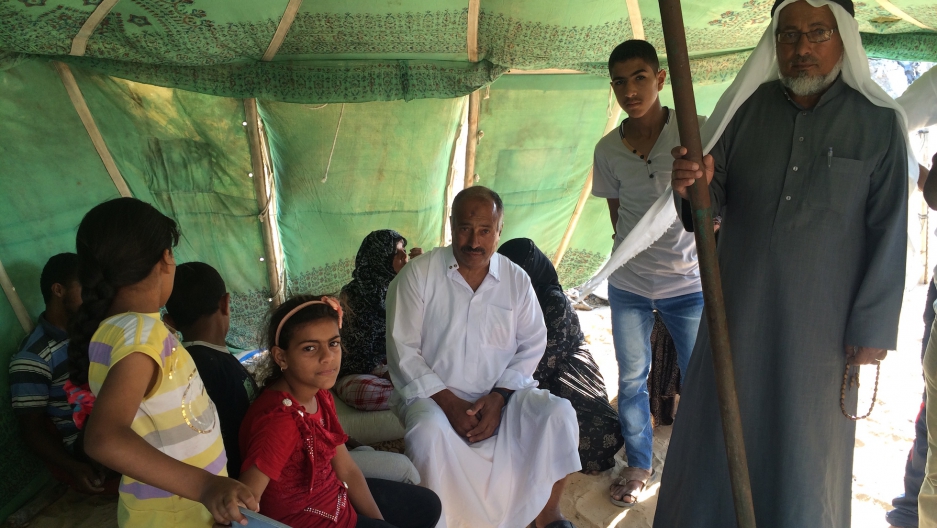 Wasfi Hamdan al-Najjar (center), 58, a Gazan farmer and the elected spokesmen for families living in temporary housing in Khuzaa, a neighborhood near the border with Israel that was pummeled by shelling during Operation Protective Edge. He sits in the makeshift tent on top of sand and rubble where homes once stood.
Credit: Laura Dean
Share

GAZA CITY, Gaza — In Gaza, where a blockade enforced by Israel for the last eight years means there is little to buy and nowhere to go, much of a family’s income goes toward building and improving their homes — a space of their own in the most densely populated piece of land on earth, where they can escape the chaos that surrounds them. But all too often that sanctuary is disturbed.

“Forty years of work I put into my house, and I left with the clothes on my back as I was preparing for Iftar [the meal to break the fast during Ramadan],” says Wasfi Hamdan al-Najjar, 58, a farmer whose home was destroyed in Israel’s latest offensive on the small coastal territory.

Operation Protective Edge killed more than 2,100 Palestinians last summer, and left 100,000 Gazans homeless. More than 10,000 homes were completely destroyed. Most Gazans have been unable to rebuild their houses, or even begin to clear the millions of tons of rubble the war left behind.

More from GlobalPost: The world promised billions to rebuild Gaza, but didn't deliver

In October international donors pledged billions of dollars in aid to help rebuild the Strip. Yet almost a year later, only a fraction of that aid has arrived. The slow delivery of aid — which makes it nearly impossible for many to rebuild their homes — is taking its toll on Gazans. The longer these problems go unaddressed, the more likely becomes the prospect of another devastating war, officials say. A Gaza lady walks in her field where she grows a few vegetables to try to sustain herself and her family. A mountain of rubble looms in the distance.

Tens of thousands remain in temporary housing that's often overcrowded and where injuries are common. Injuries are also more likely in the damaged, rubble-filled structures where some families continue to live.

Doctors Without Borders (MSF) has seen a dramatic spike in the number of burn victims, for example, related to heating and cooking accidents in damaged or temporary housing. Some 80 percent of MSF’s patients right now are burn victims, half of them under five years old. The organization has launched a burn awareness campaign in response.

On top of the difficulties resulting from Israel's blockade on Gaza, such as medicine and equipment shortages, much of Gaza’s medical infrastructure was damaged during last year's conflict and has yet to be repaired. Seventeen hospitals, 56 primary healthcare facilities, and 45 ambulances were damaged or destroyed. The total loss to Gaza’s healthcare system is estimated at $50 million.

More from GlobalPost: Trying to rebuild a house in Gaza is a Kafkaesque nightmare

Those injured in the war are entitled to free care in public hospitals, but many medications aren't available there — if they’re in the Strip at all, patients must purchase them privately. The blockade also prevents import of replacement parts for equipment like MRI machines and CT scanners.

With all of the uncleared rubble there is a risk of unexploded ordinance against which the ICRC has launched a public awareness campaign warning families living in and around rubble and particularly those working on clearing it of the dangers of unexploded shells. Gaza's children were particularly hard-hit during the conflict. Eight schools were fully destroyed during the war. Until June, there were still homeless families living in school buildings, increasing the pressure on Gaza’s already overcrowded school system.

Many schools are running double, sometimes triple shifts of classes, a situation that is likely to get worse before it gets better: 700 UNRWA schools, many of them in Gaza, almost didn't reopen this fall because the UN was running out of funds to keep them open. They received emergency money right before the school year began but their future is far from assured.

Strained at home and in the classroom,  many students who once excelled in school are struggling.

Many are traumatized by injuries and deaths among their families and friends. And the visible evidence of war all around them makes it particularly hard for children to move on.

“It affects the mental state of a child, living in a destroyed house or prefabricated housing unit, the first thing they see each day is the destruction they are trying to forget,” says Ibtihal al-Aloul, documentation officer at Save the Children.

More from GlobalPost: Gazans talk about the worst war they've lived through

Rabea Hamouda works with The Palestinian Center for Democracy and Conflict Resolution, an organization that supports children who have experienced trauma.

“One of the hardest things is to get the child to accept the idea of the loss, whether of a sibling or parent or limb,” she says. Palestinian men work on January 27, 2015 next to buildings destroyed during last year's war between Israel and Hamas-led militants, in Gaza City's al-Shejaiya neighborhood.

In Gaza, a house is more than just a house

Blocked in from all sides with few things to spend money on, in Gaza, the home is often the biggest family investment. All over the Strip parents build apartments on top of their houses, a floor for each child to live in with his or her family. It’s common to find three generations, 15 or 20 people, living in one structure.

“That’s my daughter’s apartment, and that’s my son’s — he lives in America — and that’s my other son’s, and we are going to build another floor for my youngest daughter — she’s studying in the UK,” says a grandmother in Rafah, in the southernmost part of the Strip, pointing to each floor in turn.

She is one of the lucky ones. Her house is still standing, though she lost a few cousins in the latest conflict.

Chances are good here that when a family has lost their home, their closest relatives have lost their homes too, if not their lives. That’s one reason why in some tragic cases whole families were simply wiped out this past summer.

Particularly for women in Gaza, the family is often the main social network. They might spend much of the day commuting between floors of a building — between kitchens, taking care of one another’s children. A woman’s sisters, sisters-in-law and aunts are often friends as well as relatives. Many women lack a network of non-family friends to reach out to when disaster strikes. A Palestinian family rests in the al-Shejaeiya neighborhood on July 2, 2015, in the rubble of a building that was destroyed during the fighting between Israel and Hamas militants in 2014.

With massive unemployment, little opportunity to travel outside of the Strip for work or education, and homes still in ruins, many Gazans, particularly young people, feel that their lives are on hold.

In Khuzaa, a neighborhood on the border with Israel, 27 families live in short-term shelters they call caravans. It was supposed to be a temporary measure. That was almost a year ago. So far none of them have received any money from donors to rebuild.

Wasfi Hamdan al-Najjar, 58, is a farmer who was elected to be the spokesman for the Khuzaa residents in caravans. He says when he tries to lobby international agencies for assistance, everyone just tells them to wait. “They think the caravans are good housing,” he says of the metal boxes that are hot in summer, cold in winter, and full of bugs year-round. The ceilings and walls, not built to last, are disintegrating.

Because reconstruction is taking so long, many families whose homes were destroyed can no longer afford to pay rent. Some are forced to move in with family members, or worse, back into the rubble of their former homes.

It’s not just the houses that are not being rebuilt. The people of Khuzaa were farmers.Their fields too are buried under rubble and they have no other way of making ends meet. Even on the few patches of green where they tried to plant in the last year, the soil quality was ruined by the dust from the rubble and the crops didn't grow.

“It used to be paradise,” says a young man whose field was destroyed in Shejaiya, one of the hardest-hit Gaza neighborhoods. Asked about rehabilitating the land, he shakes his head. "It costs as much to raise a tree as it does a small child.” Palestinian children play in the rubble of houses in the Gaza Strip destroyed during the 50-day war between Israel and Hamas militants. July 7, 2015.

The longer Gazans live without a roof over their head, the more difficult it will become to contain another looming threat: the Islamic State and its affiliates.

“You will find here more radicalization. You can see it, you can feel it. You’re putting people in a prison. Who can imagine that that will create moderate political views? It’s never happened in all of history, why would it happen in Gaza?” says Salah Abdelatti, a Gazan human rights worker.

Young men, unable to find jobs or get married, are at particular risk.

“My brother has been engaged for seven years,” says Reem Najjar, 17. “After Eid, if he still can’t come up with the money for a wedding and to provide for a family, the engagement will be called off.” Before the war he had at least had an apartment that he and his bride were going to move into. Then it was destroyed.

Basic goods as well as arms have long been smuggled through tunnels leading out of Gaza. One UN official lamented how the engineering expertise it takes to maintain those tunnels is being wasted.

“These minds would have been better used doing IT or engineering, no one would choose to work on the tunnels,” he says. But they have no other choice. Unemployment among youth is at 60 percent, the highest anywhere in the world.

The desire to leave the Gaza Strip is perhaps more acute now, but it isn't new.

“I don’t forgive my father as he didn’t forgive his father for not leaving,” said the same UN official.

This article is the third in a series investigating why billions of dollars pledged by the international community to rebuild Gaza following a devastating war have not been delivered. The reporting was funded by individual backers through Beacon Reader.