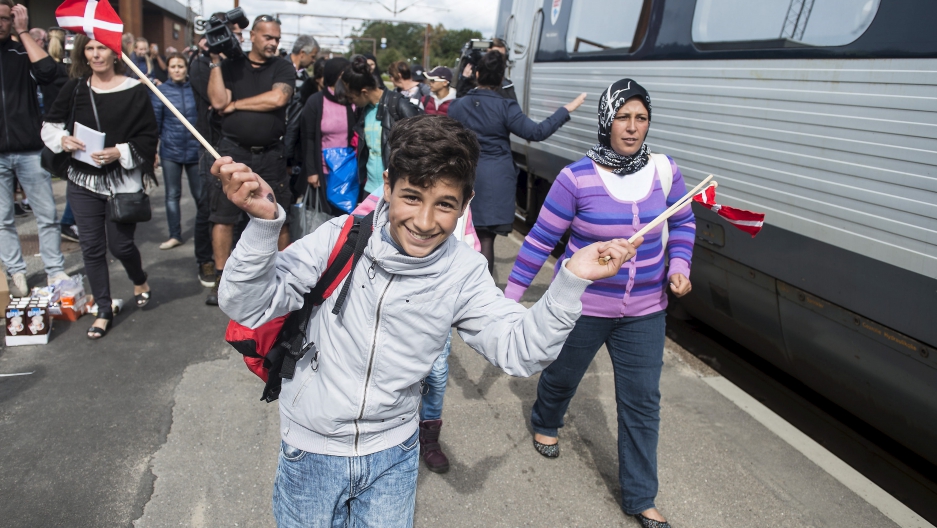 A boy waves Danish flags as he joins fellow migrants, mainly from Syria, on Padborg station to board a train heading to Sweden.

The Danish government has a message for the world’s refugees: Don’t come to Denmark.

In advertisements recently placed in Lebanese newspapers, the country’s Ministry of Immigration, Integration and Housing listed several reasons why it’s difficult for asylum seekers to gain Danish residence. For example, the ads explained that social benefits have recently been cut, and asylum applications are subject to requirements like language proficiency.

Many residents of Denmark have a different message, however. This week, Danish citizens donated blankets and food to Syrian refugees who had entered the country.

Michala Bendixen is one Dane who heard about her government’s ads and decided to do something about them. She leads a small Danish non-profit whose name says it all. It’s called Refugees Welcome.

“I feel very bad about this reputation that our government is trying to give our country,” says Bendixen. “We don’t want the world to see our country as a xenophobic and closed-down little country that doesn’t want to welcome new people.”

In an article for The Guardian, Bendixen argued that although many refugees want to reach countries like Germany and Sweden, Denmark is ready to welcome them too.

“I think that refugees deserve to be in the best places where have capacity and a good society for them to start a new life. And Denmark is a very rich, and very stable, and very open society,” she said.

So why is Denmark’s government trying to paint a different picture? According to Bendixen, the country’s politicians include an influential minority of right-leaning nationalists. It’s these politicians who have tried to restrict the country’s borders.

There are international factors, too. Under a European Union agreement called the Dublin Regulation, refugees apply for asylum just once, usually in the first European country they reach. But it’s clear that some countries have more resources and more willingness to help refugees. That’s one reason why many refugees simply want to pass through Denmark on the way to Sweden.

But the EU regulation has put Denmark in a bind. “The government and the police have been really confused about what to do,” says Bendixen. At first, a highway connecting Denmark and Germany was shut down. So were trains that were carrying migrants from elsewhere in Europe.

After the initial confusion, Denmark decided to disregard the Dublin Regulation for the moment. Bendixen says refugees are no longer being stopped on their way to Sweden. In fact, the Swedish railway isn’t currently charging for tickets to Sweden.

In short, Denmark’s government is starting to follow in the footsteps of its citizens. Recently, when refugees started walking along Danish highways in hopes of reaching Sweden, Danes started offering them rides.

That’s one part of Danish society that Bendixen feels proud of.

“The Danish civilians were starting to come in their cars and pick up people,” she said. “The civilian society was really rising, and has been extremely amazing these last couple of days.”