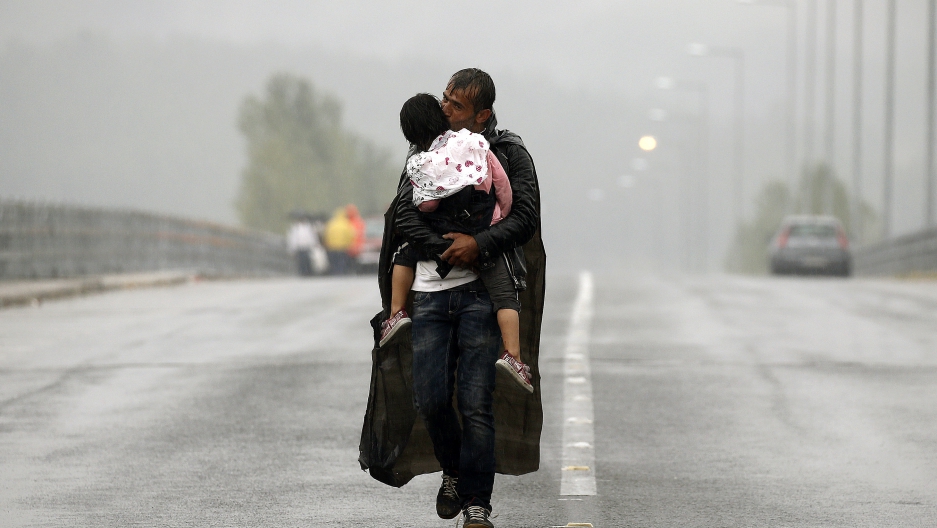 A Syrian refugee kisses his son as he walks through a rainstorm towards Greece's border with Macedonia.

Farooq Mohammed has been on the road for the past three months, patching together a journey through Iran, Turkey, Greece, Macedonia and now Serbia.

"I want to make my future," the Pakistani man says. "I'm 22 years old so I have to do something. I want to work and send money to my home because I want my sister to get married, and after that I will be happy." Mohammed, who hopes to reach Germany soon, is one of one billion people on the move right now in what the International Organization for Migration is calling the most mobile time in world history.

The Syrian crisis has drawn world attention to migrants, refugees and asylum seekers. But the IOM's Joel Millman says migration to Europe would be happening in any case because of demographic forces.

"Europe has a falling birth rate, and there's great demand for cheap imported labor. And the countries around the Mediterranean, the Middle East, North Africa — even as far away as Afghanistan — are creating a very youthful and well-trained workforce for which there is really no jobs."

Farooq Mohammed's motivation is economic, but like many migrants, he has endured dangers and humiliations along the way.

He tried to travel through Hungary a few months ago, but was thrown into what he refers to as "jail" for refusing to be fingerprinted. He says if he'd allowed authorities in Hungary to take his fingerprints he'd be required to seek residency there, instead of in a more affluent and welcoming European country such as Germany.

So now he's trying to get to Berlin via a longer route.

"I've decided I'll go to Croatia, Bosnia, Slovenia and Austria and after that Germany," says Mohammed, speaking from an information center run by the relief group ADRA that allows migrants access to Skype. "That will be the long way, and that's very dangerous." It helps that Mohammed knows a few languages, including Arabic, Urdu, Punjabi and English. Having the Google Maps app handy on his smartphone helps, too.

Thousands of Iraqis are also among those Germany-bound. A sweltering summer and an unresponsive government have led many to abandon their homeland and head to Europe, says Iraqi journalist Sahar Issa.

"They are in dire conditions, and they are making the passage because they don't see the light at the end of the tunnel," according to Issa. "It used to be an exodus of young people, of young men who are looking for their fortune. But now it is like you see whole families leaving with babies and children. They are just going, they are leaving everything behind." 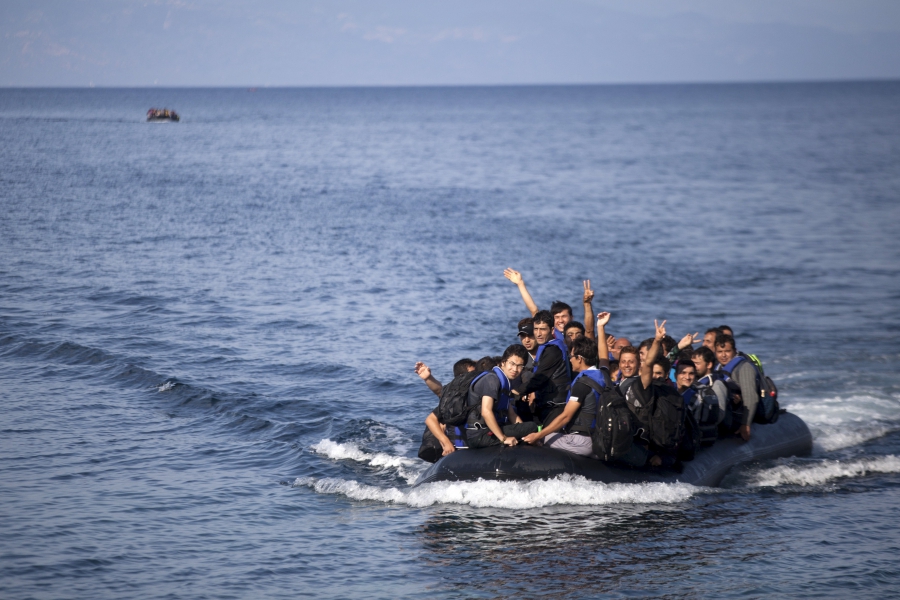 Refugees and migrants on a dinghy wave as they approach the shores of the Greek island of Lesbos.

The rush of refugees toward the European Union has been texted, Tweeted, Facebooked and Instagrammed. "It's sending a message home to villages all over the hemisphere," says the IOM's Joel Millman, "that the boat route to Europe is dangerous, it's risky, but, you know, 99 percent are getting through and they're finding a way to stay in Europe, so that's very attractive to people."

Syrians make up the largest current group of migrants, but not all Syrians are coming directly from their home country. Some come via refugee camps in the countries that border Syria.

"Many of the people would have wanted to go home, and probably expected to go home in the first few months of their evacuation, possibly into the first couple of years,"says Millman. "But now after so many years, reality has set in."

Millman says Syrians interviewed by the IOM are wary of their country's uncertain future and its ongoing civil war. "There does not seem to be a negotiated settlement in sight — in fact we're not even aware of any talks going on to bring this crisis to a close — so this has stimulated a kind of 'open the floodgates' kind of moment."

On the heels of Syrian migrants are refugees from sub-Saharan Africa, who have been making the perilous sea journey from Libya to Italy in increasing numbers, says Millman.

"The largest group coming to Italy so far this year — and it's up around 35,000, approaching last year's total — is from Eritrea," he says. "This is sub-Saharan, it's the Horn of Africa, it's considered a terribly oppressive state. There's a kind of open-ended indefinite military draft, so a lot of the people who are leaving are college-age who are afraid of being contracted into the army and never get out. They are number one. And right behind them would be Nigeria, a large country where there's been a lot of violence with Boko Haram."

Millman says that while the world has been slow to notice the large number of people fleeing economic hardship, persecution and open warfare, Western governments are finally getting the message.

"If you do not engage, you'll pay the price later. Because the people who are hurt by these conflicts don't intend to be ignored, and they will reach safety, and they will reach your doorsteps, and they will demand their benefits, their rights as human beings. And so I think Europeans have woken up to this — and so has the rest of the world — that this is an international emergency that has to be dealt with comprehensively."