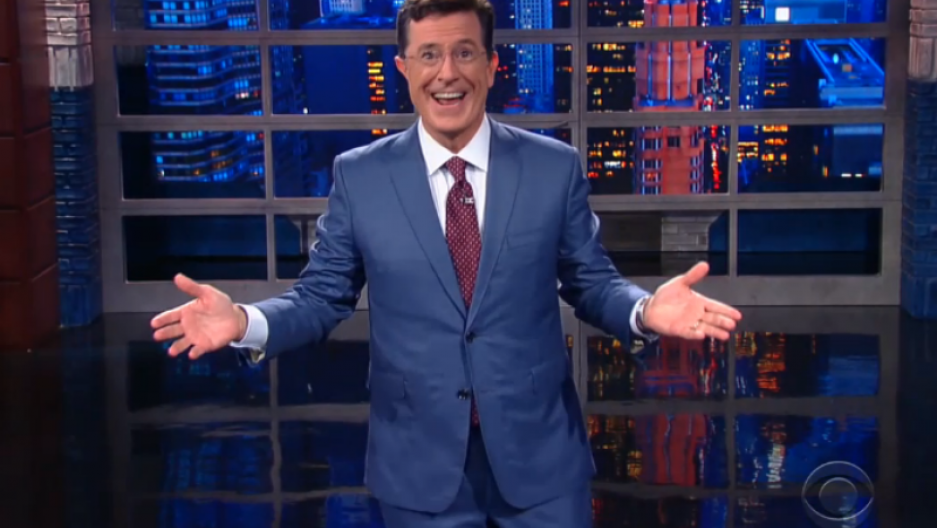 A lot of fuss has been made about the "real" Stephen Colbert, but the new host of the Late Show looked a lot like that right-wing pundit from theColbert Report during his debut last night. He kicked the show off with thenational anthem, the crowd chanted, "Stephen! Stephen!," he brought back thosefunny kicks, mocked presidential candidates, and interviewed a big deal celebrity. It all felt pretty familiar, but he hada sharper suit and a badassbacking band fronted by Jon Batiste.

I am very grateful to be a part of history tonight. 1 down, 201 to go! #LSSC pic.twitter.com/ueXRN6tj1J

Colbert explained the difference between the Emmy Award-winning Comedy Central character and the new guy to his second guest, Jeb!Bush:"I used to play a narcissistic conservative pundit," he said. "Now I'm just a narcissist."

The narcissist mostly played it safe during his debut, opening with a brief standing monologue before retreating to his comfort zone behind a brand new desk "carved out of a single piece of desk." He acknowledged his new digs and said hi to Jimmy Fallon via TV monitor before introducing his most daring bit of the night: a segment in which he is forced by an evilamulet to plug Sabra hummus. The audience didn't seem prepared for it, but it was one of the few moments Stephen distinguished himself from the Jimmys. After a commercial break, he laid into Trump:

The Late Showwith Stephen Colbert's best moments came when Colbert was being himself. During his marquee interview with George Clooney, he gave the actor a wedding gift that perfectly mocked their forced camaraderie:a paperweight with the inscription "I don't know you." It's hard to imagine either Kimmel or Fallon pulling such a stunt, but much easier to picture something similar happening on theColbert Report. For better or worse, it's easy to close your eyes and pretend nothing has changed. There's just twice as much show now.