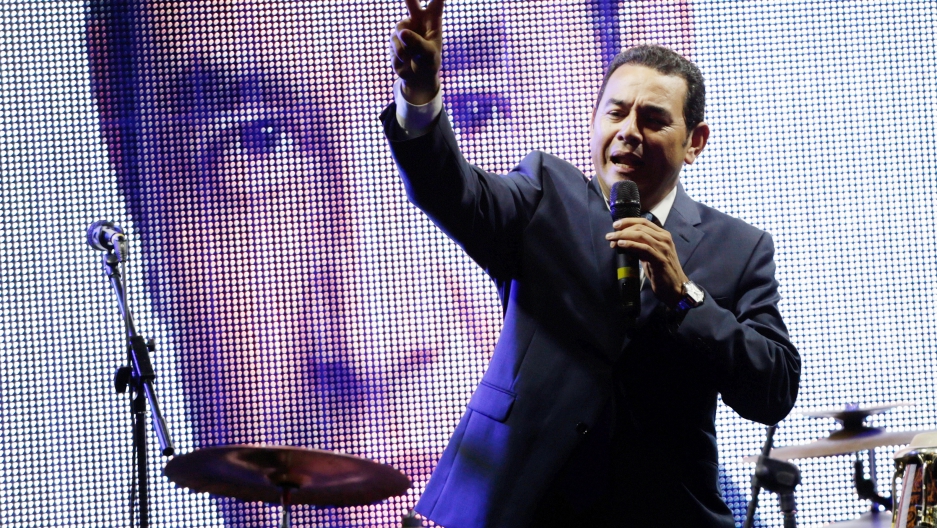 For many of Guatemala's indigenous, this is not good news.

If Morales really wants to change the country, he might want to reexamine his jokes, says human rights activist Andrea Ixchíu. "He's racist," she told PRI's The World before his weekend victory. "In his TV shows, as a comedian, he always makes fun of indigenous people, our customs and the way we speak. So I personally don't like him."

He may be an equal-opportunity offender. In one TV sketch, he donned blackface and used a prosthetic behind, prompting accusations of racism. He has also been criticized by women's groups for sexism and homophobia.

So how could a guy like this win a presidential election?

Ixchíu says he has the support of big media outlets in the country. "They started pointing at Jimmy Morales as a possibility," she says. "He started appearing in TV shows and in radio station talk shows. He portrayed himself as the salvation the Guatemalan needs."

Morales, 46, is an evangelical Protestant who opposes abortion and same-sex marriage. He called himself a common man and characterized the weekend balloting as a "brave vote, a vote full of hope, a vote which wants to put an end to corruption."

He said he was different and would be an agent of change from the country's unpopular and corrupt political elite. His campaign slogan was “Not corrupt, Not a Thief.” He ended up with more than double the votes of his main rival, ex-first lady Sandra Torres.

But Ixchíu and others look at him as the same old Guatemalan politician. She points out Morales has the support of the military.

And that’s the same military that abused its citizens during the Guatemalan civil war.