A public park in downtown Brussels houses a tent city with scores of families camping out in donated tents. Charity workers say they've never seen so many refugees occupy a public space at one time in Belgium.

A lot is being written about the refugee crisis hitting Europe. Thousands have been making their way through the Balkan countries, trying to reach wealthier countries in Western Europe.

Most refugees say they want to go to Germany, which is known for its low unemployment and liberal attitude toward the influx. But, for some, Germany is just a way station on the way to smaller countries, like Belgium.

In the capital, Brussels — which is also the headquarters of the European Union — the country is struggling to accommodate the thousands of Iraqis, Syrians and Africans that are showing up each day.

The Petit Chateau is an imposing brick compound, one of 16 centers where Belgium houses asylum seekers. Don’t let the name fool you: It's not at all luxurious. Suspected Nazi collaborators were held here after World War II.

Today, it’s the temporary home for asylum seekers like Abdul Aziz Kulmiye, a 29-year-old former television reporter who ran into some trouble in his hometown. 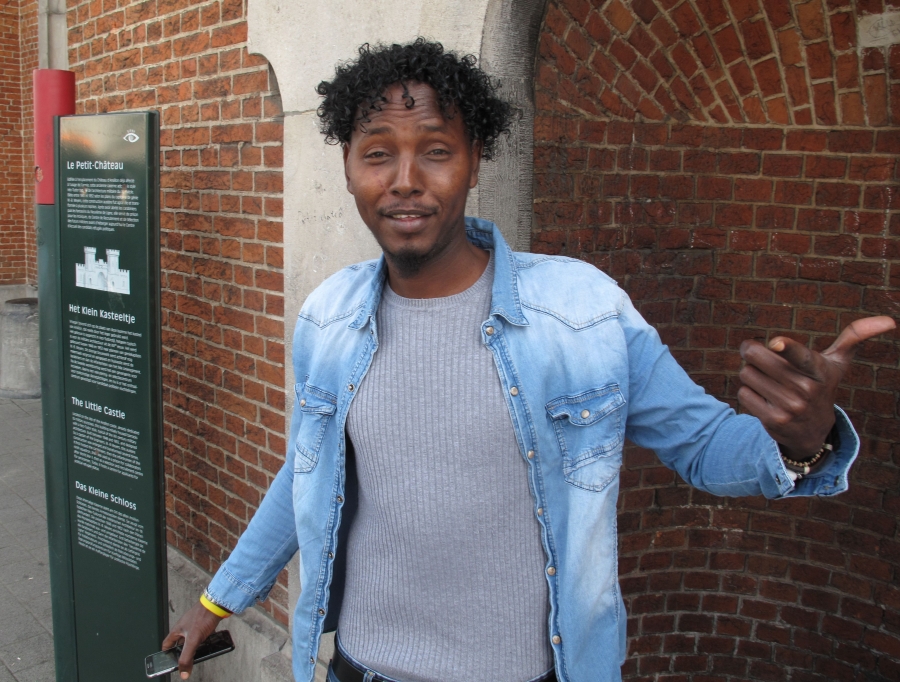 Somalian refugee Abdul Aziz Mohmand Kumilye, 29, says he had a burgeoning career as a television reporter until he was shot and wounded. The married father-of-four says he’s trying to get to the UK where he can use his English.

After working odd jobs in Saudi Arabia, he returned to Somalia last year, to start again. But the situation hadn’t improved and he didn’t feel safe.

This spring, Kulmiye set off for Europe. His first stop was Turkey and then over water to Greece. It was expensive to cross illegally.

He bristles at the idea that refugees like him have nothing more than the clothes on their backs and the road is treacherous.

“Every day you will pay. You don’t pay, you don’t leave,” Kulmiye said. “Anyone who says they don’t pay is a liar. You lose more money and sometimes they will take your money and you don’t see the guy.”

Those who claim refugees come to live off Europe’s generous welfare system don’t know anything, he adds. These are industrious people looking for a better life. And they’re willing to work hard for it, given the opportunity.

“The situation in Syria, all Syria is very dangerous. Rockets all day,” said 23-year-old Ziad from Damascus. He says he was about to be drafted into the Syrian army to fight in the civil war.

After his father lost his job, the family sold what they could to raise money to get him to Europe where he says he's just looking for security and a way to help his family.

“The first thing I am looking for is security, a good sleep, a good life,” Ziad said. “Then I don’t know, maybe I will complete my studies. If I can find the work in Belgium, I need work to help my family.”

At a park in central Brussels, less than two miles from the European Commission — where leaders are currently trying to forge a common solution to the crisis — hundreds of new arrivals are living in donated tents.

Across the street is a large government building. It’s where refugees go to make their case that deportation means death; that they have escaped war, oppression and violence to get here.

But they'll have to wait in line.

That’s why there are hundreds waiting to be processed here.

Charities are on the ground, and also ordinary people, some organized online, others even more spontaneously, have turned out to help people in this newly founded tent city in downtown Brussels.

Charlotte and Marijn, two stay-at-home moms from Brussels, say they saw the situation on the news and wanted to pitch in. Their homemade tomato soup (fresh, no canned tomatoes) was to make the refugees feel welcome and demonstrate that Europeans could band together to tackle the humanitarian crisis.

Charlotte and her friend Marijn, both stay-at-home-moms, proudly say they have seven children between them. This week, with the kids off to school, they made time to prepare homemade tomato soup to serve to homeless refugees.

Charlotte says the hot soup is a small, but important, gesture toward European solidarity.

Her point is well taken. The European Union has been so far unable to find a common solution to the influx of war refugees and migrants, the largest movement of people in Europe since the end of World War II.

This is in part because the word is out that Europe is an island of calm amid a world in chaos. And word travels fast.

A Belgian soldier, taking a shortcut through the park, is corralled by an Iraqi and his friend. The man snaps a quick picture of his grinning friend and the blushing Belgian officer.

The smartphone-wielding Iraqi’s fingers work quickly — the picture is posted online, and the message sent home is clear: Join us in Belgium, a welcoming place — where one can have their photo taken with non-threatening soldiers.