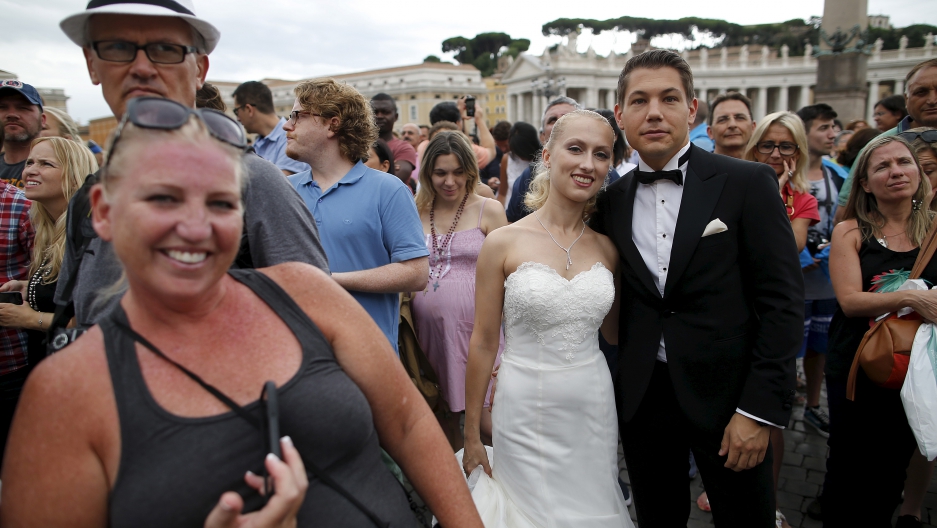 A newly wed couple attends as Pope Francis leads his Sunday Angelus prayer in Saint Peter's square at the Vatican in Rome on August 16, 2015.

For Roman Catholics, marriage is forever. It's a sacrament, "until death do us part."

Catholics in the US still get divorced at about the same rate as non-Catholics. But for those seeking to get remarried in the church, the process just got a bit easier.

Pope Francis has paved the way for divorced Catholics to go through the process of getting an annulment a lot faster. It will also be free of charge.

The Vatican, of course, still considers marriage to be a sacrament and it will maintain its ban on divorce. The way an annulment works is that it grants religious dispensation for someone who's been divorced and wants to get remarried. In essence, an annulment is a religious ruling that says the marriage was not valid in the first place, for one of several possible reasons.

"Therefore, the person can get married a second time," says Rev. Thomas Reese, a Jesuit priest and senior analyst with the National Catholic Reporter. "In fact, in the church's eyes, the person is getting married for the first time."

In the past, annulments were obtained through a tribunal process that required two levels of approval. That process can now be handled at the level of each archdiocese, with bishops having the responsibility to set up tribunals, who must be clergy, or act as judges themselves. Critics of the old rules long complained that the process could be time-consuming, frustrating and costly. The changes will go into effect in early December, out of "concern for the salvation of souls."

Recommendations to streamline the annulment process came from Catholic bishops who called for changes at a meeting last year in Rome. “A great number of synod fathers emphasized the need to make the procedure in cases of nullity more accessible and less time-consuming,” reads a final document produced from the meeting.

"[Pope Francis] wants the Church to be more like a field hospital, rather than a bureaucracy," Reese says. "A field hospital that gathers the wounded, binds the wounds, cares for people with compassion and love and sensitivity. And doesn't yell at people because they're wounded."