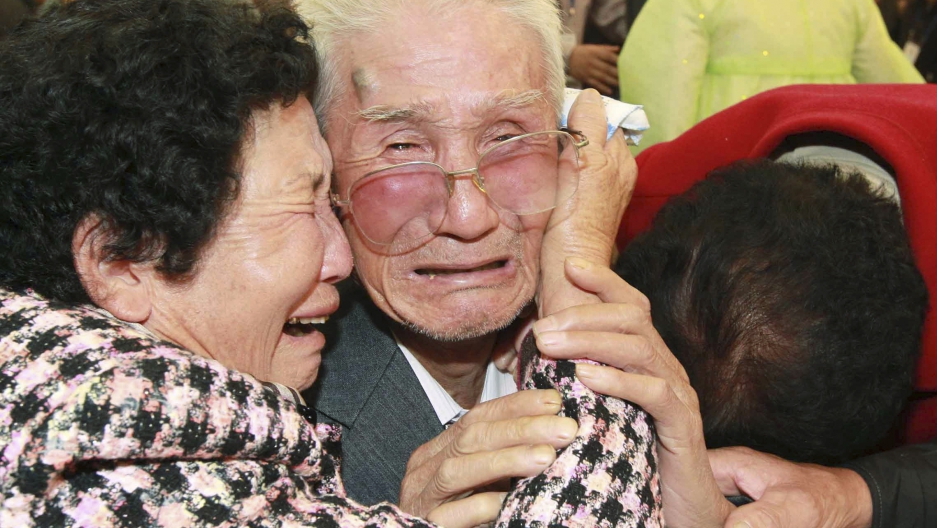 North Korean Kim Jin-Won (C), 80, cries as he bids farewell to his South Korean relatives after their inter-Korean temporary family reunions at Mount Kumgang resort November 1, 2010. 486 South Koreans and 97 North Koreans meet for the first time since they were separated by the 1950-53 war.

Families separated by the Korean War more than 60 years ago will have a chance to reunite again next month.

After marathon talks between the two countries, a deal was reached for selected families to meet between October 20 and October 26 at Mount Kumgang resort on North Korea's east coast.

This is a nice change of pace, says reporter Jason Strother. "This all occurred just a few weeks after the two Koreas ... were shooting at each other across the DMZ."

The families will be chosen by representatives of the Red Cross on both sides. Strother says roughly 66,000 South Koreans have applied but only 100 will be selected. To be chosen, families from both countries must be registered. "If a family in North Korea is also looking for their relatives in the South, then you have a match."

This is limited to first timers. "Those who have been involved in earlier reunions ... once they meet their relatives, that's it." Strother says both countries generally forbid any cross-border contact.

"There's no phone service, there's no postal service. Certainly no email service considering that North Koreans aren't even allowed to use the Internet. Those who've been separated from their families for six decades now, they really have no idea at all how those lost loved ones are."

An historic North-South meeting in 2000 opened the door for face-to-face family reunions. Roughly 15 meetings have taken place between separated families, but strained relations have often resulted in last minute cancellations. The October 20 reunion will be just the second in five years.

But that could also be jeopardized.

October 10 is the 70th anniversary of North Korea's ruling Workers' Party. Strother says there's speculation that the North will test fire a long-range missile under the guise of sending another satellite into space.

North Korea and South Korea are technically still at war because their conflict from 1950-53 ended in a truce and not a treaty.