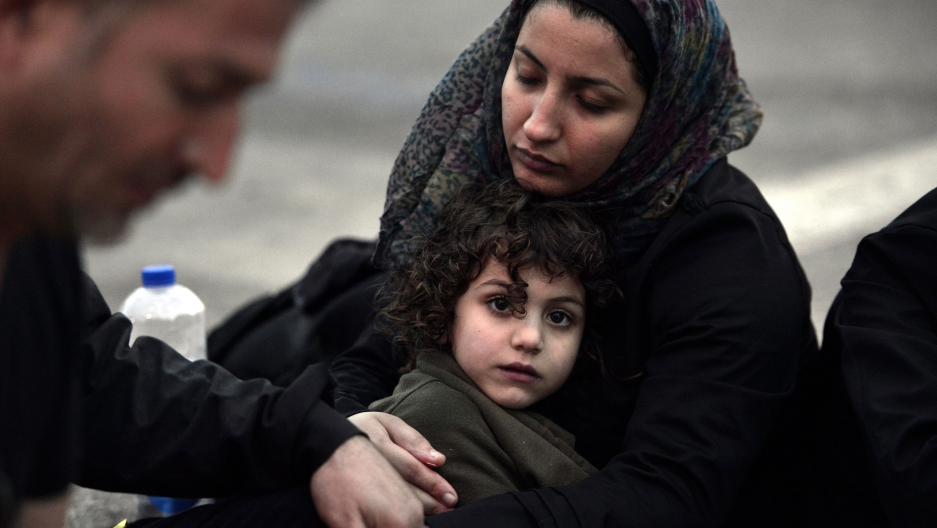 A Syrian mother tries to warm up her daugter after they arrived on the island of Lesbos, early on June 18, 2015. Some 48,000 migrants and refugees have landed on Greek shores so far this year, compared to 34,000 arrivals during all of 2014.
Credit: LOUISA GOULIAMAKI
Share

What’s German for “Give me your tired, your poor, your huddled masses yearning to breathe free”? The way things are going, we might just have to stick a Fraulein Liberty in Hamburg harbor. Germany has announced that, while other European states are closing the doors, for the next several years it can take in at least half a million refugees a year — “maybe more,” according to vice chancellor Sigmar Gabriel.

Germany expects to offer some 800,000 people refuge this year alone, quadruple the number it received in 2014. That sounds like an awful lot. So it’s worth remembering what an awful lot just one family might have been through. Among that 800,000 is Laith Majid, the Syrian man so memorably pictured weepingas he reached the Greek island of Kos by sea, his seven-year-old daughter clutched in his arms. Majid, his daughter, his wife and their three sons are now in a temporary shelter in Berlin. The latest pictures of them look very different from the one that brought them to the world’s attention in the first place.

Meanwhile, on other Greek islands, other migrants — some 30,000 of them — are hoping they’ll make it somewhere else, too. On Lesbos, where more than 15,000 people are stranded, authorities warn that the island is “on the verge of an explosion”. If the scenes of coastguards and riot police herding crowds of people attempting to board the first board to the mainland are “the verge,” we’d hate to see that explosion.

Europe’s southernmost countries can’t take in every refugee that lands on their shores, nor can Germany house all those who head north. With several other EU states doing their darnedest to keep their lips and borders tight, a mandatory refugee quota is looking more and more likely. European Commission chiefs are expected to sketch out what that might look like after talks tomorrow.

Here’s a statistic that might surprise you: 41 percent of Iran's population is under 25. Here’s another: over half of those aged between 18 and 24 attend some form of higher education. And yet another: 45 percent of all Iranians go online.

Picture all those young, educated, internet-savvy people and it won’t surprise you that Iranian youth are some of the Vienna nuclear deal’s biggest fans. The historic agreement, signed in July and and awaiting the approval of US Congress, requires Iran to cut its production of nuclear material and allow inspections of nuclear facilities in exchange for the UN lifting economic sanctions. It might just work. And it might just change young Iranians’ lives.

“We were alone and at war with the world”: that’s how one 20-something Tehrani puts it. In the latest report from Reese Erlich for the GroundTruth Project, we hear from a new generation of Iranians who are ready not to be alone or at war — ready, perhaps, for a new Iran.

Question: Who or what is to blame for India’s rape problem?

We should give a special mention to the guy who said chowing down on chow mein — yes, fried noodles — was responsible for the “hormonal imbalance” that causes attackers to force non-consensual sex, which has to be the single most niche excuse we’ve ever heard. A regretfully non-special mention goes to the several guys who blame rape on women, which has to be the least niche excuse we’ve ever heard — many, oh so many, times.

What else, as per Indian authorities, has rape got to do with? Find out here.