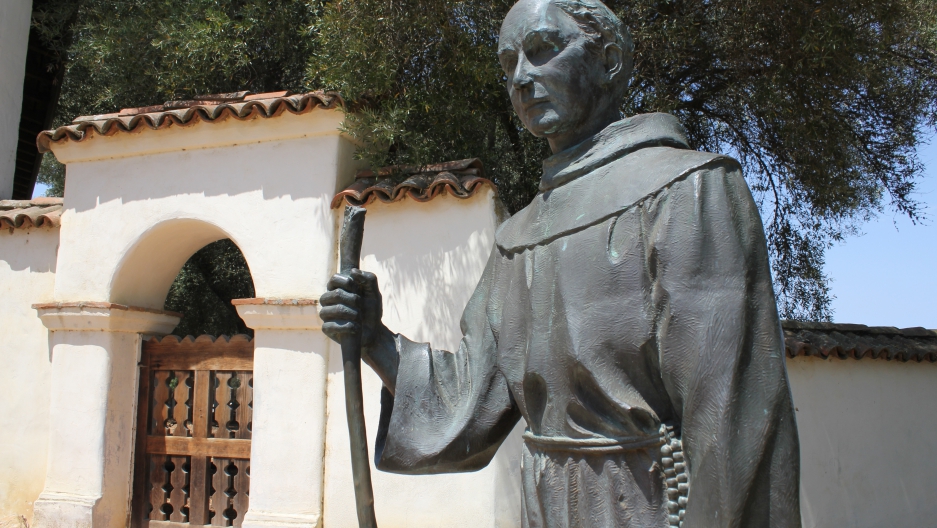 Some call him the Father of California.

“He was 5-foot-2 with eyes of blue,” says Andrew Galvan, the curator at Mission Dolores in San Francisco’s Mission District, looking at a statue of Rev. Junípero Serra. “He’s wearing the Franciscan robe, with the Franciscan cord and a rosary, with sandals on his feet.”

The mission, a popular tourist spot, is known for a few things: being one of the oldest structures in the city, for its appearance in Alfred Hitchcock’s “Vertigo" — and for being mission number 7 of 21 in California. They run up the coast and were established by Spanish missionaries who came here in the 18-century. Serra led that movement. On September 23 in Washington DC, Pope Francis will canonize Serra for his work, for being, as the pope calls him, the great "evangelizer of the West," for bringing Catholicism to Native Americans here.

That's where things get complicated.

"I hear people saying, 'Oh, he loved the Indians.' I don’t think so," says Louise Miranda Ramirez, tribal chairwoman for the Ohlone Costanoan-Esselen Nation, based in Monterey, California. "His goal was to remove our culture. You have to beat ‘em, torture ‘em, remove them from their homeland."

She says Serra’s goal to convert Native Americans involved violence, enforced by the Spanish military. Indians were enslaved to build the missions, corralled in tight quarters, contracting fatal diseases. They were whipped if they disobeyed. There are many biographies of Serra, but Elias Castillo's "A Cross of Thorns" offers the most searing account of Serra and the mission's well-documented dark past.

Ramirez has studied this history. She is horrified that "nobody holds Serra responsible for the crimes against my people, against California's Indians."

The process for making Serra a saint goes back to Pope John Paul II, who beatified Serra in 1988. But Pope Francis, the first Hispanic pope, has moved that process along. Serra will become the first Hispanic saint in the US. Archbishop Jose Gomez, the highest-ranking Hispanic bishop in the US, has called Serra's canonization a "historic moment in the life of the Hispanic people."

Father Thomas Reese, a Jesuit priest and senior analyst with the National Catholic Reporter, says Hispanics have become a larger part of the US Catholic population. "I personally would have preferred that the canonization be postponed in order to have the kind of dialogue and conversation with native peoples that people are encouraging," Reese says.

Native Americans throughout California are protesting Serra’s canonization. Valentin Lopez has led protests at mission San Juan Bautista, about a two-hour drive south of San Francisco. Like other missions, it is white adobe, with a tiled roof, and this mission has a beautiful green stretch of lettuce fields behind it.

Lopez, with the local Amah Mutsun tribe, has written Pope Francis asking him not to make Serra a saint. "We've asked him to work with our tribal members to begin a healing process. And we have not heard back from him."

Lopez looks at a small, unkempt cemetery at the back of the mission. Thousands of Indians are buried here. 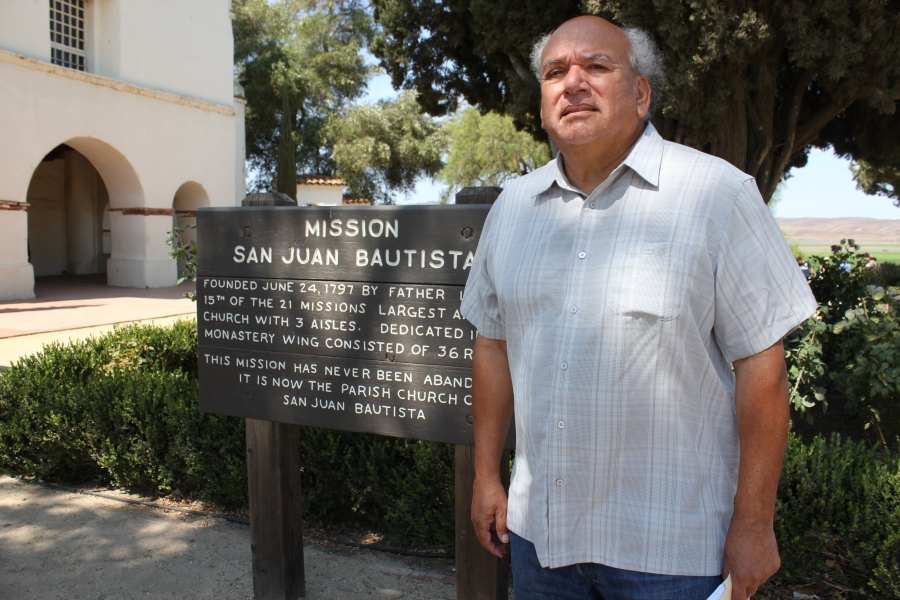 "They are unmarked graves," says Lopez. "This central part of California, right now where we’re at, was the most populated part of Indians north of Mexico City."

Father Scott McCarthy, a priest at Mission San Juan Bautista, says that he understands the anger some Indians feel toward the Vatican's decision. But he also says that saints are "not perfect" and should not be seen that way. "The pope saw him as a person who reached out beyond his own life to bring something of value to others," says McCarthy. "He had a good heart and he wanted to do the right thing. Some of his practices would be totally outdated and not what we’d want."

What a lot of people on all sides say is that the missions could tell a fuller history — of Serra, too — and how Native Americans were treated. 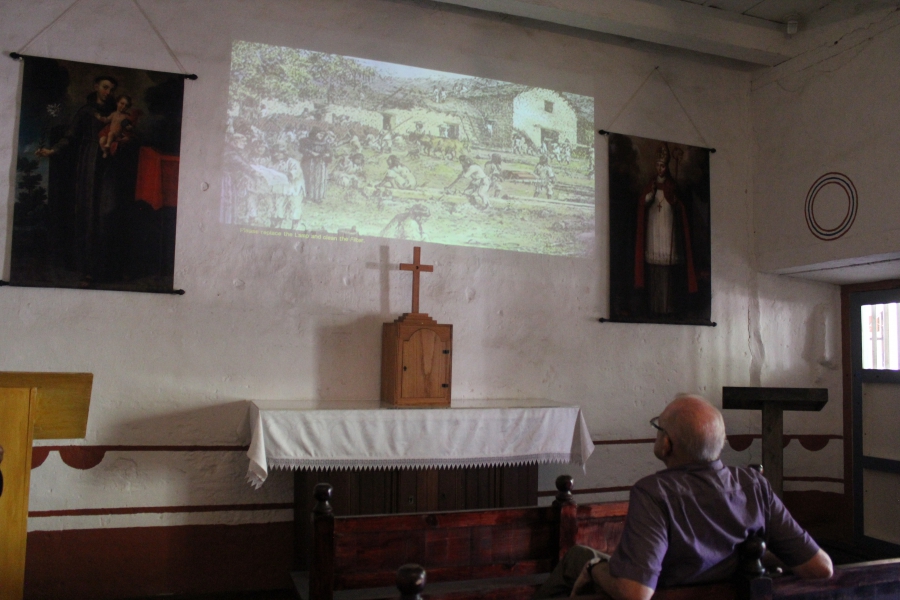 A short film at California's Mission San Juan Bautista reviews the history of the mission, but does not mention the documented abuses that Indians endured while the mission were being established at the hands of the Spanish military.

Andrew Galvan, the curator at the mission in San Francisco, is pushing for this. He also claims Indian heritage. "In many California missions, you don’t hear natives peoples’ stories told," he says. Galvan is trying to change that, though, by giving tours that include the Indians’ stories — and so is his younger cousin, Vincent Medina. 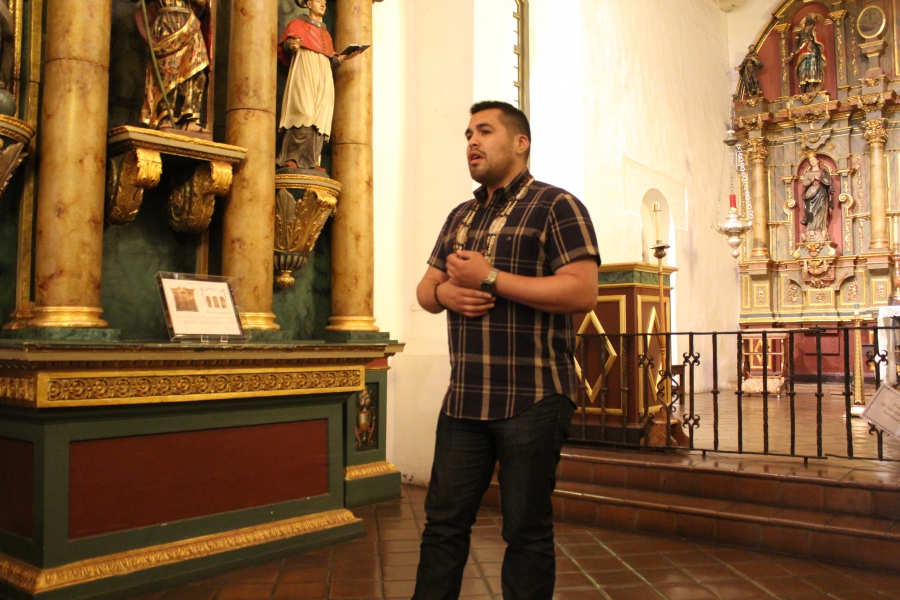 Vincent Medina, 28, is a curator at Mission Dolores in San Francisco. He is Catholic and also Indian. His ancestors are buried at the mission, and he includes their stories in his tours.

They join more than 5,000 Native Americans buried at this mission, just barely recognized by two gravestones created by the cousins.

And both cousins are going to the Catholic Mass for the canonization of Serra in Washington — even though the younger one, Medina, is against it. 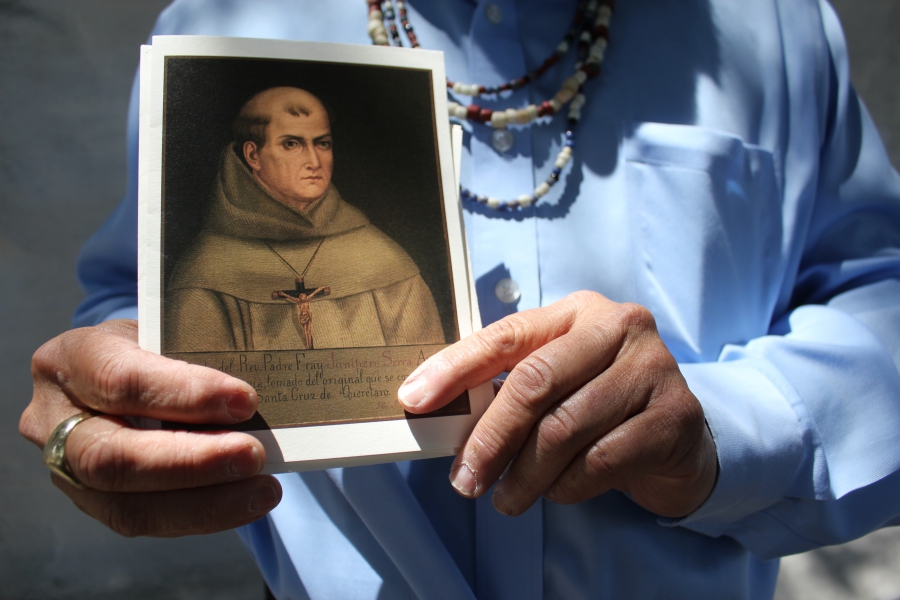 Andrew Galvan, the curator at San Francisco’s Mission Dolores, holds the invitation to the canonization of Rev. Junípero Serra, to be led by Pope Francis in Washington, DC, on September 23.

"But I also know that I love Pope Francis," says Medina.

Maybe, Medina hopes, Pope Francis will talk about this, too.