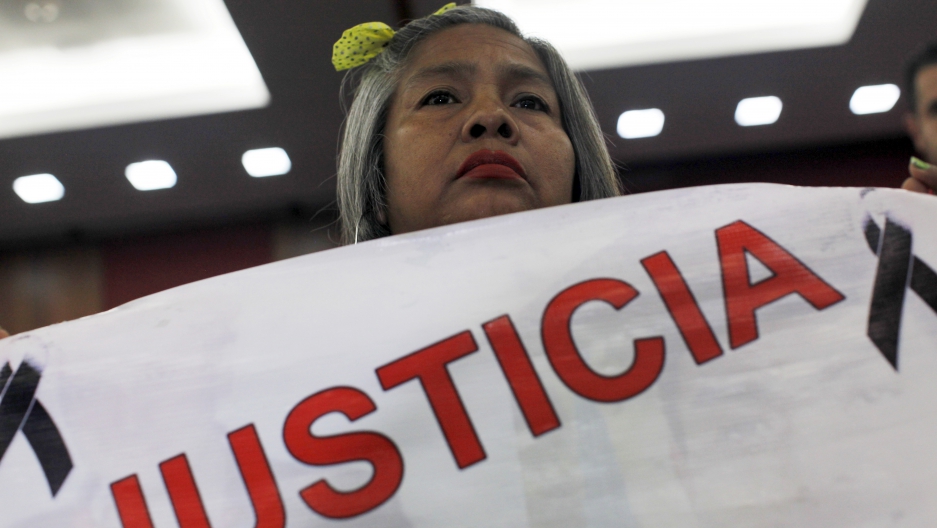 Berta Nava is the mother of Julio Cesar Nava, one of the 43 missing students from the Ayotzinapa teachers' training college. She holds a sign reading, "justice." An international team of experts cites flaws in the Mexican government's account of the missing students.

A team of human rights experts is disputing the Mexican government's official account of the disappearance of 43 student teachers last September.

Mexican officials say the group were killed and burned at a dump site by gang members. The independent experts were appointed by the Inter-American Human Rights Commission to find out what really happened to the missing students.

"[Their report] basically said the government had got it wrong," says Deborah Bonello, a reporter based in Mexico City.

The government's version of events is that the students had commandeered several buses to get them to an anti-discrimination protest in a neighbouring town of Iguala. Mexica officials say the students were mistaken for drug traffickers and rounded up by local police who then turned the students over to a drug gang who burned the students at a trash dump.

But the report, says Bonello, found there was no scientific evidence that a fire of that scale could occur. Their conclusion was based on forensic analysis that "to burn that many bodies, the fire would have had to burn for such a long time with such intensity."

It was a bittersweet vindication for the parents who've accused authorities of not being truthful about the events of that night.

And that, says Bonello, has been one of the biggest challenges for Mexican President Enrique Pena Nieto. Now going on a year later, there's nothing in the report to indicate what really happened to the victims.