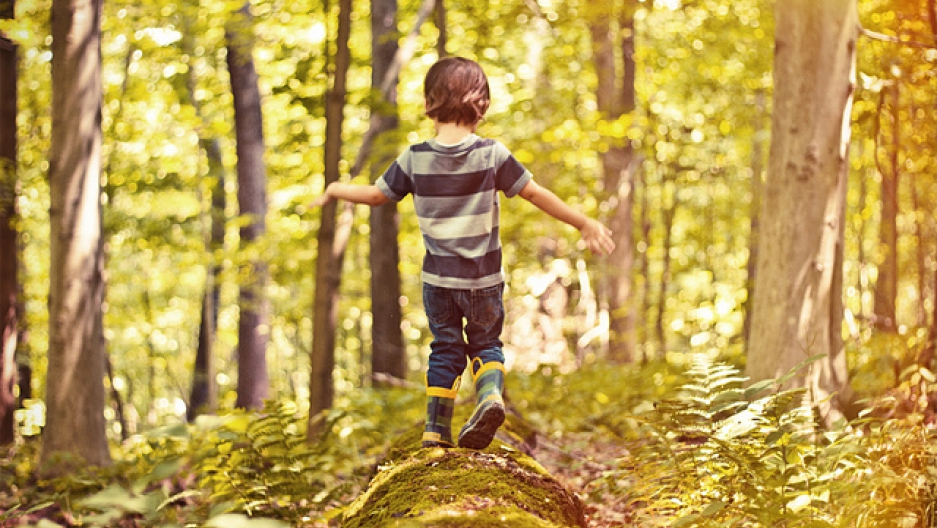 A kid plays in the woods.

Kids are hard-wired to learn, and before they reach kindergarten, they’ve figured out a lot: How to walk, how to eat, even how to speak a language.

They learn to do these things with no formal lessons; just observation, practice and support from others.

Psychologist Peter Gray, author of the book “Free to Learn," says our instinctual desire to learn has served humanity well. But, that instinct is being smothered by our modern education system, filled with curricula, tests and grades.

Why Play Is Important

Gray has a radical solution to the problem: Just let kids play.

“They see what the skills are that you have to learn to be successful in your culture and they practice those skills; not because anybody is making them do it, but because it's human nature to want to become good at what you see are the important skills around you in the world,” he explains.

In an age when information is just a click or tap away, learning facts and figures is much less important than learning social skills, says Gray.

“We need more people who know how to solve the problems of life. These are not things that can be taught in school. ... These are things you have to learn through experience. Where do children get that experience? They get it in play, where there’s no adult solving their problems for them.”

Gray believes that children have less time to play freely than they did in decades past, and he argues that has caused increases in anxiety disorders, depression and narcissism among children.

A School Without Structure

The kind of school Gray envisions can be found at the Sudbury Valley School in Framingham, Massachusetts. The students there follow no curriculum. They don’t take tests or get grades. “Staff members” play the role of teachers, though they’re in a support role, not leading classes.

"This is a school really and truly where children are free to play and explore and follow their own interests all day long,” Gray notes. “There's lots of opportunities to use the tools of the culture. So, this in a certain sense, is the equivalent of a hunter-gatherer band for children today."

What do the students at Sudbury actually do all day if there are no classes? “They're playing basketball and riding bikes and reading books,” said Mimsy Sadofsky, one of the founders of the school in an interview in 2000. “They're talking about what they did over the weekend, talking about political issues, talking about anything that might come up in a conversation between two people. They're meeting new people, swinging, eating. Almost anything you can imagine people doing in a large family –— in a really large family because we have 210 kids — they're doing here today.”

One key to the Sudbury model, says Gray, is that the students play with kids of different ages. They learn how to get along with students different from themselves. And, he says older students serve as models for younger students.

Gray sent his own son to Sudbury Valley after he struggled with the structure of public school. But, Gray wasn’t sure how well Sudbury Valley would prepare his son for a job and the real world. So, he put together a study to find out. Turns out, graduates of the school do pretty well.

"Quite a number of them, more than half of them, had gone on to college at a time when about half of the general population from that socioeconomic group was going to college,” he explains.

And, he says they do OK in college, despite not having taken the same courses as the other students in their classes. Gray thinks he knows why:

“Nobody was telling [the Sudbury Valley students] that college was where you're supposed to go. They, after all, were from families that weren't pushing them through the regular school. They're not pushing them into college either. They're going to college because they have made a decision to go to college and they are used to being in a situation where they're taking responsibility for themselves."