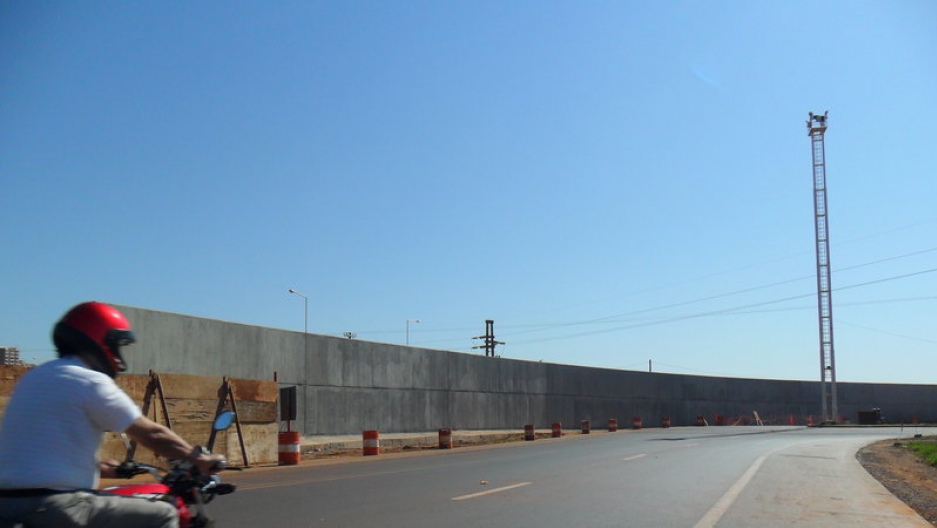 Donald Trump might think that border walls are a great idea, but try telling that to the South American neighbors currently split apart by one.

In recent months, residents from the leafy Paraguayan town of Encarnacion and its equally verdant Argentine neighbor Posadas have found themselves divided by a stark concrete wall, measuring 15 feet high and nearly a mile long.

They’re not happy about it.

In fact, they’re so mad that nearly 7,000 of them have already signed this Change.org petition started by a Posadas man demanding to have the structure torn down.

The wall was built by the Yacyreta company, which runs a huge bi-national hydroelectric dam of the same name. The principal purpose of the wall, which protects a new customs center, is to stop the flow of contraband goods, including drugs. Yacyreta claims it was required to put up the barrier under the terms of Mercosur, a trade pact that unites Paraguay, Argentina and neighboring countries.

Carlos Freaza, Yacyreta’s head of operations, has said that the wall will be accompanied by new parks and “green spaces.”

But that’s not placating locals, who say the wall impedes important flows of students, tourists, and trade. The petition text describes the structure as “shameful” and as appearing to have come from the playbook of the “reactionary ultra-rightwing” Trump, the surprise frontrunner in the US Republican presidential primary.

It adds that the wall is a “horrible” eyesore on the banks of the Parana River that is otherwise “an example of natural beauty.”

The text implies that the South American wall may have something else in common with the brash New York real estate mogul's grandiose plan: It won’t work.

Critics have warned that Trump’s wall would be an outdated response to the 21st-century problem of illegal migration, with many Mexicans and Central Americans desperate to reach the United States likely to find ways over, around and under the wall, while millions of others enter on legal visas but overstay them.

The South American petition text concludes similarly: “They wall up the most important entry point in the province … while they fail to take care of hundreds of border points where drugs and contraband cross in bulk.”