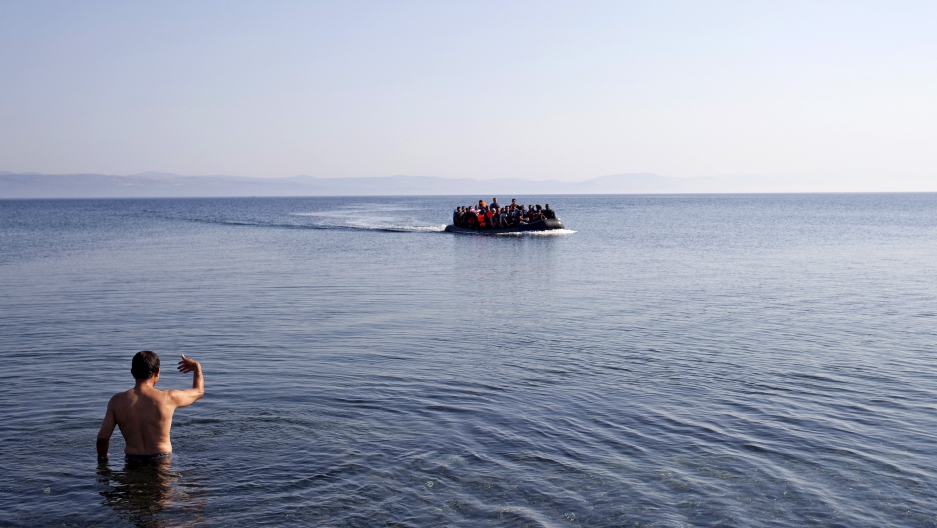 A local man gestures to Syrian refugees on a dinghy approaching the shores of the Greek island of Lesbos, September 4, 2015.

The United States is committed to doing more to help with the Syrian refugee crisis, amid criticism that it’s not doing enough.

“Let’s be very clear, we’ve seen some heartbreaking images,” says Mark Toner, the deputy spokesman for the State Department. “Certainly what we’ve seen in Hungary, but the image of the child in Turkey washed up on the beach, to any parent, and frankly to anyone, are heartbreaking.”

“It speaks to the urgency of the situation,” he adds. “We’re doing a lot. Do we need to do more? Yes, and we’re looking at how we can ramp up our efforts. Certainly, the longer term goal here is that we need a resolution to the conflict in Syria, within Syria. We need a credible peace process.”

However, the United States has not admitted many refugees since the war began. Toner says 1,500 to 1,800 will have been admitted by the end of October. A non-profit advocacy organization, Refugees International, estimates the figure is currently under 1,000.

But the scale of the problem is immense. The US Agency for International Development estimates 4 million Syrians have fled the country since the war began, and 7.6 million more have been displaced from their homes within the country. That adds up to about half the population of Syria.

"It’s a huge situation right now," says Toner. "Certainly we're watching as it unfolds in Europe. But we’ve already put more resources into accepting refugees for permanent asylum in the United States, and resettling them here, and we’ve actually upped our numbers on that front.”

Toner says the US has received 17,000 referrals from the UN High Commissioner for Refugees. “But one of the problems in any of these kinds of processes is that they have to undergo a fairly stringent security check. That’s an important element of it. But that can take time. That’s a long process, sometimes 12 to even 18 months.”

Toner says the US is trying to expedite the response. “What’s also important here is what we are doing in terms of humanitarian assistance. And the US is the largest donor. We’ve put almost $4.5 billion to assistance of refugees, both within Syria and outside, in places like Turkey and Jordan and elsewhere.”