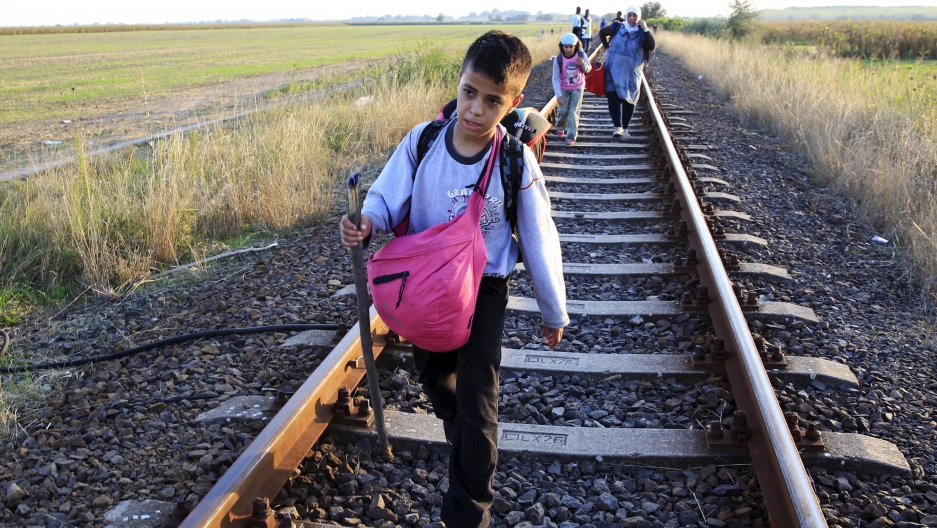 A migrant boy walks on a railway track after he crossed the Hungarian-Serbian border near Roszke, Hungary.

A box of Winston cigarettes, a yellow plastic bag, tape, a lemon, a laser pointer, bandages, dates, a government booklet, documents for his family, sunscreen, painkillers, changes of clothes and a lifejacket.

These are the items that Syrian refugee Abu Jana had in his bag when he crossed the Mediterranean from Egypt to Greece.

Photojournalist Sima Diab recently looked inside Jana's bag, as well as the bags of three other Syrian refugees on the journey across the Mediterranean from Egypt to Europe for The Guardian.

Abu Jana was a little more prepared then most, says Diab. Taking a laser pointer, for example, was one item that surprised her.

Passport, lifejacket, lemons: what Syrians pack for the journey to Europe. By me & @SimaDiab http://t.co/3Gc8ajag0w pic.twitter.com/yGaSYDtIIL

Lights are not an option for smugglers trying to cross the Mediterranean illegally through the night. Lights only draw unwanted attention.

“But if something goes wrong, that’s exactly what you want to do. The idea that he would take a laser point for anybody to see miles around is a really profound thing,” Diab says.

Abu Jana is an ex-Army officer from Syria.

“He didn’t want to partake in what he considered a government crack-down of protestors. So he decided to leave Syria in effect defecting from the Army,” Diab explains.

Lemons were a common item that Diab saw in the refugee’s packs. Abu Jana was advised to take lemons on his journey as a natural cure for seasickness. They also serve to rehydrate during what could be a 10-day journey across the sea.

“First I thought, well why don’t [the refugees] take anti-nausea pills, and then I realized that they might not even have water. That was an incredible realization that it could get that desperate,” Diab adds.

Most of the items that Diab documented are the very basics that people need to survive — just enough to fit into a small backpack.

Diab asked several refugees why they didn’t take any sentimental objects like pictures. There isn’t room she was told.