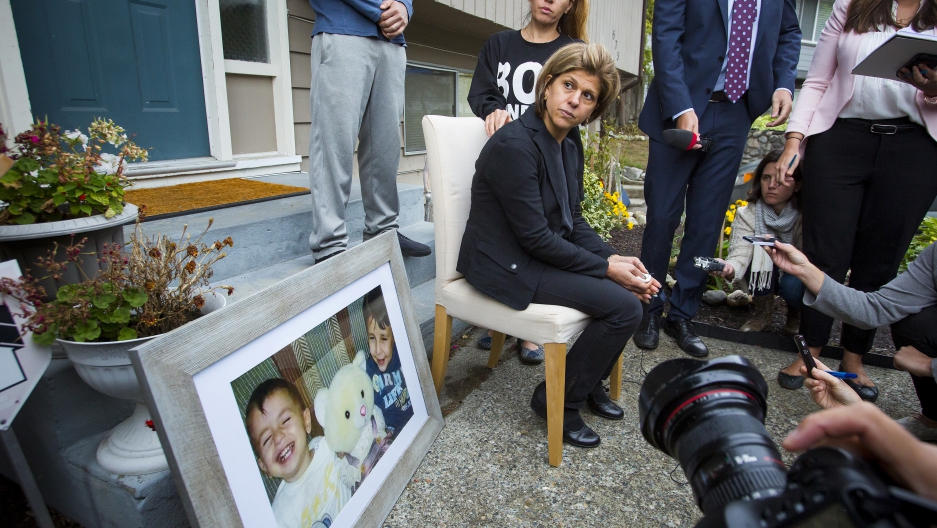 Tima Kurdi, sister of Syrian refugee Abdullah Kurdi, whose sons Alan and Galip and wife Rehan were among 12 people who drowned in Turkey trying to reach Greece, cries while speaking to the media outside her home in British Columbia.

The world this week saw the picture of a three-year-old his aunt identifies as Alan Kurdi, lying dead on a beach. He and his family were trying to get from Syria to Europe when their overcrowded boat overturned in high waves.

The family was from Kobane, the town in northern Syria that was besieged by ISIS earlier this year.

Tima Kurdi, Alan's aunt, lives in Vancouver and had apparently been trying to help her brother and his family get there.

She told Canadian TV what it was like when she visited her brother last year in Turkey.

"It changed my whole life," she said. "It was a really bad situation. I helped them rent a place, empty, no furniture no nothing."

If Canada's Prime Minister Stephen Harper has his way, trips like Tima Kurdi made last year could be very problematic. Recently, Harper promised that if re-elected, he would make it a crime to travel to certain areas controlled by terrorists — with some exceptions.

Samir Salloum worries that he could very well be seen as a terrorist.

When his father died in April, his remaining family in Latakia, Syria, asked him to come back for the funeral. But Salloum, who has lived in Canada for the last 21 years, and lives now in Montreal, didn't go.

“I'm not afraid to go there in Latakia,” he said, "because it’s relatively peaceful right now. But I’m afraid when I come back here they ask me, ‘why [do] you go there?’ [A] million questions so I may not be able to prove where I was.”

Salloum, a Syrian Christian sitting in the basement of his church in Montreal after taking his daughters to services, is a pretty unlikely ISIS recruit. But he worried about the trip leaving a question mark for law enforcement, which could affect his job in telecom.

And it could get more serious. The proposed travel ban would likely target regions controlled by ISIS, which holds parts of northern Iraq and Syria.

“We are talking about the most dangerous places on earth,” Harper announced. “Where governance is non-existent and violence is widespread and brutal. There are very few legitimate reasons; those who go without legit reasons will face full the full force of the law.”

The concern here — like in other countries — is about Canadians leaving to join ISIS. There have been at least 50 who have left the country so far, according to one expert, including some from Montreal.

Counterterror professionals say that the idea behind a travel ban is that it may be easier to prove someone traveled to a certain place than to prosecute someone for terrorist activities overseas; but they still question whether the mandate can be enforced.

There are more than 22,000 Syrian immigrants in Canada, almost half of them in the province of Quebec. And Afra Jalabi says they have many personal reasons to visit their home country.

“It would be so short-sighted to think that you could create a law that would deal with the complexity of traveling to Syria,” she says.

Jalabi’s is another Syrian ex-pat and activist living in Montreal.  She doesn’t trust the Canadian government to identify what is or isn’t a “legitimate reason” for visiting Syria.

She says pretty much all people traveling to dangerous parts of Syria keep a low profile — for their own safety. And she worries all those people will seem suspicious.

“If you're going to start sorting between all these people: the formal and non-formal and the journalists and the aid workers and the human rights and the visitors, I mean that's a huge process and you can't do it really," Jalabi says. "On top of that, to criminalize anybody going there, that's just a sweeping generalization and you’re basically isolating the Syrian people further.”

Australia enacted a law like this in 2014 and is currently pursuing its first prosecution against a nurse named Adam Brookman. He claims he was driven across rebel lines when he himself was hospitalized and then conscripted by ISIS.

So things can certainly get complicated.

Saloum  agrees that the Canadian government’s concern is genuine.

“My other country, Canada, has to be protected too,” he notes, but wants to know how the government would institute the proposed travel ban fairly.

“We have to distinguish between the people, they go there just to go with ISIS — or the people they go to see their family or for legal reason. So we have to pay attention to this to know who is going there, why is going there and prove this.”

It’s not easy, he says. But nothing is with a war like this. A representative of Harper's campaign said that the legitimate reasons would be laid out in the regulation. And he said the government would review each traveler individually.