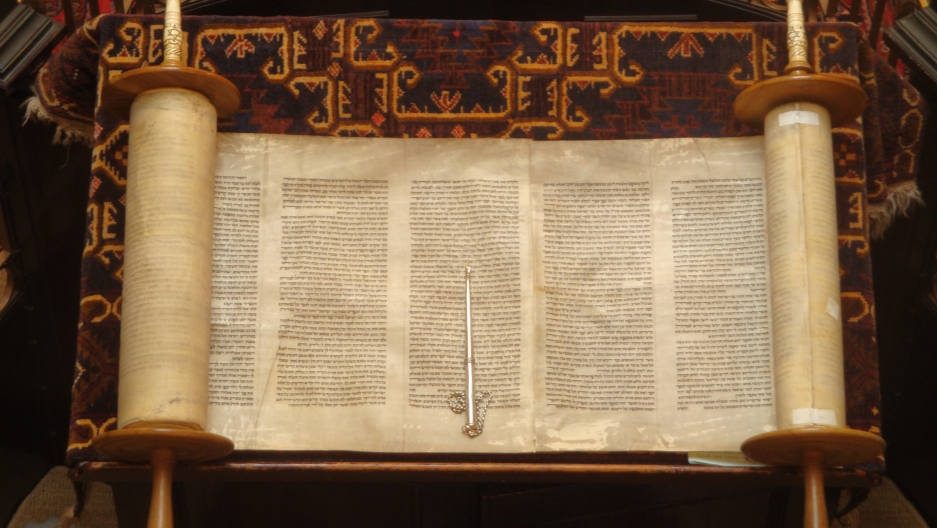 Growing up in Harrison, New York, 10 minutes outside the Bronx, everyone I knew was Italian, Jewish or both.

Mine was a pretty secular home, run by an Italian-Catholic mother and a Canadian-Jewish father. We had a Christmas tree and a menorah. I ate chicken scarpariello and bagels and lox. I had an Italian grandfather with shiny veneers and a pinky ring and a Jewish grandmother with an awesome kugel recipe and a stack of haggadot. I wouldn’t go as far as to say that I was proud of my interfaith heritage, though — I was almost completely unaware of it.

I went to a Jewish preschool, but when I was a sophomore in high school, I took a World Religions class — it mandated a trip to a house of worship outside each student’s circle of familiarity. I chose a tiny white Episcopal church, across from a park I’d played at as a child.

My first trip to church was on Pentecost, so the church had hired a quartet of sharply dressed old men, all with very white hair, to play horn instruments. I was ecstatic. I loved church! I returned the next week only to be deeply disappointed by the lack of big band jazz standards. I was also uncomfortable with the discussion of Jesus dying for my sins.

I articulated my confusion to a friend. I liked the idea of church, but there were some things that irked me. She stated what should have been obvious: I believed in one almighty Old Testament God? Heaven and not hell? An intentional omission of Jesus Christ? Judaism was my answer, though I didn’t really understand it until later. That is, until I went to Catholic school.

And, 30 years later, she told me this story, bearing wounds that clearly still stung. I, the ever-thoughtful and understanding teenaged daughter, pried my non-refundable enrollment deposit from her clenched hands, patted myself on the back, and bought myself a BC sweatshirt.

I immediately loved it. I met a great group of girls in my hall. I discovered dining hall cuisine and gained 15 pounds. College was my oyster, and any spiritual discomfort I felt was minor. I knew I’d signed up for Catholic school, and Catholicism is what I got.

I felt a nagging embarrassment after declining an invitation to mass with a nice girl from my hall. I profusely apologized after offending a classmate when I said our professor was “literally the devil.” I warned visiting friends about the presence of a crucifix in each class.

I didn’t realize what exactly I lacked until the student activities fair, where I walked through the booths, dodging small, bouncy circles of a cappella singers.

After spotting a BC Hillel banner and dreidel-shaped erasers, leaving my friend’s side with a distracted “I’ll be right back,” I signed my name on a white piece of paper inviting me to join the email listserv. I went to Shabbat dinner on that Friday night and I didn’t stop going for three years.

They were as desperate for me as I was for them — a motley crew of Jew-ish people like myself who couldn’t articulate that not having half your school take off for Yom Kippur felt strange. That bar and bat mitzvahs every weekend in middle school were the backdrops for a series of firsts: first glimpses at adulthood, first kisses, first sips of alcohol. No one else around us understood that JAP was an insult that didn’t have anything to do with being Japanese and instead had everything to do with Juicy Couture. Thus, I became the token Jew.

A half-Jewish, half-Italian kid from the tri-state area, a once utterly unremarkable mix, suddenly a poster child for a religion I formerly didn’t know I was. I ran for the Hillel executive board and became the freshman representative, then vice president. I started to read Jewish literature and restrict my use of electronics on Shabbat. I stopped eating pork and shellfish. I had a bat mitzvah. I went on a Birthright trip to Israel. I felt at home at Hillel, which I never anticipated, and I got tired of explaining myself to my friends.

Part of me wonders if I would have thrown myself into Judaism with so much enthusiasm if I were at a secular school. Spirituality is a constant hum of white noise at BC, and I needed something to put there while everyone else was at 10:30 mass. What I found was Judaism, a force that had been present like groundwater my entire life, but one that I hadn’t broken the surface of until I’d gone somewhere where it was unique.

On New Year’s Eve this winter, I drank too much champagne at a Brazilian restaurant with my parents and my older sister. During a break in the dance party, I asked my dad what he thought about me being Jewish. Was he proud of me? Why didn’t he and my mom want to raise us decidedly Jewish? Or Catholic, for that matter? My head hurt. Was it the champagne? Or the existential crisis?

By the time he got married and had children, he wasn’t a very traditionally observant Jew. He was eating bacon cheeseburgers, and wasn’t lighting candles on Shabbat, and he explained that it felt hypocritical to assign a religion to my sister and I when it wasn’t a part of his or my mom’s lives. He didn’t have a choice growing up. Neither did my mother. They got married, and it really didn’t matter to them whether we were Ashkenazi Jews or Italian Catholics. My sister and I were smart, well-adjusted, happy people. He was happy that I was happy.

That answer didn’t free me like I thought it would. When am I going to feel like my parents feel? After 30 years of interfaith marriage, they are comfortable in their identities, and in mine. They lean into space between holidays and religious traditions like sinking into a soft leather sofa. Our Christmas dinner tables are decorated with pine needles and candles, and our Passover seder plates have symbols for women’s equality and peace in the Israeli-Palestinian conflict.

We’re a comfortably interfaith family — but where does that leave me, a young woman who’s chosen one faith for herself?

Without a Jewish mother, there are large swaths of the Jewish community that will never embrace me. I always loved decorating a Christmas tree with my parents, but when I have a home of my own, I simply won’t have one. Choosing sides hurts, and living in the middle aches, too. When will I be proud of my background? Or even just be comfortable with it? It could be BC. It could be Boston. But it also could be me, forever caught in the in-between.

The paradox, however, is not lost on me: walking past neo-gothic buildings at my Roman Catholic university three years ago, I started feeling Jewish for the first time.