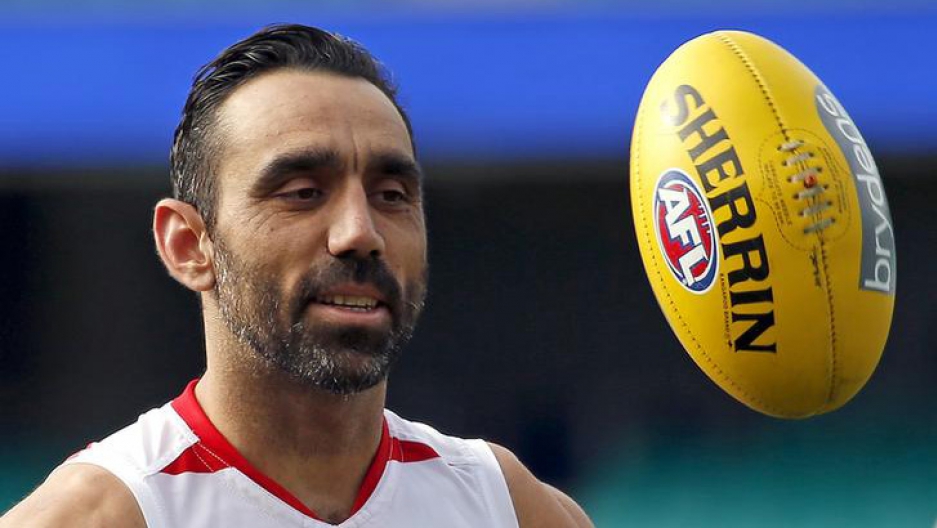 Sports fans all over the globe, no matter what the sport, boo the players. But sometimes the booing is about more than just sports.

That seems to be the case currently in Australia, where one football player in particular has been the target of relentless booing from crowds in different stadiums.

That player is Adam Goodes, a veteran star of Australian rules football. For the uninitiated, Aussie rules football is a game that kind of resembles rugby — but is much more badass.

Goodes, though, isn’t just one of the best players in the Australian Football League, the AFL. He’s one of the league’s stand-out Aboriginal players, and he’s long spoken out against the racism that many Aboriginals say is still common in Australian society.

Goodes is also the 2014 “Australian of the Year.” That’s not a sports award. It’s an honor bestowed on outstanding leaders in Australian society, representing the country’s very best.

The award was given not just in recognition of what Goodes has accomplished on the pitch — but also as a nod to his aboriginal roots and his activism on behalf of indigenous rights.

So why is Adam Goodes getting booed?  That’s a matter for debate in Australia.

Some say Goodes started it, sort of. Back in 2013, in the middle of a game, Goodes was involved in a play near the sidelines. After the play, as he walked away, a fan called him an ape.

Goodes spun around and pointed to the fan, a 13-year-old girl. Security quickly escorted her out of the stands.

The next day, Goodes held a press conference.

“Racism has a face last night, and you know it was a 13-year-old girl. But it’s not her fault,” Goodes told reporters. “It just hit me that it’s a society issue, and an issue about what are our parents teaching our kids.”

That prompted a lot of criticism of Goodes, from people who said it was inappropriate to pick on a 13-year-old girl to make his point.

Then, this year, a new incident. At a game in May, after scoring a goal, Goodes celebrated by mimicking an Aboriginal war dance, complete with the gesture of throwing a spear in the direction of the opposing team’s fans. In the game footage, you can see those fans start to boo him right then and there.

Ironically, this happened during the League’s indigenous round. That’s a week every year, when the AFL highlights and honors the contributions of Aboriginals.

That’s not relevant to those who criticize Goodes.

Former Aussie rules player and TV personality Sam Newman has said Goodes provoked fans with his war dance, and then wasn’t prepared to handle the reaction. And Newman flat-out dismisses the notion that the booing is racist.

“How gratuitously stupid is that?” he asked on his TV show recently. “ I would suggest that the people boo Adam Goodes because he’s turned their game into a political forum. And people go to the football to get away from everything, as a release. They don’t want to put up with political statements of any sort. They go there to enjoy their side playing football, and if they want to boo, they can.”

Those remarks prompted cheers from Newman’s studio audience — a good indication that he’s not alone in feeling that way. And in fact, in the stadiums, the booing of Goodes has continued.

At one point, it got so bad, and so focused on Goodes personally, that he’s chosen to sit out some games. He was even rumored to be considering retiring from the sport altogether before the end of the season.

But the Australian Football League is on his side. The captains of all 18 AFL teams issued a statement in support of Goodes. And league CEO Gillon McLachlan underscored that message:

“We’ve had a clear mandate from our industry now, that [there’s] zero tolerance to racism,” McLachlan told reporters recently. “And it’s a clear mandate that the treatment of Adam Goodes has been unacceptable. And we have to get that respect back in our game.”

Many Australian football fans agree, and have gone out of their way to cheer for Goodes.

And the player is grateful. After coming back to the game a few weeks ago, Goodes thanked the league and the fans for their support. And as for all the talk about racism and booing, Goodes said that’s a discussion that Australia needed to have.

“People have had their opinions, they’ve spoken about the issues. And hopefully now we can move forward,” Goodes said. “For me it’s about going out there and playing football. And whether this is my last year or not, I really wanna be able to go out there and enjoy the last games of the season, and see what happens.”

Goodes was already considering retirement before the booing started this season. He’s 35, and in the twilight of his playing days anyway. But he’s said he doesn’t want his career to end in controversy.

His team, the Sydney Swans, is in the playoffs. And with that comes a chance for Adam Goodes to write a different ending… on the pitch.